It’s been two years since Greg Bentley coined the term ‘constructioneering’, describing a process that aims to solve the fragmented workflow between design and construction. Greg Corke looks at how the latest developments are starting to make this joint vision of Bentley Systems and Topcon a reality

Above (and below): Aerial photographs captured by an Intel Falcon 8+ Drone – Topcon Edition, can be fed into Bentley’s ContextCapture reality modelling cloud service, via the Topcon Magnet Collage Web platform, to create engineering-ready reality meshes or digital surface models

Having a vision is one thing; delivering on it is another thing entirely. And for a vision as bold as constructioneering was in 2016, Bentley and Topcon knew the engineering and construction gap would take some time to fill. The creation of a digital twin, a design / construction model that responds to the ever changing reality on site, not only requires great technological change but a significant cultural one as well.

Projects in ProjectWise can now be associated with projects in Magnet Enterprise, making it easier to share data and then push that data out to site, as Jason Hallett, vice president of global software business development at Topcon Positioning Systems explains, “It allows a cloud-tocloud connection without actually having to move data all the time. You can have access to the data whenever you need it.”

Bentley and Topcon have also added an online cloud conversion service that Hallett says allows firms to take iModels and transform the portions they need straight out to the field for machine control or surveyors or anybody that might need it.

Constructioneering was never designed to be a one-way street and Topcon and Bentley recently announced a new integration that allows survey data to be easily transformed into engineering-ready reality meshes or digital surface models. It involves an integration between Topcon’s Magnet Collage Web platform and Bentley’s ContextCapture reality modelling cloud services.

“Big data that is collected by Topcon can be pushed through to the cloud service in ContextCapture and returned as a reality model,” explains Hallett. “The engineer can now take the reality mesh and go do something a lot more meaningful. Point clouds are very cumbersome to work with — all of us recognise that. The reality mesh is very useful, especially when you’re planning out concept designs.”

This is reality modelling as a service, where operators can upload UAV imagery direct-to-web and all of the heavy-duty processing is done in the cloud. It means firms can get results back very quickly and they do not have to invest in expensive local hardware.

This helps pave the way for keeping the design and on-site reality in sync, as Ted Lamboo, senior vice president of Bentley’s strategic partnerships, explains “Now, all of Topcon’s positioning technologies can help to continuously survey a site’s digital context, synchronising project digital twins to make constructioneering even more compelling.” 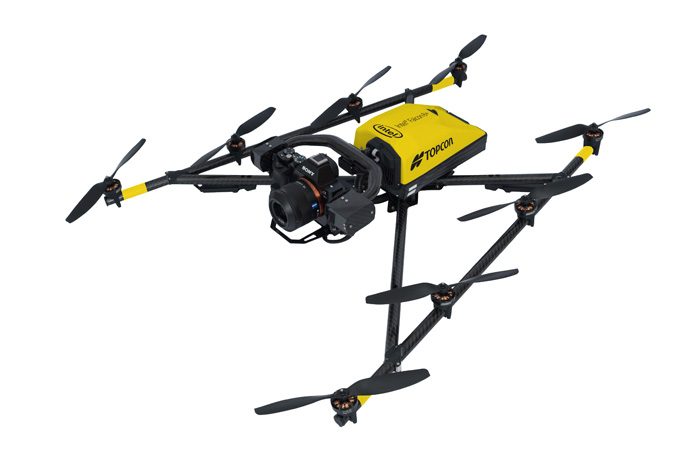 Topcon is currently developing a new service called Magnet Live which, in Hallett’s words, aids communication, data exchange and collaboration around constructible models. Much of this centres on making survey data instantly more usable, without having to change the established workflows of those on site.

“If you can go out and generate a BIM model from a survey then you can actually introduce that right into the design tools in a more meaningful way, explains Hallett. “So, as they [surveyors] are doing their traditional practices, it [Magnet Live] generates a survey BIM model.”

“They [surveyors] don’t have time to change their practices and re-train their people, so what we’re trying to do is make that more of an automated thing.”

Topcon is also looking to use Magnet Live to help contractors get more value out of construction estimation. “When you’re doing your estimating, you’re building take off models, so do that into a BIM model as well,” says Hallett, adding that by creating a digital twin at this preliminary stage helps catch potential errors much earlier on.

One of the key visions for constructioneering is for information to flow seamlessly between the construction site and the design office. The quicker an engineer gets eyes on an issue, the quicker it can be resolved and the quicker the new design can be implemented on site. Bentley’s new iModelHub, which tracks and manages change, is set to play an essential role here.

“Our future with the iModelHub and this new open source, iModel.js, will make it more real-time,” says Hallett. “As soon as the guy is done with something in the field he can say ‘here’s my survey for the day, I’ve picked that area you needed’. The engineer gets notified and iModelHub tracks the latest stuff it receives and all of a sudden, they’ve got an iModel sitting out there that represents everything that’s been done.

“You’ll get to a point where it will say ‘hey, there’s a new design’ and it pulls right in and you can see it and you can push that out to the machines.”

Topcon has been a driving force in construction automation for some time with machine control technology that guides construction machinery. Currently there still needs to be a driver in the cabin with a red button for safety but Hallett says this will evolve. “You’ll get to a point where you don’t need to have the people because when the machines are aware of the design, the constructible model, the environment around us, then you can have a safe working environment. And that will be where we go with construction and survey.”

True construction automation through the application of Artificial Intelligence may still be some way off, but the impact of AI is already being felt in some areas of construction.

“ClearEdge is used by a lot of people to make sure stuff is put into the right place,” says Hallett. “Once you start pouring concrete it gets pretty tough to change!”

It’s a very cool application of the technology he says, but there is also a huge value in applying to other areas. “We don’t typically acquire tech and leave it as an island,” he says. “[We consider] how can this augment our business and improve our workflows across the board?”

Hallett gives an example of an autonomous car driving down the street which instantly recognises ‘people’, ‘stop signs’ etc. “That’s object recognition from video and it’s not real precise but imagine what you can do if you start integrating some of this stuff.

“I always love scanning devices. They pick up so much information, but maybe I don’t need all of it. So maybe I can recognise something and only scan that.”

Hallett is being somewhat cryptic, but appears to be describing a world of automatic construction verification, where a drone with a video camera records a site, recognises features, captures specific areas precisely, then highlights any construction errors or future clashes. “Imagine what you can catch just by reviewing the iModel at the end of the day,” he says.

Topcon and Bentley still have a long way to go before constructioneering becomes a seamless workflow. But with links between their cloud platforms and extended services, they have started to lay solid foundations. Automating and regulating the flow of information is the next challenge and iModelHub and iModel.js look set to play an important part here.

The ultimate goal for constructioneering is for a continuous representation of reality, where as-built data is captured automatically and fed into a digital twin, identifying and resolving construction issues along the way. This is still some way off, and will require significant change in technology and industry, but it’s a very compelling vision the same.