To coincide with the launch of the new Intel Xeon E-2100 series processor, Lenovo has unveiled its ThinkStation P330 range of desktop workstations, which includes the tower, small form factor (SFF), and Tiny systems.

The P330 Tiny keeps the same 1 litre chassis as its predecessor, the P320 Tiny, and the accolade of being the world’s smallest workstation. The P330 Tower (18 litre) and SFF (8.4 litre) feature new mechanical designs which decrease their footprint by up to 30%.

In terms of spec, the biggest innovation comes with the Intel Xeon E-2100 CPU, which features up to six cores – two more than the quad core Intel Xeon E3-1200 v6 CPU it replaces. Four CPU cores has been the standard in entry-level workstation for over 10 years, so the move to six cores is a big step up for design, engineering and architecture firms that rely on multi-threaded applications, such as rendering or simulation.

Intel is quoting up to 1.45x faster performance when comparing the top-end model Intel Xeon E-2186G to the 2017 Intel Xeon E3-1200 v6 Processor in Cinebench, a benchmark which is representative of most ray trace rendering applications. Intel does not offer up any single threaded benchmark figures, but we expect the generation-on-generation performance increase to be small. 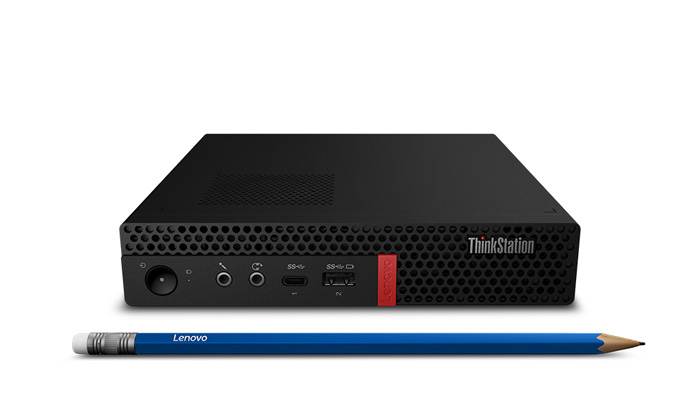 The P330 Tower and SFF workstations offer up to 64GB DDR4 memory and multiple storage bays for 2.5-inch and 3.5-inch drives as well as M.2 NVMe directly on the motherboard. The P330 Tiny offers up to 32GB DDR4 memory and up to 2TB of M.2 NVMe SSD storage.

Lenovo says the ThinkStation P330 Tiny has been engineered to go where others can’t, such as space constrained desks of CAD users, the board room of architecture and engineering firms and for STEM training and education.

The ThinkStation P330 SFF is pitched as the perfect option for customers in search of more expandability than what’s offered with the Tiny.

Lenovo says the ThinkStation P330 Tower’s high-speed processor, powerful graphics enabling access to low-cost VR, flexible storage and memory make it ideal for the small- and medium-sized firms in need of a CAD workhorse that can handle their most complex applications.