Utzon Architects and Johnson Pilton Walker, in collaboration with a consulting team including Arup, conducted a review and study of the Opera Theatre interior as part of the strategic building plan. The design team included ten engineers, two 3D technicians (architectural and structural), and specialists in acoustics, fire, and theatre planning. The teamÝs assignment was to create a base as-built model for the structural, architectural, and selected MEP components of the building.

The 1,547-seat Opera Theatre is used for opera, ballet, and other dance performances. The record information maintained by the partner firms proved invaluable in creating the Opera Theatre existing-conditions model. However, it took considerable time to sort through the large amount of historical and recent construction documentation to find the relevant information for the as-built model.

BIM forms the foundation for further internal building studies and scheme documentation, ensuring confidence in the redistribution of internal space and existing structural constraints. At the start of the project, the architect and structural engineers used a single software platform – Bentley Architecture and Bentley Structural – to ensure interoperability between their models. Later, MEP consulting engineers Steensen Varming joined the project, using the same software platform.

Because of the complexity of the acoustic panelling throughout the auditorium, the team engaged a building surveyor to conduct a 3D laser-scanning survey. The resulting point cloud, accurate to ?20 millimeters, was converted to a surface model, which became the base model for an acoustic panel model to be used in acoustic analysis software.

±Working concurrently, the structural engineer created a structural model of the auditorium bowl. The 2D and 3D survey data was constantly reviewed to identify instances where as-built information might give misleading results and require reinterpretation. Engineers also modelled the existing primary mechanical duct runs in and around the Opera Theatre auditorium to help determine where new plant rooms and duct runs could be located.

Once the combined structural and architectural model of existing conditions was complete, designers could carry out a range of potential reconfigurations of the auditorium surfaces within the overall constraint of the shell roof. The as-built model proved invaluable in documenting proposed redesign schemes. Team members could easily view where new structure was introduced, where existing structure remained, and how high-level work would relate to the underside of the shell roof. 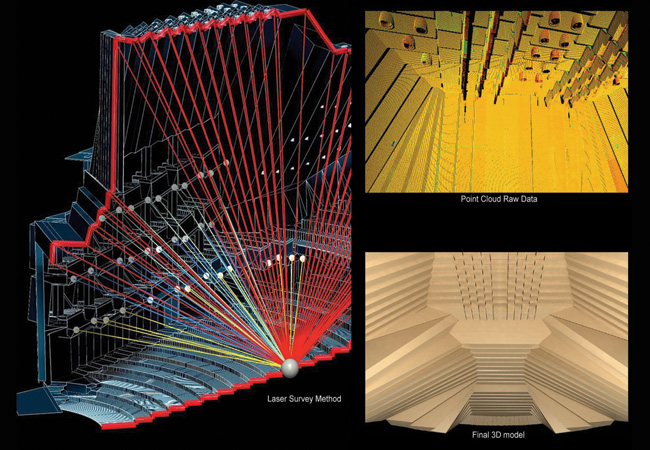 Because of the complexity of the acoustic panelling throughout the auditorium, the team engaged a building surveyor to conduct a 3D laser-scanning survey. ® Sydney Opera House. Courtesy Utzon Architects/Johnson Pilton Walker (architects in collaboration) ±Arup.

The as-built model was then used to assist in acoustic and fire simulation analysis, evacuation planning, and egress modelling. BIM information was transferred via IFC 2×3 format, or by simple DXF to non IFC-compatible analytical packages. Arup has performed significant experiments using IFC 2×3 for extensive data exchanges.

A recent addition to the Opera House, the western foyer colonnade was fully modelled in advance for construction documentation. This approach will be used for further work planned for the western foyers, which run almost the entire length of the west side of the Concert Hall. The design team found that the 3D BIM saved hours of work when creating construction drawings.

For example, 200 separate section files were created overnight when documenting the western foyer upgrade. Other planned renovations include the addition of an elevator via a new tunnel at level one beneath the western boardwalk to provide access to the box office at level 30. Future proposals include for the Opera Theatre orchestra pit to be extended and the auditorium refurbished.

The Opera House has long had challenges following the paper trail of structural and architectural documentation for all parts of the building. In conjunction with BIM, Arup also introduced a system for tagging drawing information. Structural and architectural components were assigned invisible tags that contained descriptions of the source of drawing information for that element. For instance, a wall tag contains its unique number from the original construction drawing documentation as well as associated reference information.

A custom script can then be used to generate reports listing the information in the component description tags. The reports are in HTML format with hyperlinks to a previously created CD of all Opera House structural and architectural drawings in TIFF format. ýThe model thus becomes a drawing library as well as a documentation model,¯ said Bull. ýNo more tedious searching through drawing registers for the correct component drawing.¯

Another key benefit of the BIM process was the linking of the structural model directly to the Opera House master door schedule. Considering that the Sydney Opera House has 2,200 doors, a significant amount of time is saved by providing quick access to building information. The benefit of this integrated process, said Bull, is that the model can be used for both documentation and building management, creating a powerful interactive window between the physical model and the building information data sets.

The door schedule contains information about fire compartmentation, space designations, and functional use of the space. Arup established a direct link between the model and the master door schedule database by attaching the official door number designation in the master door schedule database to the unique identifier tag in the structural model door component. This makes it possible to locate a door number in the external facilities management database and immediately view all information about the wall containing that door, as well as space compartmentation data and all asset and facility management information.

Currently, the Opera House Facilities Management Group is looking at designing an intranet system that will use the continually growing 3D building model as its backbone. All information held by the Opera House and generated by external consultants and subcontractors will be stored in a central server database. Opera House staff, external consultants, and contractors will be able to access this large composite set of building information. This system will also allow data mining that may reveal seasonal trends and permit earlier identification of potential operational problems.

With this BIM-based system, the Opera House guardians will be well positioned to modify the building to meet changing needs while preserving the unique characteristics that make it a national and world treasure. Thirty-four years after its completion, the Sydney Opera House remains a pioneer of innovation.