When the idea of building information modelling (BIM) was first introduced, it was met with a healthy scepticism. However, suddenly the coin has flipped. An increasing number of large firms have already adopted the method of working and now smaller practices and consultancies are following suit.

One of the reasons for this is the introduction of structural engineering BIM tools. A key benefit of BIM is the ability to share digital model data amongst the design team – and when structural engineers have the right tools to be able to add their data to the single model, the entire concept begins to make sense.

However, the more disciplines that access and use the building information model, the more opportunities there are for error and corruption. So, how can the integrity of the build

ing information model be maintained during the structural engineering process? BIM is a building design and documentation methodology characterised by the creation and use of co-ordinated, computable information about building project in design and construction.

The BIM model can contain data for all parts of the building including architectural, structural and building services information at any stage of the project; prior to construction, during construction and post-construction.

ItÝs easy to see why BIM has been popular with building owners as it brings many benefits to a project as a whole. For example, the ability to track changes between individuals within a single office and even between disciplines.

An engineer receives the building information model from an architect and then changes the size of a certain structural feature to ensure its strength. When the model is sent back to the architect, the changes are automatically updated in the architectÝs building model.

It also helps productivity levels because of the need to develop only one model instead of several in each design discipline. However, what is becoming increasingly clear is that the method also brings significant rewards on a day-to-day basis, for the engineers within their own office.

The first stage of the engineering process is usually to rationalise this data to produce engineering data. Such data includes initial ýguesstimates¯ of beams/columns and the position of beams, columns, floors and walls in 3D, plus any other features that affect the overall stiffness of the structure, such as openings in floors and walls.

A particular challenge in creating the structural model is that that the engineer is not really – at this initial analysis stage at least – interested in the exact shape of an element, but rather the need to represent its position in the 3D model. Its centre line (as represented by the architect) does not necessarily correspond to the desired position in the analysis model.

A similar problem occurs when considering walls and slabs of differing thickness. For example, a wall from the first to second floor is often thicker than the corresponding wall from the second to third. In an architectural model, this would be represented as ýin reality¯.

However, if an engineer considers the centre line of each wall, it can be seen that there is no continuity between the two walls. A normal approach by manual methods is to move the wall in the analysis model to ensure continuity. 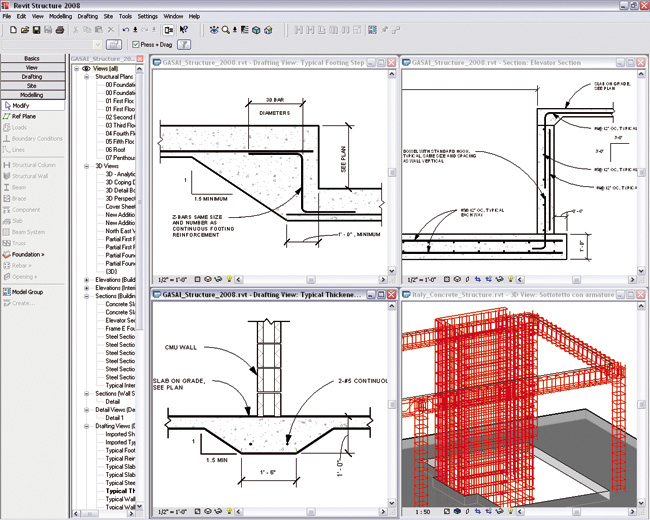 Typically, engineers make assumptions in order to simplify their calculation models. These sometimes involve making the model smaller, and therefore faster to run, or making the model more suitable for the particular chosen analysis solution. It is also common for them to use ýengineering judgement¯ to satisfy the limitations of the analysis solution and the shortcomings of many finite element ýmeshers¯ in structural analysis solutions. For instance, they sometime ignore holes in walls and floors, simplify the shape of holes or surfaces (rectangular versus their true shape) or assume that curved walls and floors are in fact made up of many straight faces.

While the majority of these assumptions are perfectly valid when considering an analysis model in isolation, discrepancies can occur when considering the entire building information model. For example, if an engineer needs to manually change the attributes of a model just to satisfy the limitations of the analysis program, then how does that affect the update of the building information model and how is that information relayed to other members of the design team?

To prevent compromising the overall building information model, the engineer must, therefore, ensure that the chosen analysis solution is capable of directly analysing any shape of structure. Even the simplest architectural model will produce complex structural models, with features such as curved slabs or non-rectangular openings. How many architects produce buildings only with rectangular walls and no openings?

The only way that an engineer can meet these challenges is with the right software so that the generated structural analysis model accurately mirrors the ývirgin¯ data. This is certainly true for obvious displayed information but it is also important for ýnon-cosmetic¯ data too.

We must remember that exchange of data in the BIM process rarely happens only once and that it is common to iterate between documentation and analysis models several times during the design process. In this scenario, it is important to retain data that is crucial to the analysis program, but irrelevant to drawing production.

Structural engineers can benefit greatly from BIM ± as can the whole design process. However, it must be remembered that even a very basic architectural building information model can produce complex analytical solutions that the engineer must be prepared to analyse directly using their chosen analysis solution. The best new design software enables engineers to rationalise the analytical representation before transfer to their selected analysis application ± yet the selection of an analysis program that is capable of dealing in complex geometry ± such as Robot Millennium from Robobat – will minimise the need to take such action. By adopting such analysis solutions, the structural engineer can become a key part of the BIM process.