While many big CAD vendors wielding hefty corporate marketing budgets have come and gone in the past 20 years, small developer Robert McNeel & Associates has managed to carve out its own niche with Rhino and AccuRender. Martyn Day recently visited the companyÝs Seattle HQ.

Having written about CAD and design technology for the best part of twenty years, you canÝt help but get very familiar with the inner workings of the CAD developers, how development happens, marketing is oriented, and how the route to market and sales are achieved.

There are a few basic models and principles that seem to permeate through 99% of the industry. But then there is Robert McNeel and Associates, a company that appears to swim against this tide like an Alaskan Salmon dodging all the hungry bears to the spawning grounds. The consensus from competitors is that it shouldnÝt exist the way it is run, but somehow it does and very successfully.

IÝve known Bob McNeel for the best part of my journalistic career and you donÝt have to look much further to discover the reason for McNeel & AssociateÝs different take on the market. Bob McNeel is a trained accountant who fell into what turned out to be a very successful AutoCAD dealership in Seattle back in the Ùgood old daysÝ of early AutoCAD.

McNeel hit my radar when his company started to develop AutoCAD add-ons and I reviewed AccuRender, its photorealistic Ùinside AutoCADÝ renderer when it was launched in the UK market. 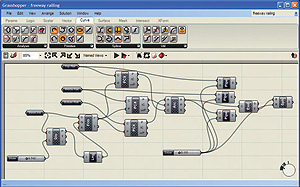 Users donÝt need to know how to program to create a parametric model using Grasshopper as there is a window for creating what amounts to a bank of geometry Ùeffects peddlesÝ, as you would with a guitar.

A few years later McNeel began to develop a 3D NURBS (Non-Uniform Rational B-Spline) modelling package named Rhino. For years it was in development and the betas were all given away for free. I remember talking with Bob McNeel on what the give-away business model was about.

At that time nobody gave software away and people were telling him that he was insane to do it. Bob was happy to get the software out there for people to find uses for it and let that drive development. After three years Rhino eventually went commercial for a very reasonable price and, against all odds, the people who had been using it for free started to buy it. Today, McNeel claims to have 250,000 Rhino users worldwide, covering diverse industries such as marine, apparel, product design, jewellery design, analysis, CAM and architecture.

McNeel & Associates is now out of the AutoCAD dealership game. Autodesk moved to limit dealers selling out of fixed distance from their offices, which reduced their potential to grow, unless they opened multiple offices. Then the move to AutoCAD verticals arrived, with ever increasing targets, and with the Rhino software business growing the AutoCAD/ Autodesk relationship terminated. However, old and new clients still request AutoCAD training on old versions of AutoCAD.

Since Rhino was launched, McNeel & Associates has built a whole ecosystem around Rhino and its rendering products. In many ways itÝs like Autodesk in the early days, with the vendor working on the core product and the third-party developers plugging into the application and adding functionality to tailor it to a specific vertical. There are already well over a thousand developers working with Rhino and extending its functionality around the world. McNeel has also expanded its range of products, adding other animals, such as Flamingo, a ray trace and radiosity rendering engine for Rhino, and Penguin for a conceptual sketch look and feel, as well as stylised renderings.

Then there is Bongo for animations and Brazil, a Splutterfish rendering add-on for Rhino. For those with multiple licenses, there is a product called ÙZooÝ to manage your software.

McNeel and Associates continues its commitment to broad free beta software and within weeks of a release being formalised, the next generation of technologies under development usually get shipped as a beta. With Version 4 out, version 5 is available on the companyÝs Labs page.

For those of us that are long in the tooth, and pre-dating McNeelÝs fascination with animals, AccuRender was probably the first scan-line rendering application we used in AutoCAD. It had fractal trees, textures galore and quick results. Even though Autodesk competed aggressively against it, it ended up owning its own OEM license when it acquired Revit, as AccuRender was built-in as the default renderer.

In fact, Autodesk has only just replaced AccuRender in Revit with mental ray. That actually seemed to nark Bob McNeel as Autodesk failed to update the rendering engine for years, despite their license agreement allowing them to include the latest versions.

While the name might be old, the technology is not and has always been updated. McNeel and Associates has expanded its reach too under the guise of AccuRender nXt ± the next generation. Scheduled to work with AutoCAD 2007- 2009, AutoCAD 64-bit, SketchUp, Revit, Rhino and IntelliCAD, the next AccuRender is in development and beta participation is free.

There is a brand new engine, which runs four to five times faster, is capable of working on larger models with support for multi-cores and handles threads a lot better than previous releases. The new algorithms anti-aliased image quality is looking very good already and renders are continually refined until the user stops the process. You can expect better tone reproduction and materials, fewer artifacts and a new User Interface. Daylight renders benefit from a new HDR algorithm, with better indoor day lighting too. Indirect lighting without using Radiosity is also possible.

The big news is that there is a new animal about to emerge: Grasshopper. Again a technology for Rhino, Grasshopper was a development preciously named Explicit History and targeted Generative design. For those familiar with BentleyÝs Generative Components, Grasshopper is along those lines but without the programming. Bob McNeel calls it Visual Basic, without the Basic.

There has been a lot of interest in Generative design systems in the architectural world. Dr Robert Aish, while at Bentley, came up with Generative Components and now Autodesk has hired him he has a similar task to perform using AutodeskÝs technology (we presume built-on either Maya or 3ds Max).

Generative systems so far all require expertise in both geometry and programming, to write the applications that either derive the form or give the software boundaries and geometric relationships to allow designers to interact with the framework of a design.

With Bentley already there and Autodesk in hot pursuit I was pretty amazed to see an early demonstration of Grasshopper in Rhino last year. The output appeared to be similar to GC but the way the scripts are generated was amazingly Ùplug and playÝ. You donÝt need to know how to program to create a parametric model using Grasshopper as there is a new window for creating what amounts to a bank of geometry Ùeffects peddlesÝ, as you would with a guitar. You take the input, which may be a line and you literally plug it into an effect, which can be any kind of mathematical transform, and which can subsequently be plugged into other mathematical effects peddles, all driving the creation of a script (in the background) that drives RhinoÝs geometry engine. ItÝs all drag and drop and plug and play.

The system uses some specific terms, namely Parameters, Components and Connectors. A parameter stores data; a Component contains an action; and a Connector connects ÙIns to OutsÝ or ÙOuts to InsÝ. 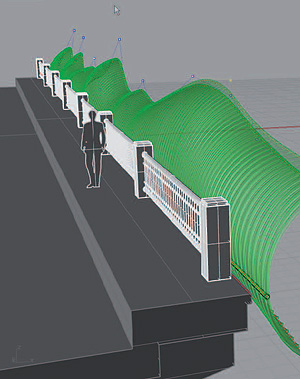 The Components can be selected from a range of mathematical functions (Tan, Cos, Pi, Divide, Sine, Log etc.) or entered by the user with X, Y and Z. Variables can be assigned to sliders allowing you to play with the important underlying geometry. One other interesting way of driving the system is the ability to draw curves and plug those into the effects boxes. So while you might not know how to fully express an equation, you might be able to draw the output or input that you want. I have not seen anything like this in GC.

What you end up building is a series of wired up boxes which drive the geometry creation. This could be merely to create a form or to make a dynamic environment ± perhaps a planar wall that deforms when placed in proximity to another piece of geometry. All the time the Rhino viewport displays the results of this plug and play visual scripting, giving constant feedback.

The great news is that, as this is McNeel & Associates, Grasshopper is free and is considered part of the core program. With the sheer number of Rhino users in architectural firms and its position as a mainstay in Universities, expect to see a lot of users adopting Grasshopper for Generative design.

Bentley recently introduced a $250 downloadable version of Generative Components to spread the word (which actually includes a full copy of MicroStation, but is only functional in GC mode). It seems that the fight has been joined at the ÙgrassrootsÝ level of adoption. Perhaps this is the reason behind the naming? Although Bob has mentioned that in the 70s TV series there was a character referred to as Grasshopper ± the loan Kung Fu monk who always sorted out problems – and I can see how Grasshopper could be seen as Kung Fu for architectural geometry!

While many industry people thought Bob McNeel was mad to give away Rhino for so long, youÝd be hard pushed now to find a CAD software company that doesnÝt give early versions away on labs to measure reaction. AutodeskÝs path to volume is to trial the software on its labs site and then launch and sell rev 2 of the product. 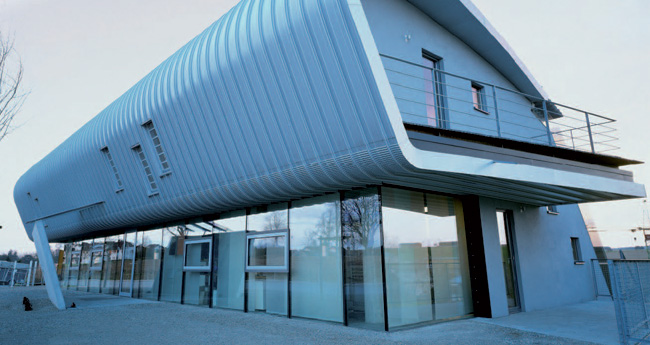 Even now, the rapid appearance of the Rhino version 5 beta, just as Rhino 4 ships is unheard of. ItÝs based on really enthusiastic users always wanting more and happy to play with forthcoming technology. However, again, to be doing this without a subscription model in place would have the big CEOs weeping into their cornflakes with all that missed opportunity to ratchet up the income dollars.

When I arrived in the offices of Robert McNeel & Associates in Seattle, Bob was on the phone, telling the caller that Rhino probably wasnÝt the best option for what they were looking for and that he (or she) should probably look for a specific vertical application for the industry that they were in as it might do more. Throughout my two days with Bob and the development team I was trying to figure out why this laid back approach to developing and selling CAD tools worked. In the most capitalist nation on the planet McNeel is an anathema to corporate culture. There is almost a total lack of greed and itÝs incredibly refreshing.

While CAD vendors spent millions in marketing, McNeel & Associates doesnÝt, instead preferring their customers to be the productÝs ÙmarketeersÝ, spreading the good word by mouth and if thatÝs a slow process then so be it. The McNeel ethos is to listen to the customers, help customers, because if the customers are happy, the products do well. ItÝs not about milking customers.

To date, McNeel & Associates has done well to stay below most of the big CAD vendorÝs radar but with increased market coverage and new products that directly compete, like Grasshopper, the company is bound to become a competitive target. Can these vendors compete against the mature, low-cost products McNeel creates or establish such a community of happy users to drive development? Somehow, I donÝt think Bob has sleepless nights in Seattle over it.

BIM for fabrication
A level-headed approach to BIM
Heritage and BIM
BIM for temporary works
A virtual night out
Off the Grid: virtualisation
Canal concept
Moving beyond conceptual design with simulation
Previous Post
Next Post