It doesn’t really matter what core modelling tool you use, Chaos Group has a plug-in product product for you. Whatever your poison — Rhino, Revit, Unreal, Blender, Maya, Max, Modo, even Form-Z — there is a flavour of the company’s flagship V-Ray physics-based renderer to plug-in and generate some amazing photorealistic images and films.

With a passionate community that laps up every update and every millisecond saved per render, Chaos Group has accidentally morphed its annual local user event into a huge international conference with lots of workshops. Called, of course, ‘Total Chaos’, the event is held in Bulgaria’s capital city, Sophia just down the road from the company’s offices. This year it featured over 900 attendees, with over 50 sessions, featuring 77 speakers over two days. As many rooms and workshops run simultaneously, sometimes the event can live up to its name, especially if you don’t plan your agenda in advance.

After a day of masterclasses, the two day conference kicks off with a keynote from Peter Mitev Co-founder and CEO. This year the company had refreshed its product line with its next generation renderer, V-Ray Next, delivered for V-Ray and Corona for Cinema 4D users. It also entered the real-time world of VR with V-Ray for Unreal, expanded its materials development with its VR Scans business and launched Chaos Cloud.

Paul Debevec from Google Daydream gave a fascinating talk on his development work on HDR 360 panoramas and lightfields which has been used in everything from films such as Gravity to Smithsonian VR installations.

Co-founder and CTO, Vlado Koylazov gave a technology deep dive into where V-Ray is going next and the technology under the hood. This year it was about the development of super-fast V-Ray Next which has been delivered throughout this year and is now receiving updates and refreshes.

Attendees to the event come from all sorts of backgrounds, CG artists, architects, engineers, product designers and software developers. To reflect this, the sessions are broken down into three simultaneous streams – Art, Craft and Code. Here you can listen to CG artists, skilled VR environment designers, cloud computer specialists, FX specialists, architects, scientists and software programmers. It’s possible to go as deep into the technology as you want, or just watch an incredible artist talk about how they created their images.

Chaos Group has made 31 of the talks, which could pass copyright clearance, publicly available on YouTube here.

With so many speakers, three simultaneous tracks, an exhibition, coffee breaks, lunch breaks, and evening social gatherings, Total Chaos is a completely immersive experience and you are guaranteed to come back with industry friends. Being held in Sophia, the Chaos Group development teams are all on hand to help and advise and rarely for software company, they love to show software that is still in development.

We highly recommend a trip and we guarantee you will love the city and the people. 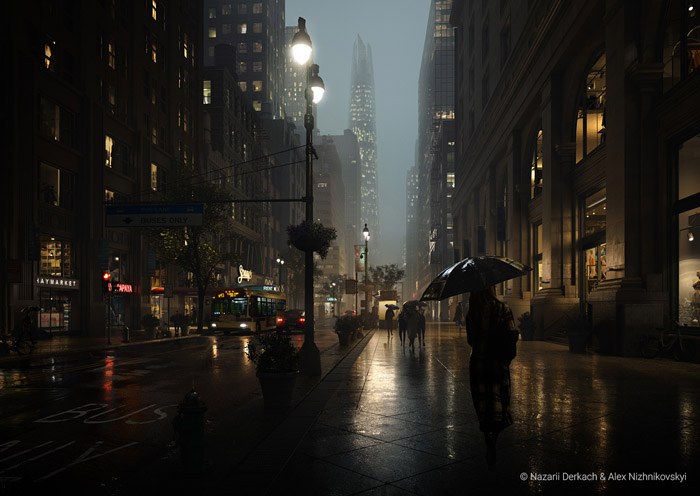 At Siggraph this summer, Chaos Group demonstrated some new features to its Project Lavina, which can ray trace massive V-Ray 3D scenes using GPUs without workarounds or any complex setup. To prove this point, the company showed the fully interactive manipulation and subsequent rendering of a 1-billion polygon KitBash3D city.

V-Ray Next for Rhino has just received its update 1, which brings faster CPU renders, updated materials workflow and support for a more advanced computational geometry engine. It also supports Grasshopper animation and has better support for V-Ray materials . Highlights of the update can be seen here youtu.be/mxTv6cUZIww

Arch Viz master artists, Beauty and The Bit, brave the intersection between architecture, cinema, VFX and video games. B&TB Art Director, Victor Bonafonte, talks about some of the studio’s secrets and shares the artistic approaches behind their work.

Ian Spriggs, is an absolutely amazing portrait artist who chooses the medium of CG to express his work. His portraiture work is fantastic, especially considering how long and how badly the rest of the CG world has been at painting the human form

Alex Coulombe is the Creative Director & Lead XR Developer at Agile Lens: Immersive Design. He looks beyond the role of Virtual Reality as an arch viz tool, and how it can be used throughout the design process.

Andre Matos has one of the sweetest jobs on the planet — he creates ultra high-resolution images for Porsche. Working in absolute secrecy, Matos gets to create many of the images for pre-launch cars using V-Ray GPU and VRscans.