As part of the refurbishment of Sheffield City Hall, one of Sheffield’s key multi-use venues, international consulting firm Arup was brought on board to introduce a new full fresh-air displacement ventilation system to the 2,300-seat Oval Hall.

How do you test the effectiveness of something you cannot see? That was the task that faced engineers at Arup, the international consultancy firm. Arup provided engineering design services for the refurbishment of Sheffield City Hall, one of Sheffield’s key multi-use venues. The ú12.5 million refurbishment project brings better patron access to seating and facilities, improved performer areas, new balconies and seating, and advanced conferencing and IT equipment.

Arup’s design included the reuse and adaptation of many of the Hall’s existing work ventilation ducts and risers. A major part of Arup’s proposal was the construction of a new timber-framed floor plenum in which individual seat diffusers would be located.

To help understand the airflow systems, Arup created a CAD model of the Oval Hall in Rhino CAD based on 2D AutoCAD data and other information. The initial CAD model took three days to construct and was particularly complicated due to the curved seating and roof, and the high level of detail required for the pedestal, floor and step-mounted diffusers for the CFD mesh.

Since the hall is symmetrical, the Rhino model was divided in half and imported as an STL file into Harpoon automatic CFD meshing software from CEI. Harpoon generated a hex-dominant mesh with trimmed cells, and prism layers were applied in the areas where necessary to maintain a good wall function in the CFD analysis. The final model contained four million fluid cells.

“During the CFD analysis, we refined the CAD model and meshes several times,” says Darren Woolf, an Associate with Arup. “Harpoon’s mesh generation speed allowed us to deal with these iterations with minimal time delay.” 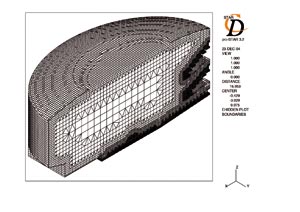 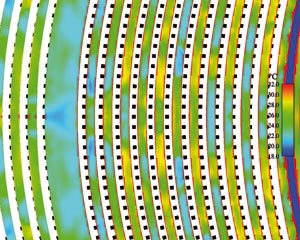 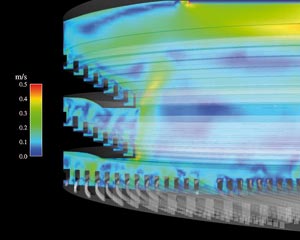 The surfaces of the auditorium were initially modelled as resistive surfaces with fixed adjacent temperatures, since all surfaces were internal and not exposed to radiant heating or cooling from outside weather. Arup later adjusted this model to allow for radiant heat transfer between the surfaces and internal objects, in particular the ceiling and audience.

The fully meshed model was imported into STAR-CD for CFD analysis. Woolf and his team used existing and estimated new heat-load data to create the heating and cooling scenarios within the Hall. During the analysis, cases were explored using a full auditorium with lights and other heating elements. Cool air was supplied at seat level and extracted above, a direct inverse of the previous system.

Based on the CFD results and EnSight visualisations, Arup discovered that the system produced good mixing throughout the main auditorium, but there was a heat build up toward the back of the balconies, in particular the lower balcony. Despite this, Arup’s solution was workable, since the overall comfort conditions in the higher occupied zones showed a significant improvement over the Hall’s existing system.

“We used EnSight visualisations to confirm our initial design ideas and highlight a few compromise areas,” says David Clixby with Arup. “Having these images at our fingertips helped our credibility in client and project sponsor presentations.”

Restoration and improvement efforts to the Sheffield City Hall are still underway. The Hall will re-open in October of this year, when it will once again play host to nearly 400 events a year – from conferences and concerts to bar nights and dances.