Randall Newton reports from the recent Hackathon event in Seattle, which aims to get people from various AEC disciplines together to think about new technologies in new ways

An AEC Hackathon is like no other AEC industry event. The most recent gathering in Seattle included carpenters, programmers, software vendors, general contractors, urban planners, real estate managers, and many other professionals in the wide spectrum that exists between napkin sketch and demolition.

The setting was a large shop in which all the equipment was pushed to the side to make room for benches, chairs, and tables. A gantry crane emblazoned with a giant purple W — for University of Washington — lurked in a corner, a symbolic triple reminder of AEC industry physicality, the event location, and the intellectual passion driving the event.

A one point during the three-day event, the presentation subject was the role of virtual reality in design/build/sell. A member of the audience asked a straightforward question: “Paper to eyes is still a major use of drawings in this business. What can we do to change things?” The answer came not from the speaker but from another member of the audience:

“We can’t change the world using the same language that got us here. We should not call them drawings anymore. Until we have a single source of truth for thousands of apps to access and use equally, we haven’t gotten there.”

This was an example of the kind of dialogue that took place all weekend long at AEC Hackathon Seattle. The April 2019 event was the 41st gathering of an international grassroots organisation launched in 2013. AEC Hackathon “is dedicated to hacking the $10 trillion building industry,” says co-founder Greg Howes, a Seattle area residential builder who also owns a timber fabrication company. Howes has attended “almost all” AEC Hackathons. With the help of a cadre of co-founder enthusiasts who include an AEC startup CEO, and a Smart Cities consultant, these three-day-weekend events pop up several times a year across the globe. Other board members who travelled to the Seattle event were Damon Hernandez, AEC Hackathon Executive Director and a programmer at Samsung USA, and Steve Holzer, founder of BIMobject.

The 2019 lineup began with Copenhagen and Silicon Valley; other AEC Hackathons this year are scheduled for London, Shanghai, Helsinki, and Austin, Texas. Each will be organised and hosted by locals.

Like hackathons in other fields, teams form at the event, work on a project for the weekend, and compete for prizes and recognition. The goal is to get people from all the various disciplines in AEC together to think about new technologies in new ways.

The events are designed to benefit both the regional AEC community and the industry at large. Most speakers and sponsors are local, while attendees are a mix of regional enthusiasts and passionate software developers and other AEC professionals who might be from anywhere. Of the approximately 120 attendees, at least 15 travelled more than 500 miles to participate in the Seattle event; a few flew in from Europe and South America. Primary sponsors for the Seattle event included Microsoft, Unity Technologies, the University of Washington, Zillow, BIMobject, Magic Leap, HTC Vive, and Autodesk.

The AEC Hackathon website lists 182 present and former corporate sponsors. Those who formed project teams had from Friday evening to Sunday afternoon to plan, code, and test their ideas. For those who were not on coding teams, there were several panel discussions and presentations scattered through the weekend. 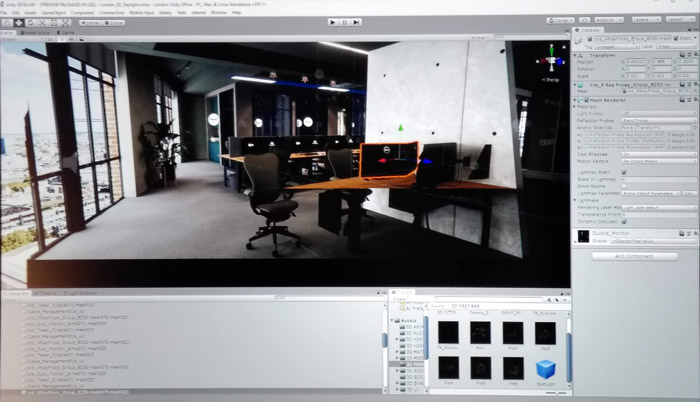 Game engine developer Unity was on hand to provide technical support to any development teams wanting to add visualisation to their efforts. A Revit-Unity connection was demonstrated; the app will be formally announced soon

A few years ago a few cutting edge architectural firms experimented with using game engine technology to take architectural visualisations to the next level. The advantage in using game engines to drive visualisation is the ability to offer real-time rendering so that a viewer can choose their own path and own view of a project instead of watching an pre-recorded animation. Now the two leading commercial game engine companies — Unity Technologies and Epic Games Unreal Engine — have launched initiatives to serve AEC. Game engines already have hooks to virtual/augmented reality viewing devices as well as computers and mobile devices.

The goal of using game engines for visualisation is to have one visual pipeline that can show clients how the boardroom chandeliers will catch the morning sun and at the same time help structural engineers understand how the curtain wall needs to interact with those same ornate ceiling fixtures. “Don’t put a skyscraper in Unity,” Schoennagel says. “No game engine can render that.” The goal is to make changes in CAD and see them immediately in the Unity viewer.

Unity and Autodesk announced a collaboration in 2018, starting by working together on a FBX importer (the file format used by 3ds max and Maya). In the initial release, changes to FBX models update in Unity automatically. “It is great for game developers, not much for AEC,” notes Schoennagel. Coming soon is a round-trip workflow for Unity and Revit. “We are working with Autodesk at source code level,” Schoennagel says; “generally Autodesk doesn’t work that closely” with other vendors. Schoennagel says the goal is to make an official announcement about the new app at Autodesk University London, 18-19 June 2019.

Schoennagel also lauded a third-party Unity plug-in. PiXYZ (“pix-zee”) can export an IFC model from Revit for use in Unity. It eliminates the use of 3ds max as an intermediary, and features a rule engine to optimise what details need to appear in the visualisation and which ones can be ignored.

New to the AEC Hackathon movement was the participation of real estate and finance professionals. A panel discussion on the subject was wide ranging, with topics as diverse as “Certainty as a Service” to the potential of blockchain technology to sort out the residential financial services supply chain. Drew Meyers of Geek Estate defined Certainty as a Service happening when Real Estate sales agencies buy houses and build an inventory, as opposed to only representing owners in the sales transaction. Meyers said Certainty as a Service was being driven by “i-buyers,” busy young professionals who want to choose a house online and close the deal instantly, instead of touring homes for weeks or months only to be beat by a competing bid when they make a selection.

Such fast-paced buying may be one way blockchain technology makes an impact on the real estate industry, says Mollie Fadule, a partner at equity and venture capital firm Cephas Partners. “Digital trading is coming,” Fadule says, as real estate and financial transaction technologies merge. The question becomes, “how do we use ownership to track and support?” all stages of the financial side of AEC.

After a weekend of working, the Hackathon teams revealed their work to the conference and to a panel of judges. To speed things along, only judges were allowed to ask questions after each presentation. A percentage of ticket revenue was equally divided among those who won an award, netting each team about $250. Notable projects include:

New World Coordinates: A Hololens-based spatial tracking system to identify and virtually transport the viewer to a construction site with a reported issue.

Work Nest: A construction dashboard in virtual reality, with the Home setting of a soothing workspace. Portals in the Work Nest lead to real-time video of construction sites. A potted plant in the Home space would begin to wither if a job was falling behind schedule.