The recent launch of OS Net brings real time kinematic (RTK) GPS to the field and site surveyor and centimetre level positioning. But what does this mean to those in the construction industry?

Previous articles have focused on exploiting and integrating existing detailed digital mapping in your GIS and CAD applications. Most CAD and GIS users work with and around or actually also carry out site surveys. Many are thus aware of the potential errors in such data and what needs to be done to eliminate or remove the different types of error.

The advent of GPS technology in the 1980s, combined with the ever shrinking size of the equipment and corresponding increase in performance and processing power, brought centimetre accuracy to the desktop and, for those prepared to invest, to the top end of the profession. The recent launch of OS Net as an adjunct to all Ordnance SurveyÝs other data capture and distribution capabilities now brings real time kinematic (RTK) GPS to the field and site surveyor where previously only differential GPS (dGPS) existed. This article explores what this might mean to the readership.

What is OS Net?

GPS technology has changed and continues to inform the way we understand our position and the way we do things. ItÝs a technology now enjoyed by almost everyone in Great Britain (in some way or another) but GPS as it currently stands only delivers positional accuracy to around 10m or more. OS Net takes raw GPS data and through building complex error models can provide real-time centimetre level positioning to those with the appropriate equipment.

OS Net is a national GPS infrastructure and service developed by Ordnance Survey to provide up to 1cm accuracy real-time positioning to the map base (and thus to OS MasterMap). OS Net is not directly available in the marketplace (see later) but should be seen as the enabling technology that serves application markets via the services that Ordnance Survey partners build on top of OS Net.

As a nationally consistent source of position referencing, OS Net implicitly supports local and national applications that require a positioning element enabling quicker and easier positioning and the use of a common coordinate system. 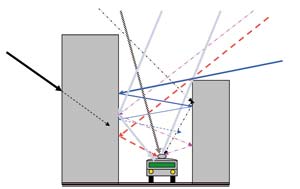 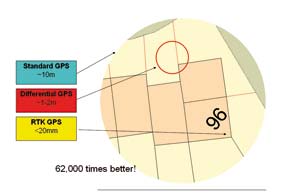 The network is made up of more than 90 permanent GPS base stations at a density that enables RTK positioning services across most of the country. From the observations made by these stations errors can be calculated in the GPS system to provide a range of correction services that seek to rectify the majority of errors caused by the satellite orbits, clocks and the atmosphere.

For the technically minded it is worth noting that RTK initialisation time is less than a minute, with RTK rmse (root mean squares error, the standard mechanism of error measurement) horizontal accuracy being 1-2cm and vertical accuracy 3cm with a precision of less than 1cm. Pre-launch tests revealed that 95% of the 2D error vectors are <= 35mm and 95% of the height errors are <= 65mm. Also, the accuracy of test points on the outside of the network of base stations or in sparse regions was seen to be negligible. OS Net also includes dGPS services whose positioning accuracy is sub-metre (down to about 20cm). Figure 1 illustrates what this meansÍ

What does OS Net enable?

OS Net as a service is not available commercially, however, the reason this is now of relevance to users is that Ordnance Survey has commodotised the service to allow partners to utilise this network data to develop and provide a basket of real-time and post-process GPS correction services from 20mm upwards to customers within a wide range of markets.

Ordnance Survey will maintain the accuracy and quality of geodetic calculation within the network, while partners will in the same way as Ordnance Survey does, use advanced software tools to create models of GPS errors. Once these errors are known, corrections can be calculated and then services transmitted to customers or their contractors in the field to improve their positional accuracy.

Ordnance Survey has already reached agreement with at least two major survey equipment manufacturers to enable them to license OS Net. At the moment this is done on a per device basis so that users request the appropriate software post-processing module. This is a revenue opportunity for Ordnance Survey and its partners and one that brings real productivity benefits to users:

• reduced hardware costs (only one receiver required, no base station)

l direct linkage through the licensed service to GB National Grid and the Ordnance Survey height datum via OSTN02 and OSGM02.

Licensing of RTK GPS correction services changes the way surveying is carried out, increasing the value of the surveyor and offering up a more flexible and efficient data capture environment.

Certain users, for example those developing new applications, the Met Office and academics are able to register for access to these services. And for others Ordnance Survey continues to offer a free service for post-process applications maintained (using readings every 30 seconds for correction to the national coordinate reference frame) from www.ordnancesurvey.co.uk/gps .

Leisure and some other users of GPS labour under the misapprehension that GPS is always precise and accurate (and many donÝt know the difference but thatÝs another story!). In fact GPS signals deteriorate quite easily in certain environments, notably urban canyons and under vegetative cover (and under water without an antenna!).

Figure 2 illustrates the problem and users should be aware that while OS Net can improve the position you get from your GPS, but it doesnÝt help you get a position / get more satellites! A similar situation occurs in forested and wooded areas, one that can in part be resolved by fixing an antenna to a telescopic device.

You wonÝt need this article to spell out the obvious ones in the construction industry but a few tangential ones are worth mentioning:

• Underground assets/utilities ± where OS Net has been used, utility networks will be very accurately positioned in three dimensions and thus should come more cheaply and easily constructed and maintained (lower works costs, interoperability with other networks owing to use of ETRS89)

• VISTA – The DTI funded Vista Project (visualising integrated information on buried assets to reduce street works) looks to develop methods to bring together utility asset records and link them to new surveys. Technologies like GPS will play a key role in locating and relocating these assets.

The future of satellite navigation could mean that there are 60 to 80 usable positioning satellites in orbit by 2012, compared to the current crop of about 24 GPS satellites. This will mean much better availability in built-up areas as well as quicker and more accurate positioning. These extra satellites come from two sources:

• GLONASS is the Russian equivalent of GPS. There are currently nine working GLONASS satellites in orbit; new funding could mean that this is increased to 24.

Once dual GPS/Galileo receivers are fully available and Galileo satellites are starting to be launched, Ordnance Survey will plan to replace the OS Net base station infrastructure with GPS/Galileo receivers. These receivers may also be able to receive GLONASS signals. This is planned to happen in late 2006-07 and will mean that OS Net is able to generate corrections for whatever type of receiver a user has. A second re-equipping of the GNSS (Global Navigation Satellite System, generic term for GPS, Galileo et al) infrastructure will probably occur in about 2013, but it is seen that there will be little change to the functionality of the receivers and the end-products that they could offer.

For those of you wondering why Ordnance Survey bothered with OS Net when Galileo and EGNOS (an advanced differential GPS service using geostationary satellites already built into many receivers) were slowly creeping over the horizon then the reality is that the infrastructure being marketed as OS Net was already a key enabler for Ordnance Survey themselves and that in bringing it to market the best interests of users and of joined up government can begin to be served immediately.