While MicroStation was almost totally re-architected in the V8 release, with Bentley adding considerable new functionality and a powerful new file format, the graphics engine had yet to be replaced and the interface was ÙtiredÝ by modern standards. XM is the completion of this work, with some new features to boot.

Unique at the moment, MicroStation can load up a PDF and use the engineering information as a reference file, here providing the plan of a building which has been modelled in 3D in MicroStation V8 XM

ItÝs taken five years to deliver and has been completed over two major releases, but Bentley SystemsÝ MicroStation has been rebuilt in front of the eyes of its customers, while many of them were actually sat on top of it! To look at MicroStation V8 XM (the most recent update) on its own and judge what Bentley has been doing with MicroStation would be wrong. First off, itÝs worth having a mini-recap of what was added in the first instalment of V8, V8 2004 Edition and then V8 XM Edition.

One of the key technologies in the V8 Generation, as Bentley called it, was the adoption of a much better way to work with its nemesisÝ CAD file format, DWG. For many years, MicroStation customers had some support for DWG provided by Bentley but the company was always under fire for the ease of use and lack of success that customers were feeling around integrating into a DWG-based workflow. For V8, Bentley pulled off a pretty impressive feat – it took the feature set of AutoCAD and most of its entities and added them into MicroStation, together with historical MicroStation commands and new V8 functionality. In many ways V8 was a super-set of both products.

According to Joe Croser, BentleyÝs Global Marketing Director for Platform products, ýWe develop software for the worldÝs infrastructure – projects are large and necessarily collaborative and smooth collaboration is paramount to successful projects. As a responsible vendor we work hard to make sure users of our software can work a little easier when collaborating on large projects. Hence our DWG support, it is a part of the world we serve. 95% of the worldÝs infrastructure is designed, built and maintained using DWG and DGN file formats. Large users have a need to work directly with both file formats. That is what we deliver with MicroStation, an ability to work directly with both file formats.¯ 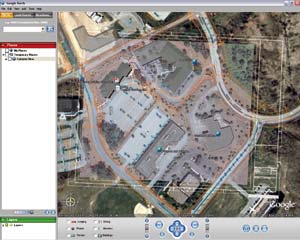 BentleyÝs model includes a subscription element called SELECT. Throughout the year, Bentley release updates and new functionality to MicroStation. This year the company added support for Google Earth in one of its SELECT updates, allowing MicroStation customers to output their designs and place them in a Google Earth environment. Cool stuff. 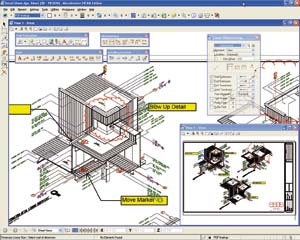 The ability to redline and mark-up models is especially useful in collaborative workflows. 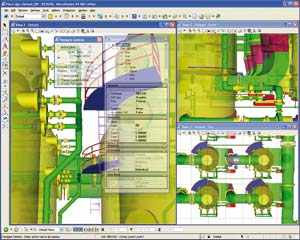 The powerful upgraded graphics pipeline in full flow, demonstrating the real-time transparency capabilities while in a process plant model 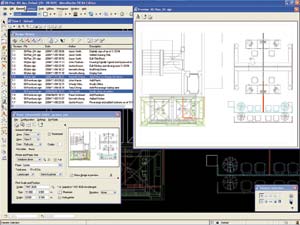 Roll backwards or forwards through milestone changes within a DGN file. ItÝs not unlike a time machine, showing the status of the file throughout its design life.

In the past, the problem of converting MicroStation elements into DWG and vice versa always produced a compromise as MicroStation and AutoCAD elements were just different and it was always impossible to define and save elements as DWG, or DGN had no way of correctly expressing them. The following year, after V8 had been released, at the Bentley User conference, the Bentley brothersÝ Q&A session with customers didnÝt include one question about DWG or problems about working within a DWG workflow, a topic which had always been raised. The decision to build in entities that were DWG compatible, together with extended MicroStation features, allowed users to work in a DWG compatible mode or in the superset, without the need for translation – but this came at the cost of a file format change ± the first for over a decade. V8 was probably the first bilingual CAD system.

In 2004, Bentley launched MicroStation V8 2004 Edition and this release developed on what was delivered in the first V8 version, launched in 2001. The print core was enhanced and Bentley was the first CAD company to really embrace PDF within it as a key deliverable publishing format. Bentley overhauled Digital Signatures, added revision control and ÙhistoryÝ based on ProjectBank, a technology added in the first version of V8. A cool XML-based Standards Management tool was included, support for Visual Basic and the dimensioning engine got overhauled to let users create labels that calculate and display linear, angular and radial measurements while checking for broken dimensions, as well as an automatic conversion between Imperial and Metric. References could also be nested, providing interoperability with XREFs in DWG and supported multiple sheet definitions. At the high-end surfacing, solids, meshing and new rendering options, such as particle trace, were added, together with parametric cells.

While V8 2004 Edition was being launched at Bentley annual BE event, Bentley was holding private sessions showing the work that was being done on the new interface and graphics pipeline that was very much in development, although I remember seeing a complete Harley Davidson motorbike modelled in the Ùnext releaseÝ, codenamed Mozart (which was to become XM). Under this guise, MicroStation had more in common with some of the MCAD tools I was familiar with – Dassault Systemes, SolidWorks and AutodeskÝs Inventor. It looked very slick. And this just about brings us up to date.

XM had quite an extended beta, taking a considerable gestation period to make it to birth. Changing something as fundamental as the graphics pipeline is probably just as complicated as the original work in the database that went into V8Ýs AutoCAD entity support. Changing Graphical User Interface (GUIs) is also always a contentious issue for customers who have trained and used a product for years. But MicroStation had to change. It was very much out of step with contemporary CAD programs and while Bentley has many large 3D users, the interface was decidedly 1980s.

MicroStation XM is no longer Open GL-based but relies on MicrosoftÝs Direct X technology, which has been mainly used in the gaming industry. Workstations running XM will probably need to at least have their graphics card drivers updated and Bentley provides a useful utility called ÙBentley Desktop AnalyserÝ to help diagnose any shortcomings in your hardware.

There are two interfaces on offer: classic, for those that want familiarity of previous releases and thereÝs the new one which is more of a contemporary Windows XP look and feel. When used in conjunction with new keyboard shortcuts and mouse button mappings, Bentley Systems is quoting productivity improvements of up to 300% – 400% over the previous interface. The Keyboard Position Assignments are a patented feature that provides immediate access to any MicroStation command at the stroke of a key and programmable mouse functionality to increase the performance of view and model navigation.

The new GUI looks a lot less cluttered and very clean. I guess the problem will be a cultural one – of getting users, set in their ways, to warm to a new interface. While initially an inhibitor, the promise of much greater productivity may get MicroStation users on-side.

Once set up, while the ÙclassicÝ interface obeys enough standard MicroStation conventions, you get vastly improved real-time 3D performance with the benefits of modern live rendering effects like 3D translucency; the rendering quality is really very high quality. And of course if you work in 3D, you can save your models and animations inside the enhanced PDF format.

" When looking at V8 in the context of the whole re-architecting project, itÝs a pretty amazing software engineering feat to have so thoroughly reworked a product to expand and modernise, while maintaining links back to past releases. "

A new management concept called Element Templates can integrate your CAD standards with MicroStation Tasks to align features and tools with design and production workflows, so that teams can create consistent work by using approved methodology.

Outside of XM, at least thatÝs how it will be used, Bentley has teamed up with Microsoft to offer, something it calls, ProjectWise StartPoint. This is a ÙfreeÝ version of ProjectWise that is based on MicrosoftÝs Sharepoint database which is free for many users with corporate server licenses with Microsoft. This provides an entry-level collaboration tool to manage, find, and share CAD data, built right into the product. This could be used to manage DWG data just as easily as DGN.

With Autodesk changing the DWG file format in AutoCAD 2007, V8 XM was updated to support features added to 2006 DWG. Bentley is understood to be working on the 2007 DWG format with the Open Design Alliance. ItÝs also of note that for the first time in living memory Autodesk is about to retrofit MicroStation V8 DGN capabilities (2D only) to AutoCAD. This is either in recognition that Bentley customers are Autodesk customers, or itÝs an aggressive move to get into some of BentleyÝs accounts, as Autodesk has its eyes on the civils market.

One of the other innovative new things in V8 XM are the Link Sets. Here, a bit like custom hyperlinks, ad hoc relationships between content can be described and navigated. So itÝs possible to create relationships and links between drawings and specification documents and across formats including DGN, DWG, PDF, and Office formats.

ThereÝs a load of new features in MicroStation V8 XM and the graphics capabilities have certainly received a big shot in the arm. The new interface was desperately needed and has brought MicroStation into the 21st Century. When looking at V8 in the context of the whole re-architecting project, itÝs a pretty amazing software engineering feat to have so thoroughly reworked a product to expand and modernise, while maintaining links back to past releases. From talking to Keith Bentley while the project was in development there was concern that the company was trying to do too much in too short a space. Maybe five years plus wasnÝt the kind of timeline originally envisaged but it has provided Bentley with plenty of time to work on new innovations and keep with the leaders in the 3D field. MicroStation is a better product for the work and a platform which the company can continue to develop its very specialised vertical 3D applications on.

The decision to rework the DGN format once in about 15 years, to include native DWG concepts and force a format change on customers was not taken lightly, and Bentley is quick to point out the suffering that some of its competitors hand out to customers with file format changes every 2-3 years. Even though so many new things have been added to MicroStation in this multi-year revamp, the DGN format hasnÝt changed, leading me to think that most of the functionality was already mapped out and catered for in the original V8 format.

With MicroStation now having so much in common with the mid-range MCAD products, I wonder if thereÝs any appetite to get back into the MCAD market, with a successor to MicroStation Modeler? Many of the demo models presented by Bentley appear to be engines and motorbikes. ItÝs hard to tell if this is the simply the interest of the demo jocks or just a potential use of the highly 3D capable application?

We have a substantial interview with Joe Croser, BentleyÝs Global Marketing Director for Platform products in the next issue, looking at the specifics of the changes to MicroStationÝs 3D graphics.