HP has become the first major workstation manufacturer to offer the Intel Core X processor in a desktop workstation. Previously, the consumer-focused CPU, renowned for delivering a large number of cores at high clock speeds, was only available from specialist manufacturers like Scan and BOXX.

Intel Core X CPUs, which include the Core i7 X and Core i9 X, will be available in a special version of the HP Z4 Workstation, which launched last year. HP will continue to offer the original HP Z4 Workstation with Intel Xeon W-Series CPUs.

The main reason behind this move is to bring down costs and tap into the price sensitive, creative sector, where designers typically need lots of CPU cores for processor intensive operations like rendering.

There are some architectural benefits to the Xeon W Series, such as support for ECC memory, but this is not deemed critical by most digital artists. The Intel Xeon W Series version of the HP Z4 can also support up to 256GB memory compared to 128GB on the Intel Core X model.

In addition to the cost of the processor, the Intel Core X version of the HP Z4 should offer additional savings as it only has one 1 GbE port and one M.2 SSD slot, instead of the two on the Xeon version.

HP anticipates that its traditional workstation customers, including architects and engineers, will continue to depend on Xeon, while the Intel Core X should appeal to creatives whose workflows include design viz, rendering or VR development. However, both machines will come with the same ISV certifications so will be qualified to run all different types of professional 3D applications.

The HP Z4 with Intel Core X processors will be available in mid-March. Pricing has not been announced. 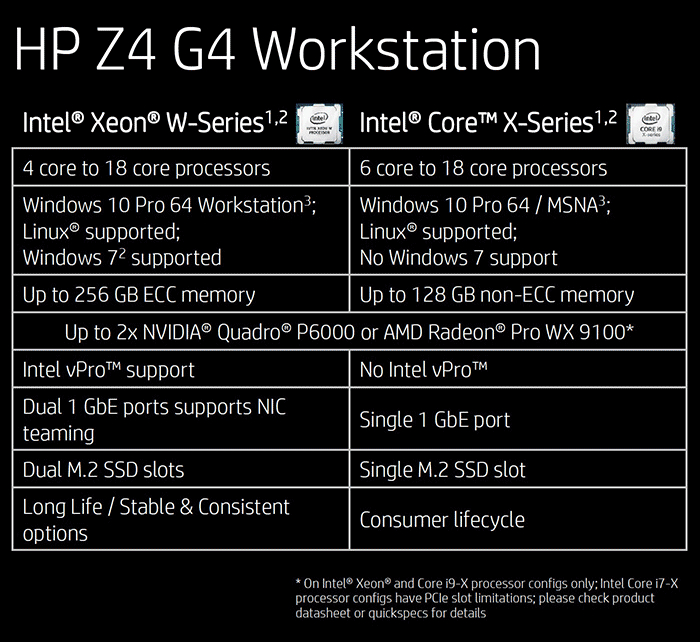