Tekla Structures has always been about the creation of models to a fabrication level of detail but now engineers, fabricators and contractors are being given access to more powerful tools to exploit the data within the Building Information Model.

It is all well and good producing BIM models down to a fabrication level of detail, but without the tools to properly exploit the rich data held in the model you are missing a trick.

This is one of the key issues addressed in Tekla Structures 20, the latest release of the Trimble-owned structural Building Information Modelling (BIM) software for engineering, fabrication and construction.

The headline feature of the new release is the Organizer — an enhanced management tool that acts as a hub for model information.

Rather than treating the model as a whole, Organizer makes it very easy to generate quantity take-off reports for specific objects in specific locations within a building. One area this could prove very useful is in procurement as buildings move into different phases of construction.

The first stage is to break down buildings into logical zones — e.g. buildings, sections (concrete frame, roof structures) and floors. Any new or existing objects that fall within these sections automatically become part of that zone. With Model Organizer, the tool that Organizer replaces, beams, columns, slabs, plates, walls etc. had to be assigned to each zone manually.

Setting up the model in this way gives a lot of flexibility when extracting model information for quantity take-off. For example, if you want to find out how much concrete is needed for the columns on the first floor, you can do so with the click of a button. Custom categories can also be created for things like rebar.

Quantity information can be viewed and reported inside the Object Browser, which presents everything in an easy to understand spreadsheet. There is full flexibility here, and users can order information or generate more complex reports based on unions and intersections of zones and categories. Reports can also be exported in Excel format for further work in other applications.

It is possible to report on pretty much anything within the model that has a property and to use equations to extract more detailed information. The system comes with a number of report templates including one that automatically generates the dimensions for concrete formwork.

To get the most out of the system, firms will not only need to develop best modelling practices to make sure information is consistent, but develop workflows that harness the data in the most efficient way. But with a little bit of investment up front it looks to be a very powerful addition to Tekla Structures.

Organizer is based on the very latest Windows UI standards and looks and feels quite different from the rest of the product. We expect this is a sign of things to come as the rest of Tekla Structures transitions to a more modern UI.

Tekla has done a lot of work over the years to improve interoperability with IFC (Industry Foundation Classes) data including files from Revit and ArchiCAD. IFCs can be used as a reference file but in order to get the most out of the data they need to be converted into native Tekla Structures objects.

The software has always done a decent job of handling the conversion of standard steel members but it is now better at dealing with more complex forms including things like cuts, curves, and spirals as well as complex architectural B-rep objects.

From a workflow perspective, re-using data saves time but models do not have to be converted en masse. As drawings are still the dominant contract document, data is often shared on a more informal basis so the software allows individual members or areas to be checked first and converted in batches.

Direct manipulation tools that offer SketchUp-like push/pull editing functionality used to be available as an Extension (a downloadable plug-in from the Tekla Extranet) but have now made it into Tekla Structures proper.

Users can pull faces around and change the size and location of objects by clicking on handles. It is great when working with reference files, as users can quickly model concrete or steel objects then pull and snap them into position. Grid lines can also be edited in the same way.

Direct manipulation allows you to dial in absolute dimensions very easily and in many cases bypasses the need for time-consuming dialog box input.

It also works particularly well when creating, editing and changing the size of holes in slabs and for modifying reinforcement. Previously, to adjust the position of a reinforcement bar, you had to punch a distance into a dialog box. With direct manipulation you just grab it and move it where you want. This makes it much easier to deliver a fully accurate 3D detailed model, hopefully leading to fewer issues or queries on site when dealing with complex reinforcement.

Direct manipulation is more useful at some stages than others, and can be distracting to users, so it is possible to toggle on and off by hitting CTRL/D.

New tool for flooring There is a new ‘floor layout’ plug-in that allows engineers, pre-cast fabricators and hollow core manufacturers to quickly create multi-layer floors and extract volumes and weights. 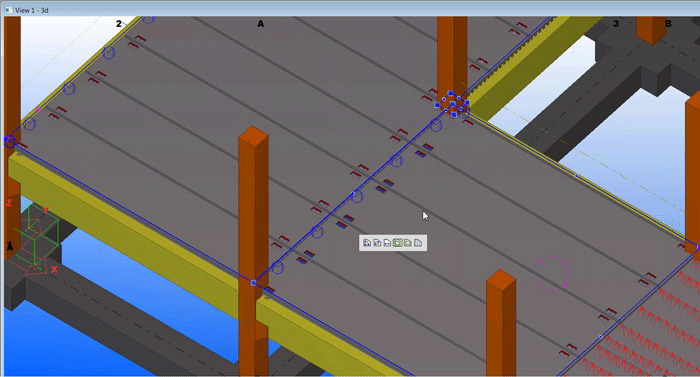 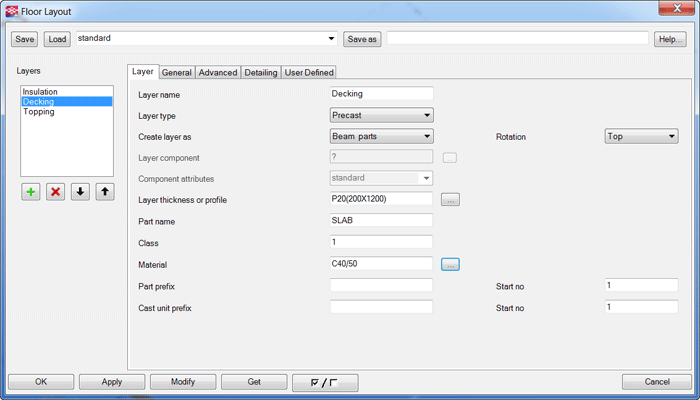 Sketch a floor layout and then define layer type (precast, cast in place, or insulation), thickness, material and class all from a single dialogue box. It is easy to add openings and break lines so you can very quickly take a whole floor and break it up on the support beam lines. It can also put in the end connection components, including rebated ends, notched ends and lifters.

Weld preparation has been enhanced to automatically bevel the parts to be welded and physically show them in the model instead of just displaying a note. Previously, if you wanted to see the weld preparation or get the weights correct, you would have had to do a manual polygon cut on each member. This should be particularly useful in offshore, bridges or where heavy plate work has several layers of welds.

This is a new feature for importing, exporting, and viewing custom 3D shapes. Users can model complex shapes using a third party modelling tool and import the models into Tekla Structures. Previously shapes needed to be modelled inside Tekla Structures.

The software supports SKP (SketchUp), DGN (Bentley Systems MicroStation), DXF, DWG, and IFC, plus IGES and STEP, which can be exported from all major mechanical engineering software tools, including SolidWorks and Inventor. 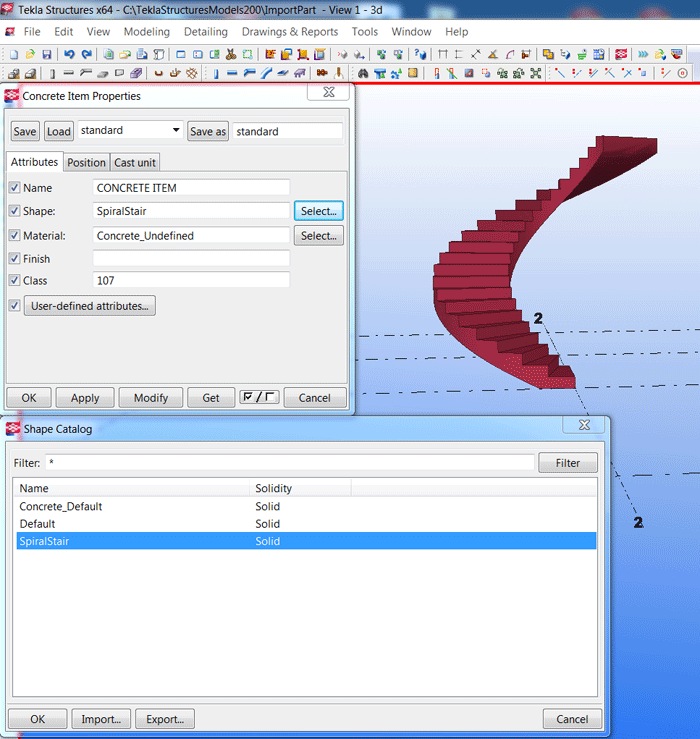 With the new Shape Catalogue, users can model complex shapes in a third party modelling tool and import the models into Tekla Structures

Naturally, Tekla wants component manufacturers to come on board with this and, with many manufacturers already having their components in applications like SketchUp or SolidWorks, it should now be a whole lot easier.

Objects are not parametric but can be complex B-rep models. Once inside Tekla Structures they can be assigned class, materials and other attributes, such as weight, an order code or a link to a website. 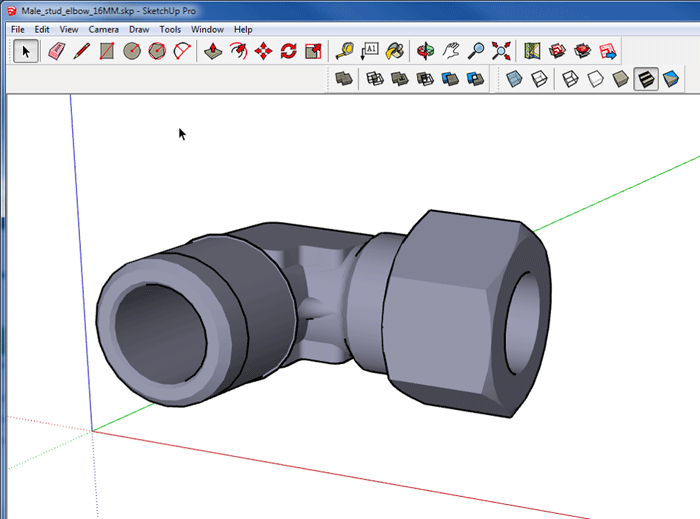 Indeed, a number of firms already offer SketchUp models in Trimble 3D Warehouse (3dwarehouse.sketchup.com) so we expect there to be tighter integration to this online resource in the future.

Part Add isn’t a new tool per se (it used to be hidden inside detailing) but it now has its own button. It essentially makes it easier to create a single object from geometry that might be easier to model in multiple parts.

Rather than having to fiddle around with trimming edges, the software automatically combines shapes and cuts out the bits that are not needed. Examples where this might be useful include architectural panels, odd shaped footings or complex plates.

You may have spent some time adding text or associative notes to a drawing but then need to create the exact same drawing for a different purpose e.g. for preparing formwork instead of fabrication. Previously you would have had to create two separate drawings, but you can now clone the drawing and just change the information.

A new ‘Print Drawings to PDF’ tool features a preview so you can see what drawings will look like before you print them. It is not embedded in Tekla Structures 20 itself, but is available as an ‘experimental’ extension to download from the Tekla Structures extranet site.

Another enhancement means it is now possible to now print reports direct to PDF, using a built in PDF engine. Version 19 showed its age a little, only being able to create reports in text or HTML format.

This is not a new feature, but is now available in all versions. Previously it was only available with a ‘full’ or ‘contractor’ licence so reached a limited audience.

Task Manager was primarily designed to help plan construction sequencing, as an alternative to Navisworks. However, Tekla is hoping to broaden its reach into areas such as fabrication planning.

Clash check has been enhanced specifically for reinforced concrete, taking into account reinforcing bar clearance and bar cover thickness. But perhaps most importantly, clashes are now highlighted with a magenta box making it much easier to see where they appear in the model, much like they do in Tekla BIMsight.

While this is particularly useful for rebar, which can get incredibly complex, it is beneficial for all types of clashes.

This is another extension that can be downloaded from the Tekla Extranet. It offers a streamlined workflow between Tekla Structures and Tekla BIMsight, making it easier to feed back markups from the site to the design office.

Simply point both applications to a designated Dropbox folder and any comments/notes added to the model can be automatically synced in both applications. Comment files are very small so it is quite feasible to do this on a low bandwidth connection, providing models are synced beforehand.

Tekla has added a solid set of features to the latest release of Tekla Structures with a good balance of new and enhanced modelling and management tools.

The overriding theme is of data, with the company helping users make best use of data upstream (through tighter links to architectural BIM and manufacturing tools) and downstream by delivering finely tuned model data with the new Organizer.

When you consider that parent company Trimble has access to such a wide range of technologies, including structural design /analysis, 4D scheduling, 5D estimating, cost control and FM, we can only see this theme growing as Trimble looks to maximise the flow of BIM data between its various applications.