BIM is great for co-ordinated documentation and visualisation, but having a 3D model is also useful for establishing if a design meets building regs and is fit for purpose. Xinaps has a cloud-based tool for doing just that. Martyn Day reports

Based in Holland, Xinaps has been developing quality and rule checking applications for BIM models for almost three years. These have been commercial tools for the general public, as well as bespoke applications for large players such as Philips. As its business model and technology offering has evolved, the latest version of Verifi3D is almost ready for release, using a brand-new cloud platform to address some key design issues: disabled access, doors and gate clashes, stair head clearances, fire alarm egress paths, fire hose access, and water sprinkler coverage. Everything is done through a web browser. 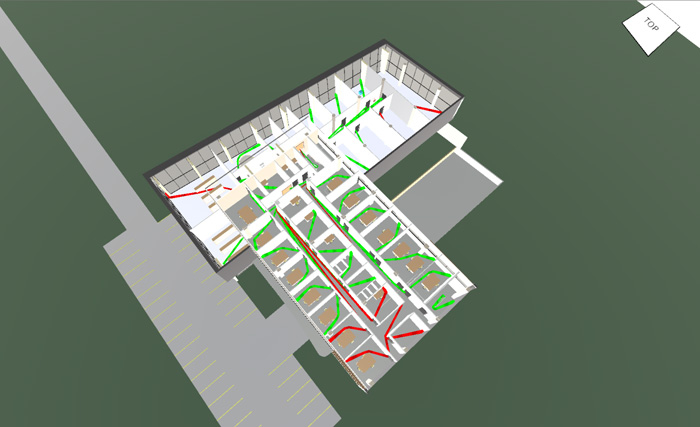 The workflow is pretty straightforward: models are either uploaded or accessed from cloud repositories such as Autodesk BIM 360, and seamlessly brought into the Verifi3D environment which is powered by Unity’s game engine. The net result is that Verifi3D is a lovely and fast viewer once it has rebuilt the BIM models. The user interface is clear and there are keyboard shortcuts to move about, slice and dice the model quickly.

Unknowingly, by deploying Unity as the viewing technology, Xinaps has picked the VR developer that Autodesk has just chosen to work the closest with, so in the future we expect to see Verifi3D benefit from faster translation and more meta data like textures – not that this is particularly important for the analysis component. 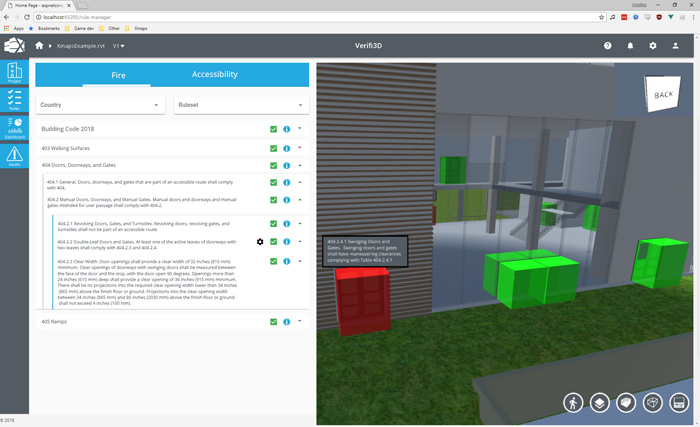 Running the analysis routines is also very visual and easy. Verifi3D organises tests by project and data location. These can be reloaded when required and are quick, so long as the model has not been changed. If there are changes then the model needs to be reloaded. 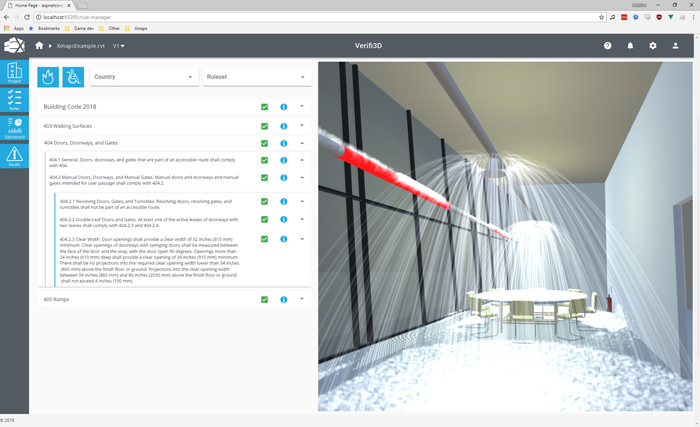 The general rule of thumb is Red is bad, Green is good. The system also provides full report generation, filtering and quick ways to find the areas of failure. In some calculations, it will also give text explaining how the design infringes the code. The checking system is volume-based and requires that the model is, of course, accurate! 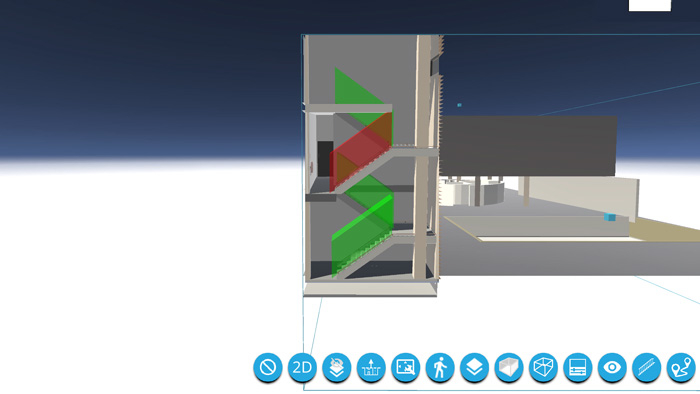 As standards are different all around the world, Verifi3D also includes its own tool for the creation of these. No scripting or coding is required; it’s very visual and checkbox driven. As things stand, European and American standards are included for the areas Verifi3D currently checks. These can be accessed within the application, showing if the design has passed or failed. Each of the building codes are listed.

Egress: The speed of evacuating a building is important in many unforeseen circumstances. Verifi3D gives a very visual result, showing the paths from each of the rooms in a building. Should the path take too long or not be close enough to an escape door, these will be flagged in red. It’s possible to isolate any of the paths and the software will automatically section the model to show the escape route, even over multiple levels.

Fire: While egress is a component of fire evacuation, Xinaps has addressed the issues of sprinklers and fire hose reach. The sprinkler test is the most fun to watch, as it actually ray traces water and bounce interaction with walls and furniture, clearly showing covered and uncovered areas of a design. Each room receives a percentage covered figure, indicating if it has passed or failed.

Hose and sprinkler coverage can be seen on plan views with areas that have passed or failed. This is all recorded in the reports.

Disabled access: These tests cover a range of wheel chair manoeuvrability access issues, such as toilets and access to floors and exits. Design issues are again quickly highlighted and it’s possible to move about the model quickly, identifying areas which have failed the tests.

Others: Door clashes and stair head height have also been included, indicating where doors have been designed to open out into each other’s arcs or stairs that fail to meet building codes. The list could be endless of all the case conditions for which customers would want to track and they can easily create their own suites of tools for special situations. 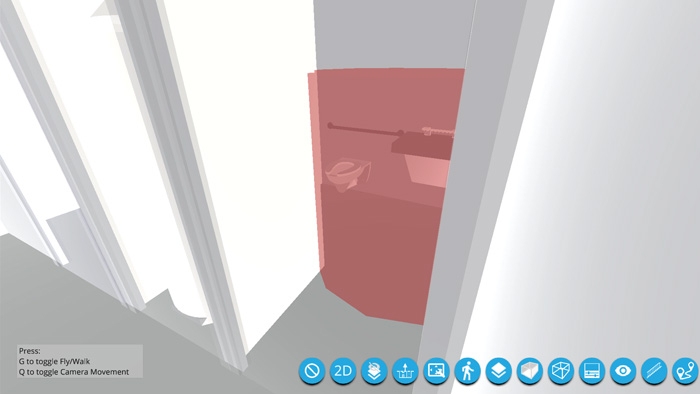 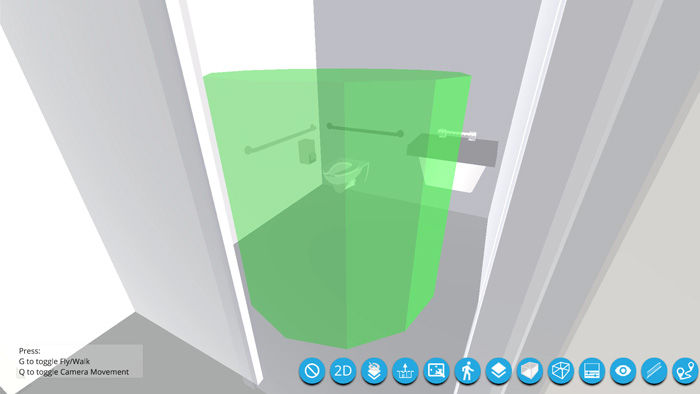 Verifi3D is pretty fast. In most cases, doing a whole building took about a second or two. For ease of identifying the results, while all tests could be run at once, it’s better to do each in turn and get grouped results, than fill the whole model with red and green areas covering multiple test results.

Unlike many other applications we have seen, Verifi3D has evolved over the last three years and it’s been an interesting experience to see how developers have to cope with the moving targets of API development, technology, user feedback and big customer’s requests. It’s a tribute to Xinaps that the product has kept developing and held its focus on offering really easy to use quality checking for BIM models. Now it resides in the cloud, it gets the benefit of omnipresence for collaborative model and performance sharing, without the need for expensive model checking software of BIM seat licences.

Pricing is still being worked on but there will be a basic monthly fee, with a charge for storage, and discounts for company-wide subscriptions. The software is currently in beta and we expect to hear final pricing in the new year.