Under the stewardship of chief executive officer, Carl Bass, Autodesk has accelerated its development of and experimentation with new design technologies. Some of this work has been done in-house, part by acquisition, but there have also been some strategic staff additions, one of which is Dr Robert Aish, former director of research at rival, Bentley Systems.

A Generative Components user describing how they have used programmatic solutions to produce sophisticated results.

Dr Aish had developed Generative Components (GC), a parametric modelling system which ran on top of Bentley MicroStation. The software was widely adopted by firms that were at the cutting edge of design modelling. GC provided a tool to enable very complex forms to be generated and manipulated using algorithms. Leading practices such as Foster + Partners, KPF and Arups were all experimenting with the system to create rules-based designs, which could be quickly re-calculated should the underlying geometry change. While still in extended beta, some buildings and bridges were designed and built using GC.

At the time AutodeskÆs approach to this need for free form design was to push 3ds Max or Maya but these were not similar parametric solutions. With AutodeskÆs aspirations to move up the food chain and provide tools to signature architects, it recognised that it had to have some new technology tailored to these very specific needs. The net result was Dr Aish leaving Bentley Systems to join Autodesk and to think through the solution from scratch. Dr Aish had the pick of AutodeskÆs vast toolkit of 3D technologies and oddly enough, ended up in the platform development group, working with good old AutoCAD. From this positioning, we can assume that Mr Dr AishÆs new code will serve as a platform-level technology, available to many industry groups.

Having had a little less than a year at the company, Dr AishÆs first Design Computational Symposium at Autodesk University in Las Vegas, was also his first public outing. With nine industry speakers and Carl Bass on hand, the presentations explored many different types of situations where the computer can take the processing load off the designer: allowing multiple solutions to be devised in minutes; using simple software to create projects of great complexity; enabling models to feed back structural and sustainability performance; allow the design of adaptive systems for buildings; rapidly optimise to best suit design intent; aid digital fabrication and using algorithms to integrate both architectural and urban design briefs, to computationally derive the best fit.

The events were very similar to Mr Dr AishÆs Architectural seminars traditionally held before BentleyÆs yearly gatherings. This was, perhaps, to be expected, with many familiar faces and projects at the event, although this time there was AutoCAD, Ecotect and Inventor. What was more significantly different was the audience, which were, by and large, from practices that were nowhere near investigating GC, let alone dabbling in 3D.

ItÆs from talking to these attendees that you can, in part, see why Dr Aish has joined Autodesk. With a company the size of Autodesk, and not forgetting its massive resource capability, here Dr AishÆs vision of æprogrammatic design for allÆ could be best popularised.

While the technology is still young, there was a brief demonstration of some new code running on AutoCAD. At the moment, Dr Aish calls it D Sharp (a play on MicrosoftÆs C Sharp language) and itÆs a totally brand new programming language that provides a relatively simply way of building relationships between standard AutoCAD geometry. 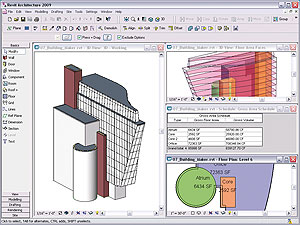 Dr Robert Aish had the pick of AutodeskÆs vast toolkit of 3D technologies and ended up in the platform development group, working with AutoCAD.

The demonstration showed a 3D tree-like support structure that would snap to the AutoCAD baseline grid but would deform the æroofÆ surface above it, wherever it was moved within the model. Unfortunately, photographs and videos were not allowed, so for now, I can only describe it. It would seem that æD SharpÆ may well extend beyond AutoCAD but for now, that is the target platform. As æD SharpÆ is essentially a language based on defining relationships and is not a geometry engine, it could eventually be applied to other Autodesk products, as parametric design is useful across a broad range of application areas.

Bentley Systems is obviously a tad concerned at what Dr Aish is developing at Autodesk. His loss certainly accelerated Bentley SystemÆs promotion and development of GC within the architectural community. However, looking at McNeel & AssociatesÆ exciting Grasshopper parametric technology for Rhino, itÆs obvious to see that this programmatic approach to design is really starting to gain momentum.

It is always exciting when there is a technology bun fight, an arms race if you will. With the best minds on all sides coming up with better, faster and cheaper ways to wow us with tools that ultimately let amazing forms be realised and built. All this technology means sophisticated results at the same cost for a boring rectangular building.