AEC MagazineÝs publisher, Martyn Day, managed to get some talk time with BentleyÝs Global Marketing Director, to get his opinion on BIM, IFCs and current vents in the industry.

There has been a radical change in the interface of MicroStation. How has this altered the building vertical products that are based on the new version?

Huw Roberts: These new versions of Bentley Building benefit dramatically from the new XM 3D interface. ThereÝs also a load of enhancements to the vertical products functionality and easy of use, as we use the task-based interface to great effect. So, there are some domain specific changes to the interface that are contextural in nature, they change with each discipline too. This simplifies and organises the design process for users.

If a company has a particular way they want to design in one for the disciplines, they can develop their own or modify the product to match their workflow or standards. With XM, the interaction with the software has been made much simpler, which is good. If you look at Bentley Architecture or Structural, or any of the Bentley verticals, in relation to AutodeskÝs Revit, Revit is easy to use and understand and navigate but kind of falls down when you go beyond its capabilities, which you do fairly quickly. The flip-side is that the MicroStation-based applications can pretty much create anything you can think of, but they are hard to get up and get started on. I think the new MicroStation interface, the new task based-design and heads-up technology, radically addresses that. ItÝs basically a whole new interface for our vertical products.

The second thing is that while our integration between all our applications is already pretty good, thatÝs improved again, with a lower entry point for document management. We have bought a number of analysis companies and are continuing to develop partnerships with other analysis products in all the disciplines and we have also increased our support for IFCs up to 2×3. 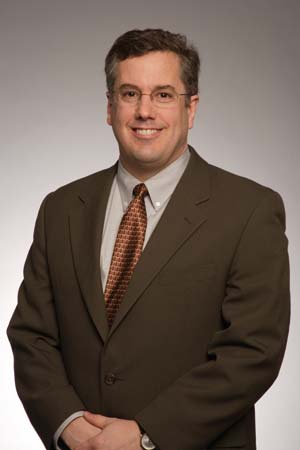 Autodesk has been talking a lot recently about IFC compliance in Revit and the decision of the General Services Adminsitation (GSA) to require submittals in IFC format. WhatÝs your take on Interoperability?

HR: The differences in approach to IFCs really reflects the differences between the companies. Interoperability is basically the ability to take information from software, one datasource, one person, one activity to give to someone else in a way that they can use it for their own purposes and maybe bring it back. So, itÝs an exchange based approach. You should be able to do that in a predictable and managed way. Now thatÝs good and has been very important to Bentley for a long time, but donÝt mix with that the concept of integration as integration is better than interoperability, because ÙinteroperableÝ is only a snapshot of your data from your native environment and giving it to someone else as a reflection at some point in time as to where you were. All those exchanges have to be managed and synchronised and, whichever way you do it, you are working in a disconnected way.

In an integrated workflow you can act on and work with the information as it appears. In the Bentley BIM applications, if you are an architect working with a structural engineer and a building services engineer, obviously you are all using Bentley applications to do that and working on your own data but all that information is shared, viewable and editable (within reason) by anybody on the team using those applications. You can actually fire up Bentley Architectural, Structural, Mechanical, Electrical all at the same time, within one session of MicroStation or use reference files and all the data and information is accessible. They all speak the same language. The support for IFCs that Revit has, is really only a small part of the definition. The General Services Administration (GSA) here in the US (a government body) required that preliminary designs came with an IFC model and that was really just spaces and a few other elements, itÝs not a very robust model definition at all. What Autodesk has done is included an export, and only an export, and include only that definition. Autodesk has no IFC for structural, mechanical or details of architectural design and they donÝt have IFC import. We offer the full definition of IFCs in all of our building disciplines.

The IFC as a technology means of interoperation is now getting pretty good for exchanging information and there are lot of downstream analysis tools that can use the IFCs now, so itÝs become a really well adopted technology and thatÝs really good for the industry, no one software vendor can dominate. The latest release has really taken it to another level. And the IAI has gotten really smart about promoting it to the architects and their whole Ùbuilding smartÝ campaign has taken their message, made it less technocratic and more understandable.

I was quite amazed to see the demonstration of Autodesk Revit Structural running as a separate database to the Architectural Revit model. I thought the whole idea about BIM was about a single database?

HR: I actually think itÝs hilarious. Autodesk talks out of both sides of its mouth. On one side they say, the only way to do BIM is to have a single database. RevitÝs whole concept is that you all have to be in one database and the only effective way to access that database is through that tool. So, you canÝt deal with a Revit Building model and have it aggregate information from various sources, like AutoCAD, MicroStation and SAP and Excel. Yet at the same time, if you are talking about another discipline, like mechanical, thereÝs a separate database and you canÝt put the two together anyway. I think they are finding that the federated model is the only way to go – a distributed team using different tools, running different information sources. ThereÝs a whole lot of information thatÝs needed in buildings that has nothing to do with CAD.

So whatÝs happened to the Single Building Model concept?

HR: I think the industry is a victim of old marketing. The notion of a single building model is because people want a place to go where everything is correct and up to date; everyone who needs to get to it can get to it. How thatÝs technically managed, whether that be one file, or a number of federated files, isnÝt really what people care about, itÝs the result. I think in order to achieve that, the ÙSBMÝ or whatever you want to call it, it has to be a federation of databases, files, sources and connections to support the nature of the industry.

In our Bentley architecture you can do everything in one file if you want to ± thatÝs a single building model, and it can get huge. ThatÝs the approach Revit takes. What happens if you are in different cities? What if you use different tools? It has to be federated and you can do that with our integrated tools.

Autodesk is quoting some serious numbers for Revit sales, upwards of 140,000 seats?

HR: You have seen that game before, the Revit Series, is a bundle of AutoCAD and Revit. I think thatÝs what that is. They are including educational in there too. We could do the same thing but throwing in all our seats but thatÝs not a useful fact, itÝs not realistic in the market. There are firms that have been doing BIM very consistently and proving the technology, like BDP and Whitby Bird in the UK and the rest of the market is doing it at a slower place. Almost everyone is looking or investigating BIM. There is virtually no demand that doesnÝt at least have a pathway or roadmap to BIM. A lot of companies are realising that a move to BIM is a change, itÝs all about the discipline specific capabilities.

Everything that we can see is a neck and neck race in BIM, between Bentley and Revit. We have some AutoCAD users coming over when they go to BIM and in fairness we have some mixed shops that are trying Revit too. But we have Revit customers coming to us after they used it, and they didnÝt like it so came over to our side of the house. There is a horse race in BIM and it is us two. Graphisoft seems to be looking at the construction space, their worldwide marketshare is less than 2% now, but the CEO there, Dominic Gallello is doing a good job, heÝs turned them around and is finding new outlets for the company.

We have a lot of online resources and we are pursuing events and activities where we can tell the story and thatÝs working. Our BIM applications are accelerating and itÝs getting out there to the AutoCAD base.

Bentley has purchased a number of solvers and analysis packages for structural design over the years. AutodeskÝs recently purchased its first, a French analysis company called Robobat. WhatÝs your opinion on this?

HR: The notion of using BIM and tying it into analysis is one of the great payoffs of the approach. I think itÝs interesting because Robobat is a French company that is well adopted in France and Poland, a little bit in South East Asia and South America, but almost not on the map in North America. ItÝs fairly high-end analysis for purists, itÝs more like STAAD, it can handle the complex stuff well but not a great match for your typical structural engineer, doing concrete masonry and steel.

ItÝs interesting that Autodesk bought them. We are guessing Autodesk will probably fold this into Revit Structure and itÝs clear they were having trouble with the links between the program and the analysis applications. If you look at how the links work, Revit Structure doesnÝt have sloping columns, sloping beams, connection types, so the analysis programs donÝt know what to do but thereÝs nowhere there to put it. I think both sides were having a lot of frustration, so Autodesk wanted to bring some of it in-house.

I know Autodesk makes the pitch that structural engineers use lots of different applications and Revit Structure is a common interface but I think thatÝs off track. Structural engineers in general, ÙdonÝt do CADÝ. There are engineers that do analysis and design and then thereÝs production teams that do the documents or model work. Engineers use STAAD etc and they are thinking about totally different things.

Revit structural is clearly oriented at making a drawing. They are tying to get into the Structural engineers through the documentation space, we are going through the tools that the actual engineers use and connect those to whatever is required, thatÝs more of a reflection of what engineers want and how they work today.

AEC Magazine is a bit of a fan of BentleyÝs Generative Components (GC). How could GC technology impact BIM?

HR: The connection of GC to the rest of our vertical programs is really strong, thanks to the underlying architecture of the XM version. GC is now closely integrated with BIM applications, so the model being manipulated by GC could be a Bentley Structural model or a Bentley Architecture model, not just ÙdumbÝ geometry. So you could have a GC design that is changing the curve of building and heights of floors and is also driving the steel frame. This could be linked to analysis programs so you know what impact your changes had on any of the disciplines. You could have the rules of GC linked to a discipline specific rule, other than just geometry. Some of those constraints might be structural properties of the material or size of glass panels you can buy, so with BIM, that takes you beyond form finding to making real construction decisions by using GCs. ThereÝs already a generation of users out there using it on real live projects.