Parametric design can offer many benefits to structural engineers, from the automation of repetitive tasks and easier handling of last-minute design changes to the opportunities it provides for the creation of the geometrically complex, explains Trimble’s Stuart Campbell.

Parametric design, or data-driven design, is perhaps more com monly associated with the architectural discipline. – However, while architects have been open to and familiar with parametric design for many years, this is not to say that engineers are completely new to the idea. Whereas architects have made use of parametric modelling to achieve geometric complexity in their designs, an engineer can perhaps achieve far wider and greater benefits with this parametric or data driven approach – benefitting not only their business and its processes but also their service to clients.

Rather than architects being the dominant leader in parametric design and modelling, therefore, it would be perhaps more accurate to say that, while both disciplines are familiar with the approach, it is engineers who are increasingly starting to explore and further develop the value that such a data-driven and parametric way of working can deliver. Nor is parametric design only reserved for the major, signature construction projects; instead, it is becoming widely accessible across the engineering sector, used on the everyday developments as well as the extraordinary.

While every construction project is different, and no two buildings are the same, the processes involved, particularly from a structural engineering perspective, are often identical; therefore, lending themselves well to automated processes.

To demonstrate, any building, regardless of its function, will often be repetitive in its design, featuring any great number of identical steel components, such as beams, columns or plates.

From a modelling perspective, each of these identical components would have to be added into the model separately, which is not only hugely repetitive, but would also take a considerable length of time. However, practically speaking, if manual and repetitive tasks and calculations could be automated, the amount of time and resources able to be invested more efficiently elsewhere on a project would be significant.

While existing CAD tools, such as Tekla Structures, may already have some element of parametric and automated capabilities, parametric design can take this functionality to the next level.

Consider a series of steel columns, each identical in form and required to be a set distance apart from each other. With a parametric design tool, such as Grasshopper, you would simply be able to input the required parameters – including the x-axis value – and multiple, identical columns would be automatically generated as an output in the corresponding model, spaced out in accordance with the written script. However, the value of automation is perhaps most keenly felt during the structural analysis. As engineers, a large majority of time will be spent reviewing analysis data, whether to verify that the building meets a dictated set of structural requirements or to determine the set of variables that provides the optimum structural design. Indeed, with clients becoming more demanding by desiring the most efficient building design in terms of mass material cost and carbon footprint, engineers are under increasing pressures to satisfy these requirements. With a manual workflow, determining the most efficient design is ordinarily an incredibly time-consuming process, involving the engineering team having to manually change each variable, run an analysis, note the results and then repeat an indefinite amount of times. Whereas, by incorporating parametric design into your workflow, this process is transformed.

For example, on a recent project, the engineering team used the Grasshopper and Rhino live-link with Tekla Structural Designer to analyse deflection in a proposed truss system. Through the Grasshopper script, the team were able to run various design iterations at speed. The software then listed the deflection results for each and automatically highlighted the set of variables that resulted in the most efficient design – in this case, the optimum balance between minimum steel weight and minimum deflection. 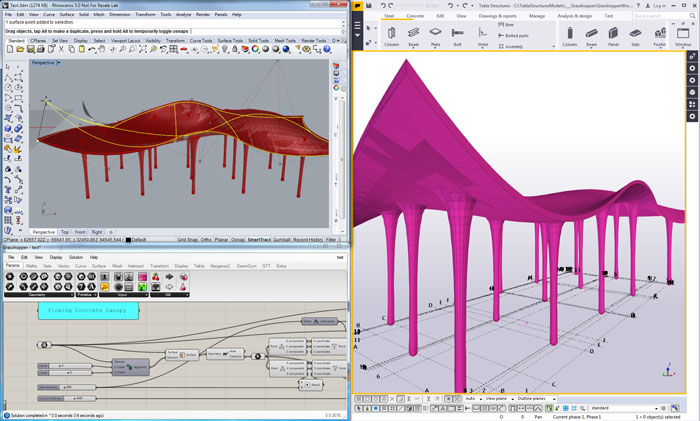 A significant time-saver, parametric and computational design signals a shift from manual and repetitive work to more creative engineering. Even using a single automated mathematical function in the place of a repetitive task would have a notable result, enabling you to spend more time on providing the client with added value services on the project.

This idea of creative engineering is another exciting benefit of parametric design. Just as the time and resources saved, as a result of automation, can be used on improving a building’s cost or carbon efficiency, the same time and resources can also be invested in creating a more geometrically complex and aesthetic form from the start. Used correctly, parametric modelling can be a means of allowing computer software to drive geometry creation for structurally complex steelframed buildings, ones that would have been incredibly challenging – if not impossible – to model and analyse manually.

As well as allowing engineers more time to be creative and push the boundaries of structural design, parametric design also enables otherwise challenging structures, such as complex building facades, to be modelled at a far faster rate.

Santiago International Airport in Chile is but one example. Manually designing the soffits and new, curvilinear roofing system for the first terminal building, took the engineering team six months to complete in Tekla Structures. For the second terminal building, the Grasshopper live link was used in conjunction with Rhino and Tekla Structures and the soffits and roofing system were modelled in just one week – a huge time saving 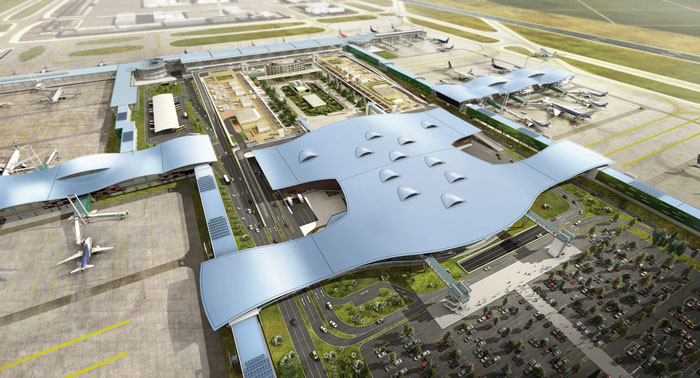 Civil engineering, such as the construction of road and rail bridges and tunnels, is another area where parametric design is particularly beneficial, often being challenging and structurally complex in nature.

When designing the Paris Metro line 11 extension, due to the track variability and the tight tolerances involved, it was clear that a manual insertion of all elements would be a time-consuming process. As such, a bespoke Grasshopper file was developed, by using the live-link between Tekla Structures and Grasshopper, in order to automatically place the elements, so that they were correctly aligned with respect to the rail track. The Grasshopper file included a coordinate transformation, which allowed the structural elements in Tekla to be close to the origin of the model, as well as give the georeferenced coordinate of each element modelled. By doing this, it enabled close cooperation between the BIM modeller and the surveyor, who was responsible for tracking the installation points of the elements.

A common challenge on any construction project, last-minute design changes can be incredibly time-consuming for structural engineers to resolve; as well as involving a high degree of repetition, particularly on the more complex BIM models. As the very name implies, such requests will commonly occur towards the end of the design stage, where the model, drawings and schedules are almost complete and contain a high amount of information-rich data. As such, while the change may initially be to just one structural component, the likelihood is that there will be a significant knock-on effect on all of the connected components, making resolving the change and ensuring that the updated model is still constructible both a long and intricate process. With parametric design, the building or structure has already been modelled in a connected way. All parameters, inputs and outputs, are interconnected and the data relationships are maintained, meaning that if you have to change a single parameter, all the associated components automatically adjust in line with the new inputted data. 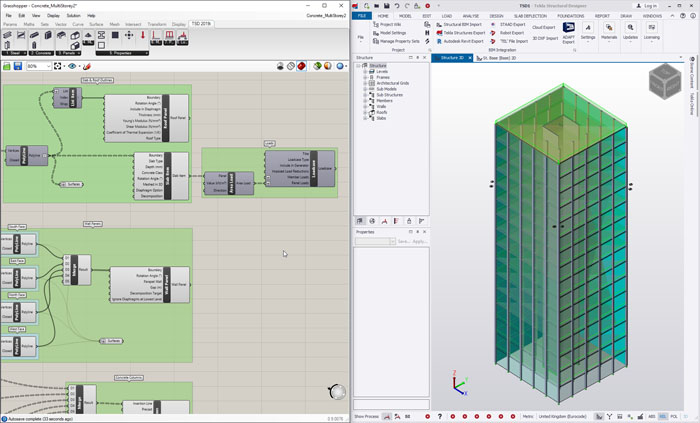 As aforementioned, in many ways, some 3D modelling software, such as Tekla Structures, already have inherent parametric capabilities, with this same idea of a continuous data transfer link at its core. For example, should you change something in a Tekla Structures model, the associated schedules and 2D drawings are also automatically updated. By incorporating a parametric tool, such as Grasshopper, into the workflow, you are essentially adding a new link at the start of this data chain, enabling data to be efficiently transferred and remain connected throughout the whole design process, from model through to drawings.

This idea of an integrated process is central to parametric design. Not just in terms of the integration within parametric design itself but also the position of parametric tools in the structural design process, with data being transferred from the computer script to the model and even on to the schedules and drawings. In fact, it perhaps even goes beyond this, enabling greater integration between disciplines in the context of the wider project and a more controlled flow of data through the project’s overall Digital Plan of Works.

Used by both architects and engineers, parametric modelling has the potential to be the driving force behind architectural and structural design, making digital processes more feasible and allowing design data to be better connected throughout a project. However, this ideal does not come without its challenges, for in order to maximise the greater levels of integration that collaborative parametric design can deliver, the same level of quality and accuracy of data is required throughout the construction process, from the architect through to the engineer and beyond.

It is clear that the benefits of parametric and data-driven design are significant, automating traditionally repetitive workflows and enabling engineers to instead focus more time and attention on delivering added value on a project, whether in terms of design optimisation or a structure’s geometric complexity. That said, it is important to note that such technological advancements cannot replace engineers themselves. Often a concern within BIM and the wider construction industry, there is a tendency to fear that, as technology develops, traditional skills will become null and void, with people instead relying solely on technology.

Yet, contrary to this opinion, as advanced as our modern-day computer and software scripts are, they are of no value in isolation. The successful incorporation of parametric design is more involved than simply running a script and letting the computer generate its own outputs, with no boundaries or controls. In order to use parametric design tools both correctly and successfully, the knowledge and expertise of an experienced engineer is essential. Only then can you control and have an understanding of the required parameters you are inputting, the variables you are analysing and validate the outputs from the script.

More recently, this increased focus on computational design is resulting in new graduates entering into the engineering industry who now possess greater computational programming skills. These new skills, technology and software represent an exciting step forward within the BIM and engineering industry and, when used correctly, can further expand and augment – not replace – an engineer’s knowledge, perhaps in the same way that the introduction of the calculator would have done many years ago.