Skyscrapers are set to transform the London skyline, but some fear they will destroy the capitalÝs heritage. GMJ Design has developed a huge digital 3D model of the city to help ensure that key landmarks are never obscured from view. Greg Corke reports.

When Sir Christopher Wren was finally granted planning permission to build St PaulÝs in 1675, few would have thought that his cathedral would go on to dictate the size, form and location of London architecture in years to come. Protecting lines of sight to WrenÝs masterpiece is now one of the primary considerations when granting planning permission for new buildings in the City of London. And while skyscrapers are particularly sensitive to this policy of preserving the CapitalÝs heritage, smaller buildings also have a responsibility to key London landmarks.

Of course, the complex process required to gain planning permission goes way beyond protecting views of St PaulÝs or Westminster Palace from select vantage points. Architects have to demonstrate to planners that their building will have a favourable impact upon its immediate location and within each planning application there are a series of local views that need to be produced. This has typically been a costly, lengthy process, so any technology that can help give feedback within a matter of hours is sure to make architects and developers sit up and take notice.

GMJ Design, a London- and Paris-based visualisation firm, has developed a 1:500 scale digital model of central London designed specifically to streamline the planning process. Architects are able to drop their models into the London GMJ CityModel and GMJ Design will give them instant feedback on how their design will impact the CapitalÝs skyline.

The origins of the London GMJ CityModel, can be traced back to 1990 when GMJ Design started out creating design visualisations for architectural competitions, PR, and marketing. However, over time an increasingly important part of the firmÝs repertoire became planning work.

In the early days the company developed a technique called verified views, where a series of photographs would be taken of the proposed site, a survey commissioned and the results combined with the 3D building design inside a digital model. A number of still images derived from that data were then used as the basis for a formal planning application.

It was out of this type of work that GMJ felt there had to be a smarter and quicker way of doing things. ýWe thought that if we could build a single model of London that was holistically accurate and covered all the areas that we needed then we could provide for clients a base upon which they could immediately place their proposals,¯ explains Didier Madoc-Jones marketing director, GMJ Design. ýFor the very early stages of a project architects and their clients want to experiment with different shapes and forms; they want to push the boundaries; they want to see what they can do. Our model can enable them to do that. They can give us their scheme and we can put it on the model. Within hours we can give back to them hundreds of views that demonstrate the impact that their building will have on its surroundings.¯ 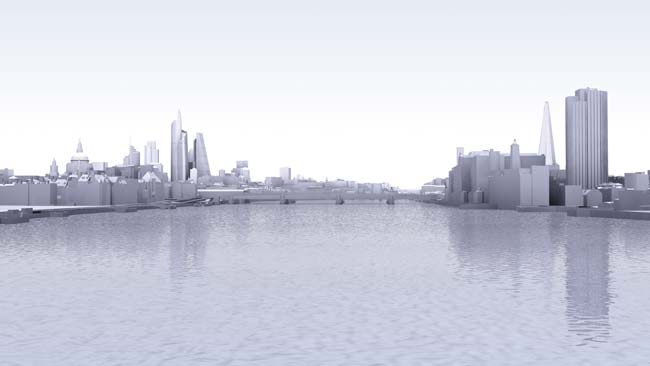 Heights within GMJÝs London CityModel are accurate to within 100mm.

It took GMJ Design nine months to generate the thirty-six square kilometre model of Central London, using a combination of aerial photography and ground control survey points. The company prides itself on the quality of its model, which for planning purposes needs to be accurate across a very wide area. Line of sight studies, from Hampstead Heath to The City for example, need to be exact. On a smaller scale, the modelling technique used by GMJ Design means that heights are accurate to within 100mm and everything is modelled down to the finest detail.

ýWe used 10cm aerial photography, which was stereo offset so we could get our height information by the parallax shift between the two photographs,¯ explains Robert Graves, Creative Director. ýEach 100m squared tile was rectified and stitched together and fixed to a survey with around nine ground control points. With that we get 300mm accuracy across the whole area, with heights accurate within 100mm.

ýItÝs a good process and can generate the topography of the landscape, down to even the camber of bridges and everything above 100mm can be modelled – chimneys, dormer windows, parapets, everything you can see.

ýWhile some of the process can be handled automatically, it is largely a manual process because user interaction is required in order to decide what is a building eaves line, what is a pavement, what is a tree, and so on,¯ adds Graves.

The process involved to get the data into 3ds Max, the design visualisation application favoured by GMJ Design, was refined many times over the course of the project. The model was originally generated in specialist GIS software to create a polygonal shape file (SHP). The data then went through a set of translations, first to get into MicroStation DGN format, then into 3DS, at which point GMJ Design put photographic textures on for the roofs and the walls. When the model was brought into 3ds Max there were quite a few anomalies in the data set and time was spent correcting these and then texture baking two photographic maps – one for the walls and one for the roofs.

ýThe wall textures arenÝt brilliant,¯ explains Graves, ýas they were only obtained from aerial photographs, but they first act as place holders for us, and over time we can replace them with better photography.¯

However, for line of sight studies textures arenÝt required, and for aerial view studies they can often make things less clear. For aerial or massing model GMJ Design mostly uses textures to try and sort out what a client would see if they went out on site.

ýOur clients will walk around the digital model and choose view points for their actual design visualisations, which would be put in context using a street-based laser scanner and hi-res digital photographs, which is another service offered by us,¯ adds Graves.

Keeping the model up-to-date is of paramount importance and GMJ Design has developed a rapid detection process which automatically highlights any changes in the aerial photography. ýFrom this data we are able to focus on remodelling specific sites,¯ explains Madoc-Jones. ýThese changes can range from a new mansard window on a roof, trees being removed, or buildings being demolished or appearing out of the ground.

ýThanks to this process we are able to rapidly update areas of our model as necessary. We have already updated around 7.5 sq km which includes the City of London plus immediate surroundings.¯ 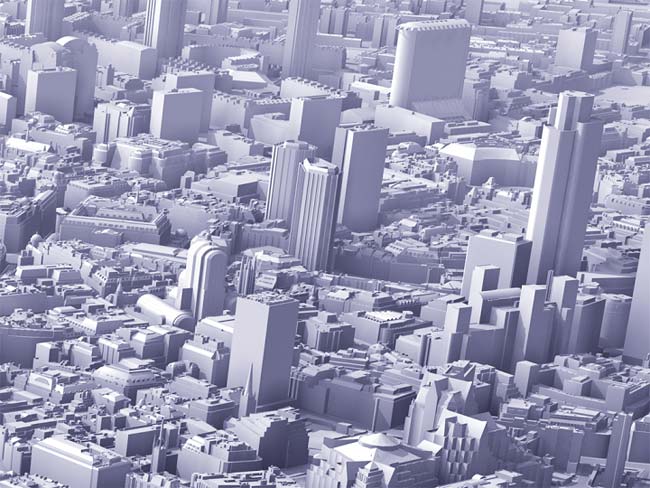 GMJ CityModel close up from East: everything above 100mm can be modelled including chimneys, dormer windows,& parapets

The importance of 64-bit

The London GMJ CityModel contains 12 million polygons and is a one-gigabyte 3ds Max file. Due to the enormous amount of data, the model previously had to be broken down into chunks so it could be loaded up on individual workstations. Throughout the whole modelling process, GMJ was very aware of the memory limitations of 32-bit Windows.

ýWhen we started out on the London model we set our original specification to be much looser. We were only going to model a metre and above, but we found it was a slower modelling process because you were asking people as they modelled to take measurements and make decisions as to what was in and what wasnÝt. We found it was more efficient just to plough through everything,¯ explains Graves. ýWe knew it was never going to be loaded up into one 32-bit 3ds max file, but knew at some point things were going to change and go 64-bit. And also if we were going to go to the effort of doing this we might as well create data that is perfect even if it was slightly beyond our capabilities at the time.¯

Now, with the 64-bit version coming in 3ds Max 9, the project can be viewed in one 3ds Max scene. However, GMJ Design has not yet fully moved to a 64-bit environment. Most of its workstations are still 32-bit, largely because the model only needs to be loaded up in its entirety on the companyÝs 64-bit render farm when it needs to be rendered in full. In this instance, however, GMJ Design has had to compromise on quality as mental ray, the companyÝs rendering engine of choice, is not yet available in a 64-bit version.

ýThe full model views have been done using scanline rendering, but with a quite a few omni lights and simulated global illumination, but when mental ray is ready for 64-bit we will use that. We used to use Vray but it doesnÝt deal with accuracy as well over huge distances,¯ explains Graves.

GMJ DesignÝs model building is not restricted to London and the company has already completed projects in other British cities. Plans are also in place to expand globally.

ýHaving built the London model we have developed a process and procedure that enables us to model areas of urban environment, very rapidly, effectively and accurately,¯ says Madoc-Jones. ýWeÝve built Liverpool, weÝre building Newport for clients at the moment and weÝre looking at other cities around the world to build for other clients, and also extending the London model to include other areas.

ýWith the process weÝve evolved now weÝre aiming at delivering models over one square kilometre in under a week. WeÝve developed a team and a management process that enables us to do that.

ýThe main thing we have to do is acquire the photography. If there isnÝt recent photography then we have to fly it ourselves, and then thatÝs weather dependent, but if factors are within our control then we can move very quickly,¯ adds Madoc-Jones.

While the model currently gives GMJ Design a competitive edge when promoting proposed developments throughout the planning stages, it has already started investigating the possibility of expanding its reach by licensing it to third parties.

ýWe built the model originally with a view to aiding the planning process and using it within our core business as part of a service we offer clients for planning and visualisation studies, but weÝve now set up a new business called GMJ CityModel and weÝre looking at ways of directly licensing the model to certain commercial and government groups,¯ explains Madoc Jones.

ýThrough GMJ CityModel we are looking to enable clients to license large sections of the data that they can actually use. The value we have created is based on its holistic accuracy across a very wide area and weÝve spent an awful lot of time and money ensuring the quality.¯

Indeed, this promise of accuracy in a model covering the whole of central London is certain to appeal to professionals in many other industries, beyond architects looking for instant feedback on their designs in context. From noise and flood analysis, to the film industry where it could be used to locate camera positions, the model has the potential to benefit many sectors.

The challenge for GMJ Design, as it is for any owner of geographic data, is to keep the model up to date. And with the CapitalÝs skyline constantly evolving this will be a critical factor for the continued success of this ambitious and impressive project.