Bentley Systems is developing new software that merges the engineering worlds of structural and geotechnical, from design all the way through to operations. The aim is to streamline workflows, improve accuracy and deliver digital twins that can even predict failures before they happen, writes Greg Corke

3D modelling in structural design is widespread but the same can’t be said for geotechnical engineering, which is still dominated by 2D. This presents a big challenge when it comes to data exchange as the two disciplines don’t play together as well as they should.

One application that does embrace the third dimension is Plaxis 3D, an advanced geotechnical design, simulation, and engineering tool, which Bentley Systems acquired last year.

Importantly, Plaxis 3D is not just about soil mechanics; it also handles soil-structure interaction so engineers can predict what will happen to the soil and how it will react to the structure once it is built. Structural geometry can be imported from CAD and analysis applications. Elements like piles and anchors can also be defined. But now Bentley has big plans to expand the software’s capabilities much further.

Bentley is well known for its extensive range of structural analysis applications, including Staad and RAM. Adding Plaxis into the mix not only fills a geotechnical gap in its portfolio but gives it the foundation on which to develop an integrated analysis application that can handle both linear structures and non-linear soils at the same time.

When the development work is complete it should give Bentley a unique capability for geotechnical engineering, not dissimilar to a multi- physics system used in mechanical engineering that combines structural analysis with fluid dynamics.

Then the engineer takes it and tries to mimic that through some kind of simple spring or something in their structural model and then they come back and they say, ‘well, the real forces that I got are this; does it still work with what you told me?’”

Bentley has already developed an initial workflow through its synchronisation software Integrated Structural Modelling (ISM). It allows an engineer to bring a Staad or RAM model directly into Plaxis 3D. “You can start to see the interaction between the soil, the stress and displacement and the structural model,” says Karp.

But this is just the beginning. The aim is to fully integrate the two and create a single simulation environment that includes both the superstructure and the soil. So, if you start moving your geotechnical design, Staad will start changing the design of the structure on top, or vice versa.

“We want to get to a point where we can consider everything together in a single model,” says Karp. “That will be truly ground breaking.”

Solving workflow challenges for the design phase and increasing the speed and accuracy of the simulation is not the only reason that Bentley acquired Plaxis. It also has big plans for geotechnical engineering as part of its digital twin strategy – maintaining a digital representation of the infrastructure and of its geotechnical context over the lifetime of the asset.

“When you think about the concept of the [digital] twin, it’s really going to come into its own in the operations phase of any asset,” says Jan-Willem Koutstaal, Bentley vice president of local account initiatives, and the former CEO of Plaxis.

“Fundamental to any decision you’re going to make on a change in that asset is going to be the geotechnical engineering.

“You use software to assess the initial ground conditions, to understand what you are going to be building on top of, but then throughout the lifecycle of the building you are doing regular observation through sensors in the foundations or building, or surveying with drones.”

The idea here, is that by embedding sensors into the asset or creating reality models through ContextCapture, data can be continuously fed into the software so it can automatically re-analyse the asset based on its changing conditions over time. Such changes could be dictated by subsidence, seismic activity or weather, but there could also be changes in owner requirements or structural strategies.

Importantly, the digital twin could also be used to help predict what might happen in the future. Koutstaal explains that in such a system a green light could denote “you’re OK at the moment,” but if the movement carries on at a certain rate you’ll get orange, a critical state.

This type of predictive analysis could be augmented by deep learning, based on what has happened in the past, either on the same structure or on different structures. The software could then put forward multiple “what if” scenarios, leading to recommendations for pre-emptive action to be taken. In the most extreme cases this could help prevent catastrophic failure. 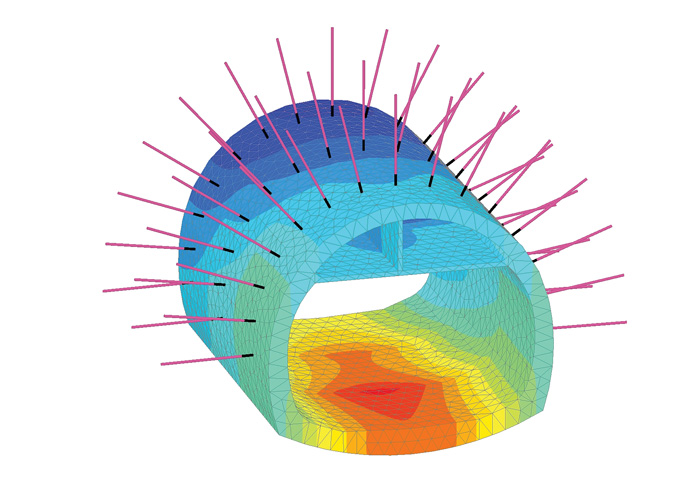 Bentley is long established in the engineering of structures above ground. Now, with its acquisition of Plaxis, it’s looking to do the same below, introducing advanced geotechnical engineering technology to its global customer base.

Marrying the two, previously independent worlds of simulation, is an obvious path for Bentley to take, to streamline workflows and to deliver more accurate results, but arguably the biggest prize will be in applying geotechnical engineering to digital twins.

The concept here is that the asset owner will not only have a digital twin of the infrastructure itself, but of the geotechnical conditions that surround it. And over time, the owner will be able to assess the impact of the changing environment and predict well in advance when maintenance or critical action might be required. It’s a bold vision, and one that becomes even more compelling when you consider that it could save lives.