On the 26th August 2013 Rafael Viñoly’s ‘Walkie Talkie’ building at 20 Fenchurch Street, London, was hitting the headlines for all the wrong reasons. A beam of sun light reflected off the 525 ft skyscraper’s concave-glass façade had just cracked tiles, blistered paint and melted parts of a Jaguar XJ as its temperature soared to a staggering 110°C.

To stop this so-called ‘deathray’ damaging neighbouring properties, brise soleil sunshades had to be retrofitted to the façade. The cost to the developer was a reported £10m (5% of the cost for the entire build).

The destructive power of the Walkie Talkie’s ‘deathray’ re-affirms how important it is for architects to accurately predict how their designs might impact the immediate environment in densely populated urban areas.

They need to ask if the design will become a danger to those around it, not through poor structural integrity, or sloppy construction, but through a lack of understanding of material and lighting behaviours in its real-world environment.

Physically based rendering, or physically based simulation, provides architects, designers and civil engineers with feedback on how their designs will behave in real-world environments.

This includes how materials interact with light sources—both natural and artificial—how light is reflected and refracted, where shadows hit and if there are any points where the material or lighting is not enhancing the environment but damaging it instead.

In the past it was common to review the lighting and physical properties of a design after several aesthetic iterations had been made. This delay was often due to the time taken to create these visuals — up to 24 hours for a single render that showed a photorealistic still of the proposed design.

It is now easy to review the properties of the materials, lighting and environmental factors at any point in the design process with physically based rendering. 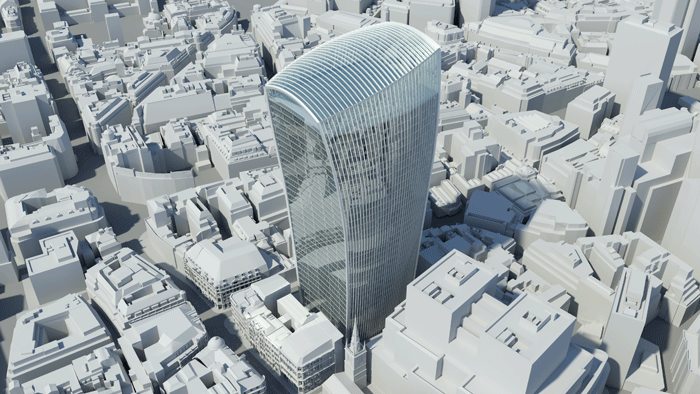 Detailed model of London around the Fenchurch Street area

With tools like Iray+ now more widely available in packages like 3ds Max, access has become cheaper and easier for designers. At the same time, processing power has become more affordable, allowing for more real time rendering. Designers can thus create as many iterations as required.

In the case of 20 Fenchurch Street a potential problem with reflections from the concave frontage was identified during the review of the second design iteration, but it was believed that the sun would not reach a great a height, or intensity, than the example used in the model. The reflected light it was assumed would, therefore, never form a concentrated beam.

If the designers had combined physically based rendering with interactive render modes the design could have been continually tweaked and reviewed to make sure this hypothesis was correct.

Design visualisation specialist Lightworks decided to do its own physics experiment into the deathray phenomenon. It took a detailed model of London around the Fenchurch Street area, inputted the exact longitude and latitude of the building, set the time and date to midday on 26 August 2013 (when the deathray occurred), and using Iray+ inside of 3ds Max, set up a physical sun and sky model and added some physically based materials, such as glass, to the model.

Using the Irradiance mode in Iray+ for 3ds Max, the light energy was calculated in the scene — with a minimum and maximum lux value. As the time was moved closer to midday, a hotspot formed on the street, with a maximum lux value of about 500,000, which translated accurately to 110°C. 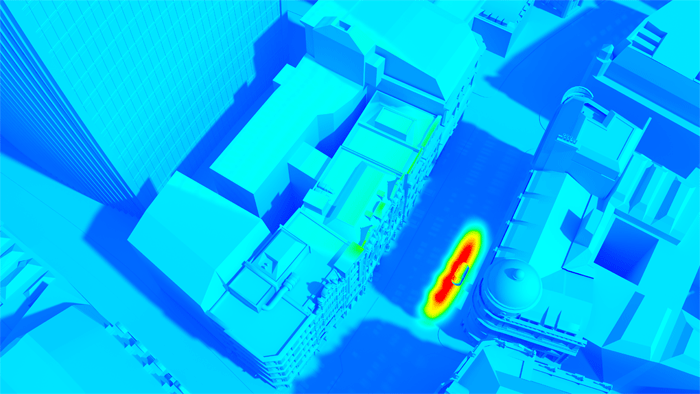 Further modelling found that, had the designer increased the curvature of the building by as little as 10%, the light and the heat of the sun would have been focussed into a much smaller, much more intense hotspot that the company has dubbed the ‘ultimate deathray’. This could potentially be up to 30 times the power of sunlight. Which could have been enough to melt the tarmac on the street.

When undertaking lighting reviews it is important to analyse the diffuse and specular reflected light; in the case of 20 Fenchurch Street it was the specular component of the light — or caustic — that created the concentrated beam.

The combined analysis of diffuse and specular light, was, until recently, hard for designers to achieve as most applications cannot measure the specular light; it is a key feature in the Iray suite of products. This sentiment was echoed by the building’s architect Rafael Viñoly in an interview with the Guardian newspaper, where he admitted that he predicted the building might reflect hot sun rays to the street below but “didn’t realise it was going to be so hot.”

“There was a lack of tools and software that could be used to analyse the problem accurately,” he said.

However, Lightworks believes that with continued developments in visualisation technology and the combination of ray-tracing, real-time and interactive rendering, design review has become much more accessible across all areas of the product pipeline.

These visualisation programmes, when supported by scalable hardware options, means that architects and designers can easily set-up multiple interactions for review; making sure that minor changes to a building do not have a negative impact on its environment.

Aside from the obvious benefits of not melting cars or having to retrofit millions of pounds worth of sunshade equipment to 525 ft skyscrapers, the developments in physically based rendering provide information that can be used in a number of industries and applications, including automotive and green energy production.

In the case of energy production, a concentrated beam, can be specifically created and directed to an energy capture point close by, where it is then converted into electricity.

Had Rafael Viñoly and his team had access to tools like 3ds Max and Iray+ they might have been able to confidently predict the issues earlier in the design process, enabling them to specify a more absorbent glass or even an alternative design for the façade.

Autodesk Forma: one platform to rule them all?
Digital twins: the case for open-source
Five steps to better project delivery
How architects can help the Metaverse live up to its hype
New regulations driving digital transformation
Autodesk
The future of AEC: an executive perspective
Video: NXT BLD 2019 – Simeon Balabanov, Chaos Group
Advertisement
Previous Post
Next Post