HP’s latest dual CPU workstation packs a punch for design viz but also offers an attractive proposition for architects who want to start with a single processor and add a second as and when workflows change.

As far as desktop workstations are concerned the HP Z640 is in a class of its own. Primarily a dual CPU machine, it is also perfect for architects that want a workstation to grow with their needs. Start off with a single processor then add a second later, when multi-threaded design viz workflows become more demanding.

With the second CPU housed on a riser module, along with dedicated memory and cooling fans, a CPU upgrade can literally be done in seconds. There’s no messing about with thermal paste and heatsinks — levers, green touch points and blind mate connectors help mount the module effortlessly on the motherboard. It’s an extremely impressive piece of engineering that also results in a notably compact 175 x 465 x 445mm chassis (as the CPU and memory sits on a board of its own, less space is taken up on the motherboard). 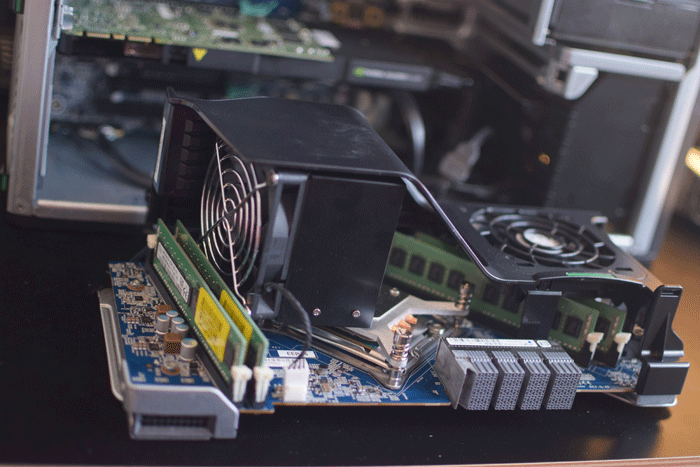 The second CPU comes on a riser board pre-configured with processor, memory and fans for easy installation

This theme of serviceability continues throughout the HP Z640. The side panel comes off easily with a pull on the handle, drives clip into trays that automatically connect to power and data, and should the power supply unit (PSU) develop a fault it can be disconnected, pulled out and replaced in under a minute. Everything about the chassis is designed for easy upgrades and repairs. No tools needed and no fiddly screws to lose.

The chassis itself is solid and well constructed. A handle at the front is integral to the industrial design, while another pops out at the back making it easy to lug the 15kg machine around the office. A new slimline DVD drive leaves two 5.25-inch bays free at the top of the machine for additional drives or I/O options, including a media card reader. 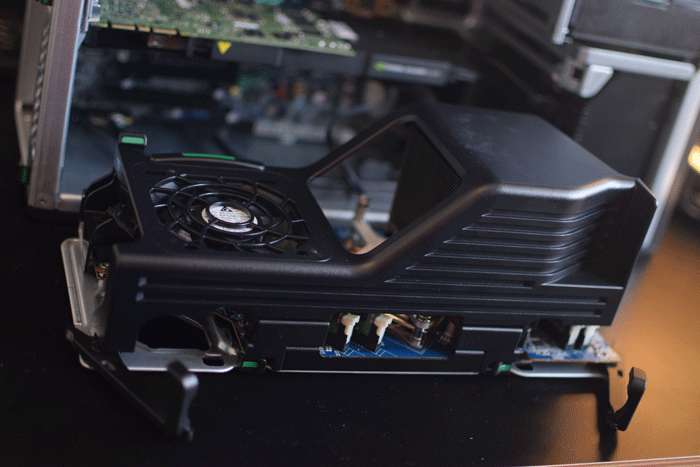 Our test machine was fully loaded with two Intel E5-2667 v3 processors, which boast eight cores and 16 threads apiece. With the Haswell-based Intel Xeon E5-2600 v3 Series going all the way up to 18 cores these might first appear a little light on processing power, but with a nominal speed of 3.2GHz and a turbo up to 3.6GHz they offer a good balance: decent performance in both single threaded CAD applications, such as Revit, and multi-threaded rendering applications like 3ds Max. 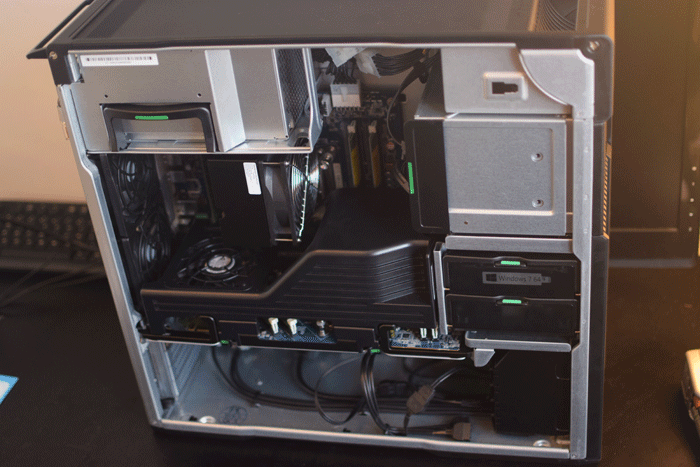 With 64GB (8 x 8GB) of DDR4-2133 memory our machine is filled to the brim and set up to handle some sizeable visualisation models. Those with exceptionally complex datasets are able to buy a machine with a maximum of 256GB (8 x 32GB DIMMs).

For 3D graphics, the HP Z640 is well equipped for high-end CAD with a single Nvidia Quadro K4200 (4GB). For those with more intensive 3D workflows in visually demanding applications like 3ds Max, there’s also the option of an Nvidia Quadro K5200 (8GB) or Nvidia Quadro K6000 (12GB).

Storage is provided by a single 500GB Micron M550 SSD, which fills one of the two internal 3.5-inch bays by way of a 2.5-inch adapter. Both bays feature blind mate connectors, so there are no fiddly cables to play around with when adding drives.

To expand the storage there’s a huge choice of SATA SSDs and HDDs that can be added to the second 3.5-inch internal storage bay or the 5.25-inch bays at the top of the machine. SAS drives are also available but need to be partnered with an 8-port LSI controller.

RAID is supported on the motherboard for SATA drives including RAID 0, RAID 1 and RAID10. For fast PCIe Express storage, which offers double the bandwidth of SATA 6Gb/sec, there’s the option of up to two HP Z Turbo Drives (256GB or 512GB).

The HP Z640 is well appointed for connectivity. A total of eight USB 3.0 ports (four rear and four front) means fast access to external drives. The front top port is ‘always on’ which is really useful for charging your smartphone even when the machine is off.

To boost data transfer rates further there’s an optional Thunderbolt 2 PCIe card, which provides a single Thunderbolt 2 port at the rear of the machine. The 1394a (Firewire) port, a standard fixture on its predecessor, the Z620, has disappeared, but those with legacy Firewire devices can still get support via an optional add-in card. 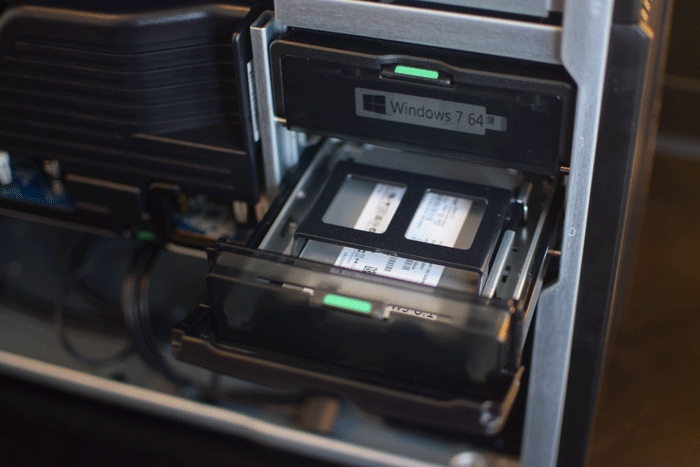 HP pitches the HP Z640 as offering ‘whisper quiet’ computing. With a background hum noticeable even when idle It’s not the quietest machine we’ve had at AEC Magazine. However, it didn’t seem to get any louder under stress, even when hammering both CPUs during an hour-long 3ds Max render.

The HP Z640 is an impressive piece of engineering, offering a solid, well built chassis, great customisation and plenty of processing power to handle demanding design visualisation or simulation workflows.

Some may find our test machine to be a little light on storage capacity, but this can be easily remedied by adding one or more 3TB SATA HDDs. Alternatively, boost performance by swapping out the 512GB SATA SSD for a HP Z Turbo Drive, primarily to get significantly higher sustained read/write speeds over the PCIe interface.

Looking beyond the system as an off-the-shelf dual CPU workstation, the HP Z640 also warrants closer attention by those who want a single CPU machine to grow with their needs. The ingenious riser board makes it easy to add a second CPU later when a quicker turnaround is needed on ray trace renders — or indeed when budget permits. 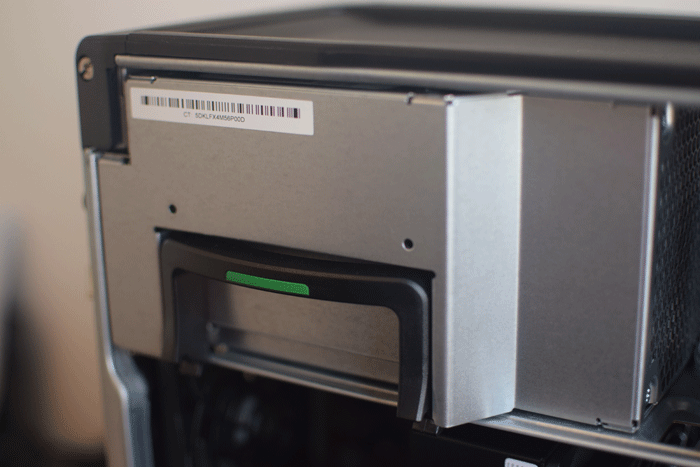 The Power Supply Unit (PSU) can be swapped out in under a minute. Simply disconnect the cables and pull out with the green handle

HP says putting CPU, memory and fans on a dedicated riser board helps drive down the cost for single processor configurations. This all sounds entirely logical but, unfortunately, HP was not able to put an actual cost on this in time for this review going live. We weren’t given an overall system price either so contact an HP reseller to find out more.