Laser scanning has been threatening to go mainstream for a number of years, but the high cost the of hardware and software has kept it in the realms of the specialists. A new UK start-up combines the power of the cloud with new algorithms to break the hegemony, writes Martyn Day

Laser scan data is transitioning from the realms of the surveying and specialist reality capture firms to the workstations of architects, fabricators and builders. It had been hoped that the increased level of commoditisation would drive down prices but laser scanners where bundled with the associated point cloud software remain stubbornly costly. While the data capture devices may well remain at a price premium, the software which registers and processes the point clouds, is certainly open to competition.

To date, nearly all the software solutions for processing point clouds have been desktop-based (Leica Cyclone, Faro Scene, Trimble Realworks etc.), with some cloud services to stream / view captured sites. A new UK start-up, Correvate, aims to use the combination of cloud processing power with a new advanced registration algorithm to speed up workﬂows and broaden the deliverables from scanned data. The company has also implemented a token-based pay-per-use system, removing the high-ticket entry price of its competitors.

At the heart of Correvate’s Vercator software lie patented algorithms which automatically align 3D point cloud datasets. These were originally conceived within the University College London’s (UCL) Department of Electronic and Electrical Engineering but have now been exclusively licensed to Correvate which is leading their development programme.

Vercator’s registration is not target-based, but works by fnding natural features within an uploaded series of overlapping scans and calculates vectors across the whole dataset.. There are typically millions of these features, which are used as reference points to perform horizontal and vertical alignment between the overlapping scans, processed by the Vercator registration engine. By opting to use so many vector features to align the point clouds, instead of a handful of targets, the software can increase the accuracy of the result. And by using the power of the cloud, provide the beneft of automation and signifcantly reduce registration time. Correvate estimates its software is anything between 60% and 80% faster than a typical workﬂow (manual registration, plus processing time) and the larger the dataset, the bigger the beneft. Whilst the registration process can be target free, therefore enabling users to modify their site methodology to ultimately become quicker and more effcient during data capture. Targets can still be processed should the user wish to implement site geo-referencing. 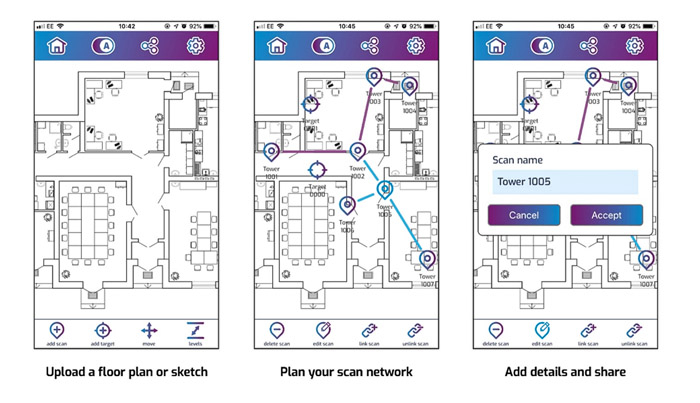 Vercator software is hosted in the cloud, which means it’s everywhere, on desktop or mobile. Scan data can be uploaded directly from site or when returned back to base. As scan fles are notoriously big, upload times are a potential drawback vs a traditional workstation approach. Nobody wants to upload 100GB+ of fles over a 4G mobile. However, many city-based building sites do have decent WiFi these days and the imminent roll out of 5G will be a game changer for big data on the move.

The Vercator Field App runs on a mobile device and allows the mapping of scanned positions relative to the building layout. Site plans can be sketched out and images uploaded to provide a backdrop to place scan markers onto. A network of scan locations is built up along with the corresponding referenced pairings, which can be read by the registration software. This reduces the initial processing as the software knows which locations overlap thus giving it a pre-fltered head start.

On a workstation, Vercator is accessed via a browser. Users log into their account and start by creating a new project. Files can be uploaded to Vercator’s cloud storage or a company’s own hosted service. Scans are selected and added to the project and then the network is added, indicating the sequence and relationships of the fles. Vercator supports ptx, pts, e57, Faro ﬂs, Z+F zfs, Riegl rdbx formats. If the Field App is not used, perhaps when working with older scanned data, a ﬂoor plan can be added and the scan nodes moved to their relative places.

There are a number of user defned preprocessing settings which drive the quality of the output: max distance threshold, resampling, coarse and fne registration settings. Jobs are then submitted to the cloud server and you will receive an email on completion. The system frst produces a coarse registration and then a fne one. For those that want a bit more information on what’s happening, there are progress bars that show what the software is currently doing on the job, conversions, preprocessing, registration etc.

Completed jobs can be viewed online with a range of useful interactive tools. It’s possible to change the colours of the scans, measure, create clipping planes, isolate scan sets. After the coarse scan, if the result is correct, then proceed to the fne processing and viewing.

Once the job is completed the resulting registered scan or scans can be exported in a number of industry standard formats: xyz, ply, e57, pts, las, laz and rcs. Vercator will provide a link once any conversion has been processed. It’s also possible to simply download the matrices required to align the scans which may be held locally, negating the need to go for a big download. 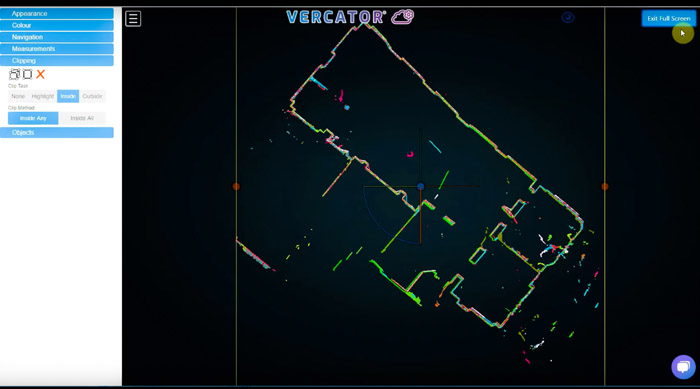 Correvate’s vision goes way beyond registration but this is the low hanging fruit of the existing laser scan market. The company realises that by being in the cloud, it can connect its services via APIs to the growing number of popular cloud-based collaboration systems which companies like Autodesk have developed (Autodesk Construction Cloud which includes BIM 360). Correvate has plans in place to utilise Forge components in its software development. While Construction Cloud is adept at handling BIM and drawing data, the special needs of laser scan information and increasing demand for its use will bring all sorts of possibilities.

The biggest development opportunity for Correvate is applying various Artifcial Intelligence (AI) applications to the real-world data to solve key issues, such as ‘Scan to BIM’. As the system is inherently built on vector-based feature recognition, the company has set its sights on addressing the gnarly problem of extracting intelligence out of a dumb fle consisting of 3D points – recognising windows, doors and ceilings and creating respective solid entities. As the software is based on the cloud and fully automated this could be all part of the same process. Imagine a series of unregistered scans being uploaded to Vercator and the resulting native Revit BIM model placed into BIM 360, untouched by human hands! Similarly, you could scan an entire building and get an asset management model from the items identifed within the scan. The company is already hard at work at developing this technology.

Vercator is paid for by tokens. One registration is 1 token = 1 scan. A registration process between 100 uploaded scans is 100 tokens. You can ‘pay-as-you-go’ or buy through a monthly discounted auto replenish system. The more tokens you buy, the bigger the discount. For comparison, 500 tokens on PAYG is $630, while on auto replenish it’s $560. There are special deals for academic and educational users.

Correvate has developed a unique cloudbased solution which is frst aimed at assisting the traditional scanning market by automating and speeding up registration with massive parallel processing, bypassing many of the current desktop application barriers, such as high cost of ownership, time to get accurate, highly usable results and bypass throughput limitations, should they be man or machine. While it won’t replace products like Leica’s CloudWorx for the post-production work of manual creating 2D drawings or performing surface analysis, it can get you to that point faster. In the future (hopefully September) Vercator will automatically create the surfaces e.g. walls etc and then from these surfaces create takeoffs for 2D linework e.g. ﬂoorplans, sections and elevations.

Vercator’s approach to feature recognition puts it in good stead to develop the next stage of AI-derived models that go beyond the current survey deliverables from point clouds. The aim to automate the Scan-to-BIM process from individual unregistered scans would truly be revolutionary in the construction industry. Watch this space. 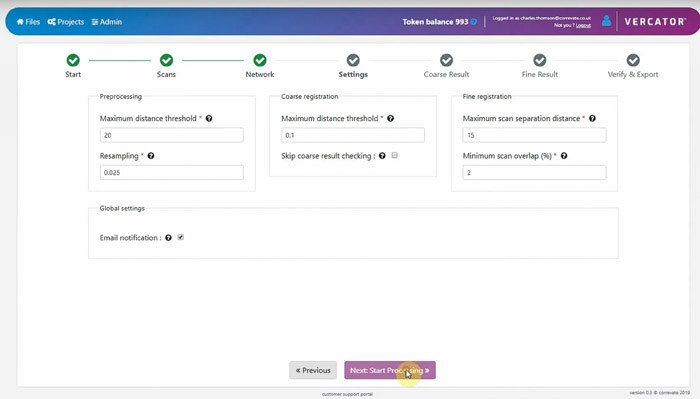 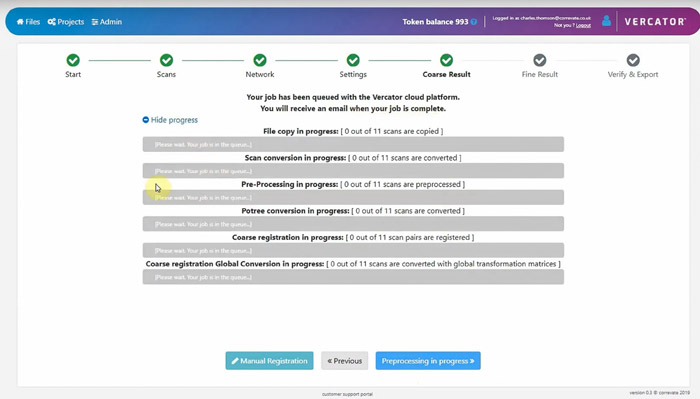 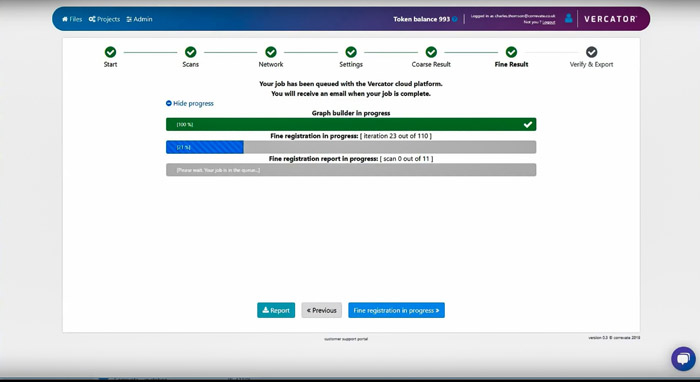