Intel is back with its impressive new generation processors. From mobile workstations to high end desktops, IntelÝs Core 2 Duo and Xeon offer something for everyone. This month we look at machines from CAD 2, Scan and HP.

In the last issue of AEC we looked at Woodcrest, IntelÝs latest desktop Xeon CPU, which is a derivative of its new mainstream processor, the Core 2 Duo. In this monthÝs magazine we see the Core 2 Duo go mobile courtesy of technical workstation specialist, CAD 2, who has just launched its first Core 2 Duo mobile workstation, the Imagine Go-Duo2.

Codenamed Merom, IntelÝs new mobile EMT64 dual core processor is remarkably similar to its desktop counterpart – the main difference being the speed of the Front Side Bus (FSB) and the maximum clock speed, which peak at 667MHz and 2.33GHz respectively with the T7600 model, featured in our test machine.

While the slower FSB is due to compatibility with IntelÝs previous generation Mobile 945 Express, the reduction in clock speed is designed to limit power consumption to around 30W. This same regard for battery life was not given by Nvidia, however, when it designed the 512MB Quadro FX 2500M graphics card, which sits at the heart of CAD 2Ýs Imagine Go-Duo2, and draws up to 100W of power. While this limits the amount of time you can work away from a power outlet, it does mean you have an extremely powerful 3D graphics card at your disposal. In terms of memory, the test machine was kitted out with 2GB of DDR-2, but can take a maximum of 4GB. As the Core 2 Duo is a 64-bit processor, those running Windows XP x64 Edition and compatible applications will now be able to work with models over 2GB in size when theyÝre on the move. CAD 2 will be able to support this Operating System once Nvidia ships its mobile 64-bit graphics drivers.

The 17 inch TFT has a native resolution of 1,920 x 1,200, which is great for maximising the amount of CAD data you can fit on the screen but can make it hard to read small text and icons, though third party software can improve this. The screen also has an X-Black finish, which makes black more black, colours brighter and image quality arguably sharper. Some love it and others hate it. In this instance IÝm one of the others as I find it far too reflective under certain lighting conditions, but a matt finished display is also available as an option if you so choose.

The test machine shipped with a 100GB high performance 7,200RPM S-ATA drive. This can be supplemented with another S-ATA drive at the expense of the DVD drive and configured in a Raid 0 array for speed or Raid 1 for fault tolerance. This will, however, put further load on your battery. A much more effective move would be to replace the DVD drive with a second battery, in effect doubling battery life.

The mobile workstation is kitted out with all the standard features including integrated high speed wireless LAN, Bluetooth, 4x USB 2.0, Firewire, Gigabit LAN, 56K modem, serial, IrDA & PCMIA. Less standard features include a 4 in 1 digital memory/smart card reader a 1.3 Mega Pixel digital camera and a DVI output to connect to external TFTs or digital projectors. For true mobile connectivity, thereÝs also a 3G Internet Option, which is fitted in the internal mini-pci socket.

The keyboard is excellent, firm and responsive and features an extremely useful numerical keypad. I was less impressed with the touchpad which often missed my double clicks, though serious CAD users would most probably be using an external mouse.

At 3.76kg CAD 2Ýs Imagine Go-Duo2 is not the lightest notebook you can get your hands on, itÝs unlikely to win style awards, and battery life for 3D CAD isnÝt great unless using two batteries, but it certainly doesnÝt disappoint when it comes to raw processing power. ItÝs up there with most desktop workstations and for the first time gives mobile users access to the full extended memory benefits of 64-bit environments, and with growing model complexity high-end CAD users who spend time away from the office are sure to take notice. 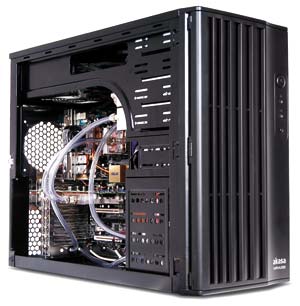 Nearly ten years ago we reviewed a workstation that had a mini refrigerator bolted onto the bottom and was used to pump coolant direct to the CPU in order to take the heat out. This was the nineties and overclocking was all the rage ± cranking up a CPU by 50MHz or so was the closest thing to heaven for some PC enthusiasts.

While the extra GHz did make a significant difference to performance, the process of taking out the additional heat produced by overclocking this machine came at the expense of peace and serenity. Fridge pumps are noisy and this one was no exception. Fastforward to 2006 and while overclocking is still prevalent in gaming circles, it is the reduction of PC noise that is now receiving widespread attention. All the major workstation vendors are addressing this problem with custom-built ductwork and large low duty fans, all designed with high-tech Computational Fluid Dynamics (CFD) computer analysis – and the results are very impressive.

Bolton-based Scan has taken a very different approach to cooling for its latest 3XS workstation. In search of the near silent workstation, the company has turned its back on fans and looked to cutting edge water cooling technology from a company called Alphacool. The system works by pumping water around your workstation through a network of plastic tubes. The water gets right to the heat sources; with individual cooling units bolted straight on to the CPU and graphics card, (which has had its standard heatsink and fan removed). The hard drives are also housed in individual cooling caddies. The water is then routed to a radiator, which is mounted on the case exterior and takes all the heat out of the system.

ItÝs all very impressive to watch and more importantly unbelievably quiet, but what you really want to know is what exactly is the Alphacool system keeping cool? In terms of components, ScanÝs latest 3XS workstation is built around IntelÝs Core 2 Duo E6600 2.40Ghz processor, with an Nvidia Quadro FX 1500 delivering the 3D graphics, and two Samsung Spinpoint hard drives providing over 600GB of storage. An ASUS P5B Deluxe motherboard sporting 2 x 1GB DDR2 memory DIMMs ties the system together. Collectively, these components deliver truly excellent performance across a range of 3D CAD applications, and when you consider the price of the machine this is even more impressive.

So whatÝs the verdict? If you showed me this system a year or so ago, I would have been bowled over as it is without doubt the quietest machine I have ever used. However, fan technology has also moved on leaps and bounds and there are now a number of extremely quiet workstations out there which use more traditional cooling technology.

My Mum always told me that water and electricity donÝt mix, and while the system feels extremely solid, I would question how resilient the system is to leakage from knocks. My other concern is that NvidiaÝs three year warranty will be invalidated by removing the fan and heatsink from its Quadro FX graphics card, though Scan admirably says it will honour this, despite offering a standard one year guarantee on the rest of the machine.

Those with similar concerns will be pleased to hear that the same machine is also available with standard fan technology, which from testing previous Scan workstations will still make your machine extremely quiet. However, if youÝre looking turn heads with what could rightfully claim to be the quietest workstation in the world, then look no further. 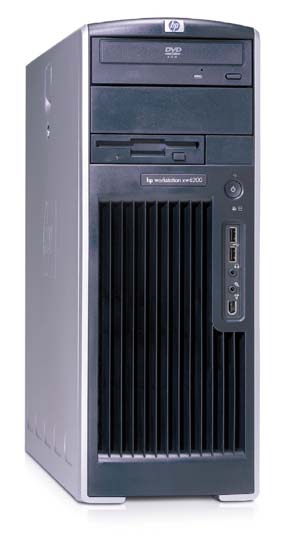 Big performance usually means big computer, but this cannot be said of HPÝs new xw6400 which is the smallest dual Xeon-capable workstation weÝve ever seen ± smaller in fact than most single processor machines.

Despite having capacity for two Xeon 5100 series processors, our test machine was only kitted out with a single Xeon 5150, which runs at 2.66 GHz, and features a 1,333 MHz FSB and 4MB L2 cache. As all new generation Xeons are dual core processors in their own right you still get two physical CPUs in your machine, which will be more than sufficient for most CAD users. At this stage in CAD software development, dual Xeon processor (quad core) workstations are only really likely to benefit those who perform complex multi-threaded calculations, such as those for rendering or analysis.

Despite its sleek compact chassis, the xw6400 is an incredibly quiet machine and we hardly noticed it crunching its way through our suite of compute intensive CAD applications. The CPU performance is excellent and while the 5150 processor is not the fastest in IntelÝs new generation Xeon family, it still provides a huge step up from previous generation processors, and a smaller, but still sizable improvement over AMDÝs Opteron 1000 Series.

The Xeon 5150 is coupled 4GB of DDR2 SDRAM which maxes out the available memory under standard 32-bit Windows XP and still gives a little room to grow in the future if moving to 64-bit Operating Systems. The test machine shipped with 4 x 1GB DIMMs, but the 2 x 2GB DIMM option would give room for expansion as the machine only has four memory slots. 4GB DIMMs will also be available very shortly, giving the machine a maximum of 16GB.

The xw6400 is a truly excellent dual processor capable machine, which offers all the performance benefits of a high-end workstation, without the size or noise usually associated with such machines. It does lack the expandability that a true high-end workstations offer, such as HPÝs new xw8400, which can accommodate up to 32MB of RAM. But with this particular test machine you still have option of adding a second processor, which could become more beneficial in the new year with the arrival of Microsoft Vista.