No one forgets their first virtual reality (VR) experience. Mine came in 2016, and the combination of an HTC Vive and my irrational fear of heights meant that I failed to walk the virtual plank. But despite being overwhelmed by the sense of immersion, I also recall feeling a bit underwhelmed by the resolution and the clearly visible pixels.

Fast-forward three years and we now have the stunning ‘human eye’ resolution of the Varjo VR-1. But while £6,000 for a VR headset of such quality may be nothing for an automotive multinational when it considers the benefits it can bring to product development, for small design, engineering or architecture firms, that kind of price tag is probably asking a bit much.

The new HP Reverb offers a welcome middle ground. It boasts an impressive per eye resolution of 2,160 x 2,160 – four times as many pixels as the original HTC Vive and Oculus Rift. The Pro edition, meanwhile, comes at a very palatable $649.

With inside-out tracking, you don’t need additional sensors, so it’s significantly easier to set up than the original Vive or Rift. This makes it particularly well-suited to portable VR, which is important if you share devices or want to set it up quickly in the boardroom or a client’s office.

I got to try out the Reverb at the recent AR & VR World Summit in London and was very impressed. The first thing you notice is it virtually eliminates the ‘screen door effect’, the grid you see due to unlit gaps between pixels. Then, when you move up close to objects, you start to see remarkable detail in the textures. Edges also appear much sharper.

For automotive and product design, where form and aesthetics are key, this should offer a massive benefit. For architecture, perhaps less so, but this does depend. At the design/development stage, having a sense of proportion and scale is arguably more important than visual fidelity. But when selling a penthouse apartment off-plan, some will place a huge value on being able to see the grain on the leather sofa or the fabric of the curtains.

The benefit of higher-resolution VR goes beyond model fidelity. With the HP Reverb, text also appears much sharper, so you can read smaller fonts. This could be a major benefit for the UI design or for viewing object data. Pro VR may still focus predominantly on the model, but there’s huge potential to expose the underlying attribute information in PLM or BIM applications. I can even envisage it being used to view complex Gantt charts for planning construction projects.

Of course, rendering at higher resolution means you need a more powerful GPU. HP recommends a Nvidia GTX 1080, Nvidia Quadro P5200 or AMD Radeon Pro WX 8200, more than the minimum requirements for most other VR headsets, but it really depends on your workflows and datasets.

With an HTC Vive, your workstation may have been able to handle texture-rich automotive models in Autodesk VRED, but with an HP Reverb, it could struggle to deliver a flicker-free experience.

However, if you only work with simply shaded, conceptual architectural models, the additional pixels shouldn’t present too much of a challenge.

The HP Reverb Professional Edition comes in at $649, which is only $50 more than the consumer version.

The headset looks quite similar to the Oculus Rift, with three soft adjustable straps (two on the side and one on the top), as well as built-in headphones. But it feels more comfortable to wear and weighs a mere 498g without the cable.

It comes with standard Windows Mixed Reality controllers, which pair to the Reverb headset via Bluetooth. We’ve heard reports that the tracking coverage is limited and doesn’t go beyond the 114° field of view, but we didn’t notice any problems in our brief testing of the product.

Theoretically, any limits could be less of an issue for enterprise VR applications where hand movements are typically more controlled than they are in VR games. (My mum playing the first-person shooter ‘Serious Sam’ is a good case in point here.) 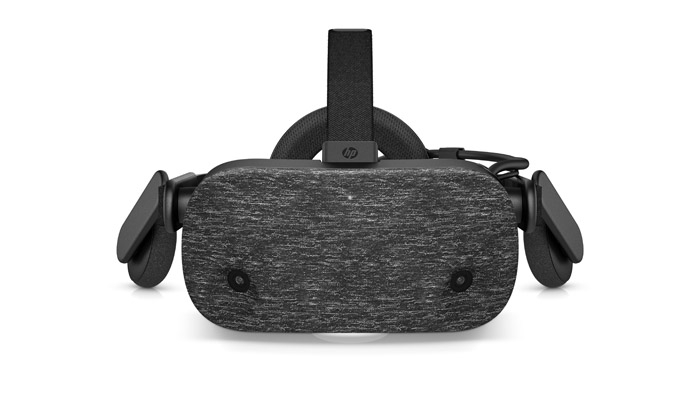 First-generation VR headsets, including the HTC Vive and Oculus Rift, were pretty low on resolution, but they still did an excellent job for many enterprise applications, especially in architecture.

Of course, in order to deliver a smooth VR experience at enhanced resolutions, you’ll likely need a more powerful GPU. The impact of pixels on performance is something we’ll explore when we review the product later this year. For now, the device is sold out everywhere, so it could be a while yet.