AMD has transformed Threadripper from a cost-effective multi-core CPU, to one with leading performance. Greg Corke reviews this impressive workstation for rendering

When AMD first launched Threadripper in 2017, some of the mainstream IT press were left scratching their heads as to what one would do with a 16-core CPU. The truth is, AMD didn’t really appreciate what it had on its hands, so review samples went out to journalists who were more familiar with Killzone than they were with KeyShot, or any other ray trace renderer.

In short, Threadripper changed the game for ray trace rendering on the CPU, or at least paved the way for change. Intel finally had some serious competition and prices of high-end multi-core desktop CPUs came tumbling down. It was no longer just the viz specialists who could justify a workstation with more than the standard four or six cores. With CPU renderers built into CAD and BIM software, along with standalone push-button viz tools, architects and designers also had a strong case for investment. I

For now, the Threadripper 3970X is the flagship model, and it’s this 32-core CPU that sits at the heart of the new Scan WA6000 Viz workstation.

The 3970X has a base clock speed of 3.7GHz and a Turbo of 4.5GHz. On paper, this is a big increase over the 32-core 2nd Gen Threadripper 2990WX it replaces (3.0GHz, 4.2GHz Turbo). But frequencies only tell half the story. 3rd Gen Threadripper offers more performance, better efficiency, and significantly higher Instructions per clock (IPC) – 15% more, according to AMD. In other words, even if the CPUs ran at the same frequency, the 3970X would be substantially faster.

The results from our rendering benchmarks illustrate this perfectly. In KeyShot, the Scan WA6000 Viz rendered our 4K test scene in a mere 69 seconds, a staggering 41% faster than the Threadripper 2990WX we reviewed last year. We had a similar experience in V-Ray, with a 26% lead. We haven’t tested the Intel Xeon W-3175X, but we expect rendering performance would be in a similar ballpark, although the Intel chip costs nearly £1,000 more. 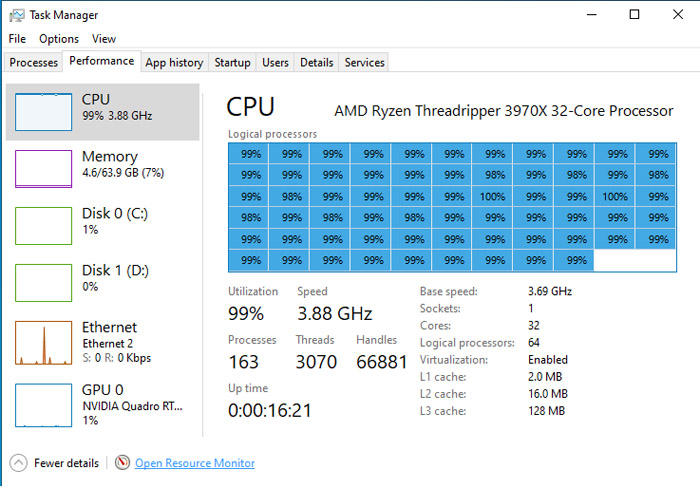 One of the trade-offs with 2nd Gen Threadripper was its inferior performance in single-threaded operations, which are used in CAD software. The difference wasn’t huge, and nowhere near as big as it was with 1st Gen Threadripper, but it was significant all the same. With 3rd Gen Threadripper, this has changed and there really is now very little between AMD and Intel. In Solidworks, for example, it completed our single-threaded IGES export test in 81 seconds, only a touch behind an 8-core 4.9GHz overclocked Intel Core i9 9900K (75 secs) and a 6-core, 3.7GHz, 4.7GHz Turbo Intel Xeon E-2176G (80 secs). The Threadripper 2990WX took 107 secs.

3rd Gen Threadripper also features a whopping 128MB L3 cache and a new unified memory system which theoretically should further improve performance in applications where there are dependencies between threads and memory needs to be accessed by multiple cores. Simulation software is a good example, although you might want to consider error-correcting code (ECC) memory. Also, not many FEA or CFD tools can actually take full advantage of 32 cores. The sweet spot for Ansys Mechanical, for example, is around 12 to 16 cores.

The Scan WA6000 Viz features 64GB of Corsair DDR4 3,600MHz, which should really be considered a minimum for a viz-focused machine like this. 3,600MHz is quite fast for memory and while some workflows will benefit, it certainly won’t be all.

The other notable feature of 3rd Gen Threadripper is support for PCIe 4.0, which offers double the bandwidth of PCIe 3.0. Scan has made the most of this advancement by choosing a 2TB Corsair MP600 NVMe M.2 PCIe 4.0 SSD. Rated at 4.95GB/sec sequential read and 4.25GB/sec sequential write, this should give significant benefits when working with large continuous datasets.

The Nvidia Quadro RTX 6000 GPU is PCIe 3.0. But unless you’re shifting serious amounts of data in and out of the GPU, this shouldn’t make a big difference. In addition, there isn’t much choice at the moment, as the only PCIe 4.0 professional GPU is currently the AMD Radeon Pro W5700 – more ‘mid-range’ than ‘high-end’.

With 24GB GDDR6 memory and a hugely powerful processor, the Nvidia Quadro RTX 6000 is a very serious professional GPU, and one with an equally serious price tag (£3,697*). Those pushing the boundaries of real-time viz or VR will benefit most. Then, of course, with dedicated RT cores, there’s also GPU rendering. But if you’ve invested in a 32-core CPU, and presumably tuned your render pipeline accordingly, do you really need both? Of course, Scan does offer other GPUs, including the Quadro RTX 4000 and 5000, which significantly brings down cost.

By packing so many cores into a single CPU, it’s inevitable that 3rd Gen Threadripper is power-hungry. The 3970X is rated at 280W and, when combined with the 295W Quadro RTX 6000, it’s clear why the Scan WA6000 Viz needs an 850W PSU. Despite the significant power draw, the machine stays relatively quiet even when both CPU and GPU are being hammered at the same time. The sizeable Fractal Design Define R6 case and the Cooler Master MasterLiquid ML360 TR4 hydrocooler cope well with the high thermal output. The CPU maintained a very impressive 3.9GHz (O.2GHz above the base frequency) when rendering for 30 mins.

When you consider just how far AMD was behind Intel a few years ago, it’s incredible to see it now leading the pack in high-end desktop CPUs. And with the 64-core Threadripper 3990X coming next year, this lead is set to get even bigger. At the moment, it’s only specialist manufacturers like Scan that offer Threadripper, but surely Dell, Fujitsu, HP and Lenovo can’t ignore it for long.

Of course, not everyone needs 32 or 64 cores on a desktop machine, and with increased competition from GPU rendering in applications like V-Ray and KeyShot, architects, designers and viz specialists have a big decision to make. But if you’re heavily invested in workflows that can take advantage of so many CPU cores (and lots of memory), not forgetting simulation or point cloud processing, the Scan WA6000 Viz has much to offer.