The hype-cycle for Virtual Reality is over; it’s now time for practical applications to benefit the way we work. What would happen if an architect could design a VR system to solve some of today’s design and collaboration problems? You no longer need to ask that question

Researching interesting technology to show at AEC Magazine’s NXT BLD event is always an enjoyable part of the year forme. A few years ago, I came across a video of a very embryonic design system from a young Dutch architect, Johan Hanegraaf, who had taught himself how to program in Unity and had developed an immersive VR modelling tool for architects.

What impressed me was not just the functionality, but also the intuitive user interface. We’ve had Hanegraaf back at the conference each year to demonstrate how the original idea has developed and progressed towards an actual commercial product. The result of this is called Arkio and it launched last month.

Arkio is a modelling and collaboration application which runs across multiple platforms – PC, Mac, iOS, Android, Oculus Rift and Oculus Quest. It is also available on Steam. It can run standalone or as a real-time collaboration platform for interactive design analysis, customer meetings, or for the assessment of multiple design possibilities.

While it has a fun and easy-to-use modelling system, it supports the import of content from Autodesk BIM 360, SketchUp, Rhino and Revit, as well as supporting common formats such as CSV, Open 3D street map buildings, 2D street maps, OBJ and PNG/JPG. This means you can assemble VR environments from a number of sources and create datasets for any collaborative design requirement.

There are three configurations to choose from. The entry point is free; just download and start modelling using Arkio’s tool palette. You can import images and street maps (up to 25 MB). You can even host a 1:1 meeting for up to 20 mins. The free version also acts as the viewingonly licence when invited to participate in a collaborative session.

The Pro licence is $55/month and, in recognition that no one person will be using it all the time, is ‘floating’ so can be used by any team member. Arkio Pro can host meetings of up to 24 people and import 3D geometry from commonly used design packages (excluding BIM 360). There is no file size limitation.

I suspect most users will go for the Pro version, as they will want to work with geometry imported from their design weapon of choice. Revit support, as you would expect, is especially strong and there is a Revit plug-in which eases export and optimisation of geometry from Revit to Arkio.

Once your session in Arkio is complete you can export the geometry back to Revit as native geometry and families.

This is not to knock the free version; it is a great place to dive in and learn the ropes. While there are desktop versions, the real experience is to go immersive and here the Arkio team recommends the Oculus Quest 2.

The first thing that strikes you about the Arkio environment is the controllers, which are represented by virtual hands holding virtual Oculus controllers. By twisting your left hand, wrist up, the menu system appears. This can then be re-positioned anywhere in the 3D space and its sub-menus can be satisfyingly ripped off and placed in the workspace.

Object snapping is automatically switched on (although it can be toggled off) and lines from the controllers vibrate as they cross over geometry snap points – this can be turned on or off for more detailed modelling work. I have to say I absolutely love the user interface of Arkio. It’s so graphical and easy to understand and surprisingly deep. For a first release, Arkio has a lot of depth and capability.

Arkio has also implemented the experimental hand tracking capabilities of the Oculus. Sensorily, this means in the future users will be able to just use their hands without the need for controllers, which would give a much more intuitive interaction.

The virtual world consists of an infinite gridded floor with blue sky. Up front is a handy table workspace, on which your designs are to be modelled and edited. Using the controllers in combination with controller buttons, it’s possible to scale, zoom, pan, teleport anywhere within the modern space and, if you’re not too careful, off the model space!

The menu allows editing, deletion, painting, sketching, moving, measuring, 3D creation and splitting. You also have control over the camera and the position of the Sun (which casts wonderfully Minecraft-like shadows). You can create sections, maps and set saved views.

Arkio comes with a small selection of materials, architectural textures, landscape, interior textures, as well as content like some funky turquoise trees, people and interior furniture. It’s also possible to import content. Arkio’s built-in assets are mapped to work with Enscape, so the models should play nicely when rendered in Revit with Enscape.

The built-in geometry creation is mainly based on primitives, biased towards rectilinear forms with squares and triangles, which can be glass or solid and are fairly smart once placed near other objects.

At all times Arkio displays coordinate measurements of selected geometry, for handy feedback while modelling. Using the controllers to create geometry is definitely a skill to be acquired. However, it does come with time. I would suspect it would be easier for many to use the desktop version of Arkio with a mouse to create more intricate 3D shapes. Over time, I imagine more complex modelling capabilities will be added.

The upside of the current workflow is you can bring in more complex geometry from SketchUp, Rhino or Revit. The geometry you create using Arkio are converted to mass families or generic shapes when imported back into Revit. Design requirements can be loaded into the system from Excel. This can be used to create modular massing elements which align and snap together when assembled in the model space as masses can be exported back to Revit or Excel.

One of the important things about early-stage design is being able to look at a variety of design options. It’s easy to save models and start new sessions by duplicating previous designs, to come up with a different variation. There is also a history mode which enables you to go back in time through each design edit, so it’s impossible to totally screw up!

I guess it’s possible to define Arkio as a common data environment. It can import from most popular design tools and be used to assemble in situ models for project analysis. By supporting up to 24 people, meetings can handle quite a crowd! If you have a Pro or Enterprise licence you can be an editor of the model. Those with the Free version can view and navigate without editing rights. Each collaborator appears as a head-form in the virtual space and audio is also handled by the system.

Starting a collaborative meeting is straightforward. You create a room, which can be password protected and invite your team. There are tools to mute collaborators, including yourself. If someone is pointing out something they’re saying in the model, it’s possible to click on the menu and jump to their view, as well as being able to bring everybody to your location. Obviously users on all types of supported devices can take part in these collaborative sessions.

Arkio is a unique take on VR-enabled design and collaboration. It’s really fun to use and easy to learn. For a first release it really does have a strong set of capabilities and is remarkably stable. The Free version is very generous and the Pro version, with floating licence, is great value for money. Given the low cost of the Oculus Quest headset, it’s something that most architectural and construction firms could easily rollout across design teams.

With a very strong opening version, derived from extensive testing, I look forward to seeing the next iterations of the product. Being originally conceived by an architect and widely beta tested by architectural and construction firms, it’s safe to say that functionality will always be pertinent to users. It will be interesting to stress test the system with detailed models to see how performance changes with load.

I’d like to see all sorts of modelling enhancements, like workplanes and customisable, cylinders, grids and curves, but I don’t think the intention is to really make this a modelling tool which would replace Rhino or anything similar.

I also hope Arkio can become an ecosystem for all types of analysis tools. As the geometry is collated together in a fast environment like this, it would be great to see companies like Test Fit able to drive generative designs and have more complex simulations running.

By concentrating on creating a strong link to Revit, Arkio is setting itself up as a fantastic adjacent seat, or adjacent headset. It would be great to automatically always have an Arkio version of a Revit model so if you needed to look at it, at any time, you could simply view it in Arkio VR without having to wait around.

Company founders Johan Hanegraaf and Hilmar Gunnarsson will be at NXT BLD in London this autumn. Who knows what additions will come to the software in the next few months?

Read our in-depth interview with the Arkio team

Pre-Arkio demo at NXT BLD can be seen here.

Last year’s demo of Arkio at NXT BLD can be seen here.

Hands on with the Oculus Quest 2

The Oculus Quest 2 is the second version of the ‘untethered’ VR headset. It’s battery-powered and standalone, which allows you to roam around a user-defined physical space, with a digital wall which alerts you should your arms or head leave the reserved area.

The Oculus Quest 2 comes in two versions: one with 64 GB of storage, priced at £299, and one with 256 GB, priced at £399. We have yet to see a good reason to go for the bigger memory, it just depends on how many applications you want to store.

It’s incredibly easy to set up and just needs to connect to the local WiFi. The most difficult part of set up is ensuring the goggles are in the right place to give the best image to your eyes. The sweet spot is very small and getting the head straps right, and not too tight to be uncomfortable, is a skill which needs time to acquire. 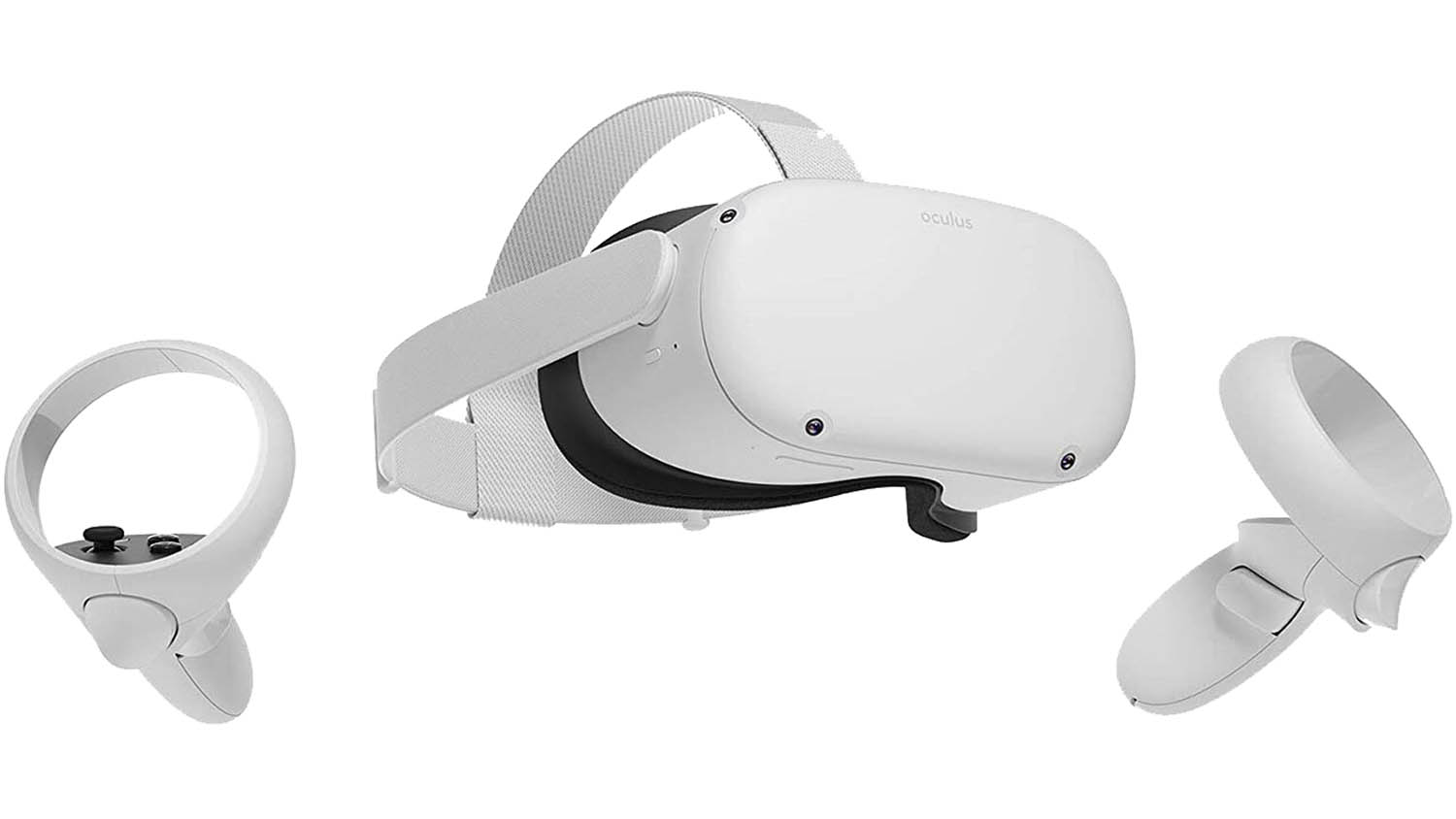 The headset features a microphone, has speakers in the straps and comes with a spacer to help those who wear glasses. There are built in cameras so you can see the real world in greyscale if needs be.

The 1,832 x 1,920 pixel resolution per eye display is pretty sharp and smoothly tracks head movements and the two hand controllers. The screen refreshes at 90 Hz and there are rumours of a 120 Hz firmware update coming soon. Typically, the battery lasts 2-3 hours, but you could strap a portable battery to your head to extend this, as it can charge and run at the same time.

Overall, the Oculus Quest 2 is a very impressive piece of kit for the price. For pairing with Arkio, it was brilliant and we would highly recommend it for a collaborative design session.

The one issue is the whole Facebook thing. To use the device you have to register with your Facebook account, and it just makes you wonder what kind of data they are logging in your usage. Not something you’d want to leave switched on!