The DWG-based BricsCAD BIM has deservedly earned the reputation of the most rapidly developed design authoring tool in BIM. Martyn Day reports from the Bricsys Digital Summit on the latest features in the V21 update, plus other news

While 2020 has been the oddest of years, the Internet has managed to save us from sitting at home wondering what to do with ourselves. All the major software developers have moved their conferences online, and complex new products have continued to be released, on time, even though we can’t find toilet paper, flour and dried pasta in our local stores.

Bricsys Digital Summit provides five hours of design technology entertainment and they even have a house-band of employees that occasionally pop in to entertain.

Before I jump into what was shown, a little about Bricsys. Based in Ghent, Belgium, the company has been developing since 2002 and the founder, Erik de Keyser sold the company to the process plant division of Hexagon in 2018.

Hexagon had previously ported its AutoCAD-based plant application onto BricsCAD and were so impressed they bought the company. Bricsys continues to be a brand within the Hexagon family and actively markets and sells BricsCAD and its vertical products.

The best way to think about BricsCAD is that it’s a 2D/3D DWG-based CAD platform that has a Swiss Army knife of vertical applications built on top. For people who need a draughting tool, it’s a powerful CAD system moulded to replace AutoCAD, and even supports the development APIs ARx, Lisp etc.).

For architects and engineers, it’s a design-centric BIM modeller with automated associative 2D take offs, with support for generative design with McNeel Grasshopper and real time viz with Enscape. For civil engineers, as of last year, it now has terrain/grading tools, road and pipe design. For mechanical engineers, it’s a full 3D ACIS-based solid modelling application with amazing sheet folding capabilities. It also handles point clouds, VR, runs on Mac, Windows and Linux and comes with a perpetual licence or on subscription and in single or network licence configurations. There is also a cloud collaboration document manager with automated workflows. 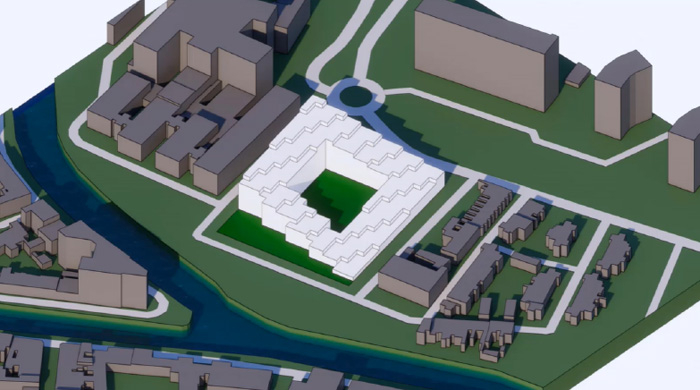 As AEC Magazine is primarily about BIM, it’s worth explaining why BricsCAD BIM is a little different. In products like Revit and ArchiCAD, users select components to model their designs. Each of these components is predefined and comes with many options that need to be configured. This is the ‘Lego’ approach to modelling.

BricsCAD BIM presents the designer with a blank sheet and starts by modelling the envelope of the building using solids. This can be expressive and freeform and the designer does not have to worry about anything except sculping the form. For openings, simple Boolean commands punch holes. Invoking the ‘BIMify’ command then sets the AI loose to automatically recognise walls, windows, slabs, columns etc. and automatically assigns IFC tags to each. From there on the refinement can continue.

The software also offers a whole host of other tools to rapidly get from a solid model to a BIM model. The one thing that Lego CAD gets wrong is sweating the details too early in the process, where what needs to happen is the act of experimentation and design.

This is the third year in a row that we have followed the developments from Bricsys. Each year has brought leaps in expanded functionality. 2020 is no different.

The foundation for all Bricsys tools is BricsCAD. While it started out as an AutoCAD clone, it has surpassed that functionality and has been on its own trajectory for a number of years. While it’s based on DWG, the DWG engine is designed for modern processors and is multithreaded, so it’s fast.

This year BricsCAD has had improvements to image handling, meshes, direct modelling, conversion from mesh to solids, auto mapping of layers in a drawing to those set out in a reference drawing and DGN export added (it already did DGN import).

There have been some truly amazing parametric features added – it can make 2D or 3D parametric blocks simply by selecting geometry and auto-constrains the geometry, giving the user control over which dimensions can be parametrically controlled. At the virtual event, this was shown on a 3D i-beam structural model. One beam was selected, auto constrained, and the software then found all the other elements in the structure that were the same and turned them into parametric 3D blocks.

Sometimes you import a drawing from hell that has an exploded polyline that is made up of many smaller vertices – they are pigs to edit and they make files huge. A demonstration was given of a new ‘Simplify’ command. It took a polyline from a map that was made of 350,000 vertices and reduced it down to 450.

Up until last year, BricsCAD was not a civil design application. Within 12 months so much work has been done, it’s now tackling road layout across 3D topology. Last year TIN (triangular irregular networks) surfaces were added. In V21 it now has powerful tools to generate topology maps and TIN surfaces, overlay satellite imagery, create 3D alignments and extract 2D profiles from the terrain. Corridor templates can be applied and roads modelled and drawing sets created. Impressive stuff.

QuickBuilding is a new command that appears to be BIMify on steroids. While using BricsCAD BIM to perform massing studies — which can be done with direct modelling, generatively with Grasshopper or imported geometry — the new Quick building command will automatically produce a shelled solid, with automatic placement of walls and slabs, storey segmentation, as well and identified spaces. Using a quantities dialogue, users can configure how the Quick Building command implements these intelligent conversions. In seconds, it is possible to go from a shaped mass solid, to the shell of a multi-floor intelligent BIM model.

For massing studies the new QuickBuilding command in BricsCAD BIM will automatically produce a shelled solid, with automatic placement of walls and slabs, storey segmentation, as well and identified spaces

In the demonstration, the start point was a 98 GB laser scan of a building, both inside and exterior. Smart algorithms were used to identify BIM elements within the point cloud, identifying multiple planar surfaces, which then define a space.

In addition to surfaces, it’s also possible to identify solids, such as walls, slabs or columns in a semi-automatic process. This is the start of a process that will eventually deliver the elusive scan-toBIM automation. For now, this is a great workflow tool for those needing to turn point clouds to IFC, much better than tracing as a reference.

Greg Schleusner, director of design technology, HOK explained how they were working with Bricsys to experiment, improving drawing automation. In this instance, the laborious process of creating fire safety drawings was automated.

Fire-specific components can be identified and specified; properties mapped for style definition. Theses are reflected in the drawings and are completely customisable, and reusable in other projects. In fact, BricsCAD BIM lets users create hundreds of sheet-sets automatically and create exactly what they look like. Sheet sets are a background process, leaving the system free to carry on working.

The most important feature this year is BricsCAD BIM’s ability to import filtered RVT models as underlays or as solid lump of geometry. In this release, only the geometry from Revit is imported but because the software has BIMify, it can be used to turn the Revit geometry model into identified IFC components – walls, doors, windows, spaces etc. This RVT is once more an intelligent BIM model.

One wonders if this might even be useful to Revit users who can’t access their old models.

Multi-user collaboration is now possible through a GIT-based version control (open source management tool) which records changes to files over time which works online and offline. As this develops, expect to see some gamechanging, collaborative, granular workflows coming to market.

Last year Enscape joined the ‘Bricsys Collective’. These are developers with whom Bricsys has a high level of integration. This year Epic Games also joined with Twinmotion, which creates ArchViz environments for rendering and animations and also feeds into Unreal Engine for real-time VR experiences. 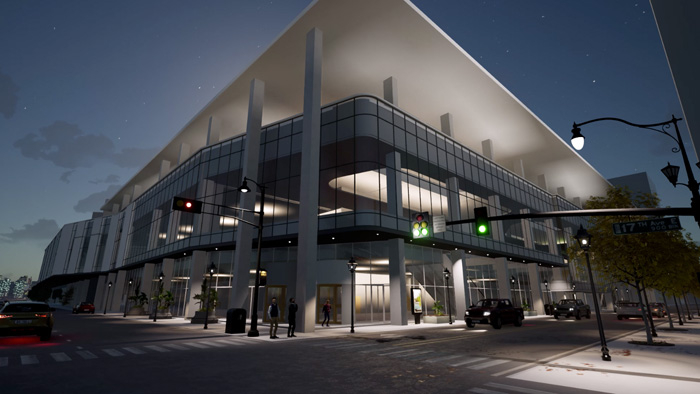 If I had to say BricsCAD had a superpower, it’s in its the ability to recognise patterns and shapes and then perform automation. Blockify, Simplify, BIMify, QuickBuilding, Propagate, DetectFloor are all examples of how the software can search through its database, across all entity types, in 2D or 3D, recognise shapes, patterns, or building components, and then do something quite magical – make dumb things smart.

With every release there is something added to the feature set to assist in recognising or identifying geometry and then applying intelligence, should that be creating a block, constraining geometry, converting 300,000 polylines into 400, identifying a door in a solid model or now getting temptingly close to converting point clouds to BIM elements. It’s an authoring tool with intelligence.

Bricsys is maintaining its development velocity, it’s fleshing out its offerings at speed in multiple verticals and adding intelligence in a way that nobody else in this industry is doing. I always assumed that having a solid modelling engine underneath a 2D CAD tool, or BIM modeller was a liability – solids are heavy and overkill. Time and again Bricsys developers use it to their advantage, from importing Revit models, doing scan-to-BIM or going from mass model to BIM building model in one click.

Check out the demonstrations given in the Summit.