Software and CAD brands are about evolution with the occasional revolution. In the AEC BIM-space we are lucky to havereally mature players: Autodesk, Graphisoft, Allplan, Bentley Systems and Vectorworks.

These firms have all survived as brands and thrived through thick and thin from the early 1980s. Sure, there might have been various name changes, acquisitions, operating system changes, code-base swaps, moves from 2D to 3D to BIM… but it just occurred to me that our little BIM bubble of the software world is incredibly stable; we all benefit from a lot of software development heritage

Looking back at the history of Vectorworks, it started in 1985 as Diehl Graphsoft which produced MiniCAD, which became the bestselling CAD software on the Mac.

The year Diehl launched MiniCAD, AutoCAD was at v 2.1 and Keith Bentley had just started Bentley Systems. In 1999, the first release of Vectorworks replaced MiniCAD.

Nemetschek acquired Diehl Graphisoft in 2000 and Mac users were worried the Mac would be dumped. Roll forward 20 years and Vectorworks is still available on PC and Mac and despite Nemetschek buying Graphisoft in 2006 and now owning three distinct BIM brands. Vectorworks has continued to grow to over 685,000 customers in architecture, landscape and entertainment (stage and set design). As a Nemetschek brand, it seems to be blazing its own trail.

In the past two years, Vectorworks has added some sizable chunks of functionality to its yearly releases – GIS integration, walkthrough animations, historybased solid modelling, sub-D surfaces. Vectorworks 2021 seems like a much more pared-back release, not so much with the big new all-singing and dancing features, but lots of crowd-pleasing workflow enhancements. Perhaps, during a pandemic, focussing on what users are asking for, rather than pushing boundaries is the right way to go.

There are three core versions of Vectorworks, which are pretty selfexplanatory: Architect, Landmark (landscape) and Entertainment (stages and sets). There are core features that go into the Fundamentals product and then a sprinkling of vertical-specific enhancements.

Starting off with the 3D engine, Vectorworks push / pull modelling now supports additional drawing tools like the line objects, 3D polygons and NURBS curves. Other modelling enhancements include simplification of editing solids created with fillet, chamfer, shell solid and more. Rather than navigating through layers of history, you can simply highlight a face or edge for direct editing and speed through your 3D modelling process.

Multi-core processors will get better used by the Vectorworks Graphics Module (VGM) as it has been optimised to better use cache. Vectorworks, the company, estimates that users will see load times boosted by 5x. Also claimed is zero wait when flipping between 3D views, manipulating layers or navigating in 3D with the Flyover tool. 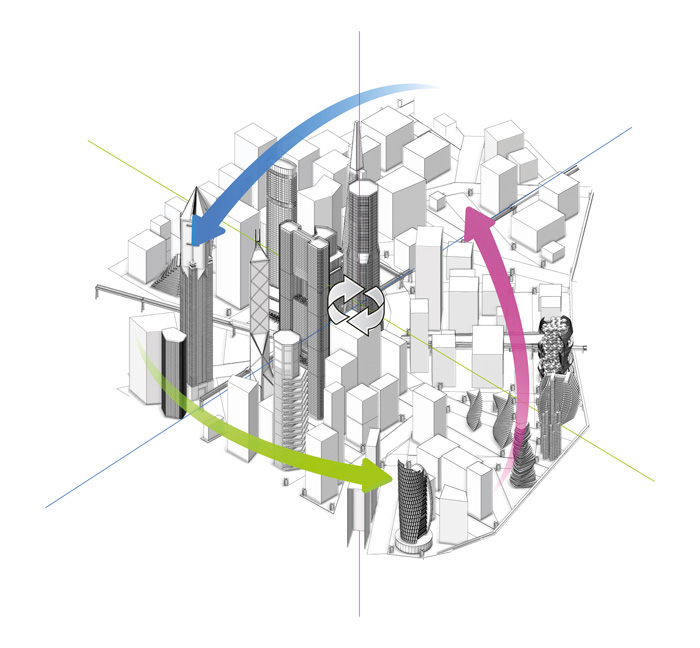 A totally refreshed tool for automating the generation of gridlines creates customisable structural grid lines. Simply draw grids in plan and any changes automatically appear in all views. Multiple configurations of grids can be made for every need or building orientation. The new structural grids are also IFC compatible, aiding collaboration.

With maturity and years of enhancement come a lot of commands and tool palettes. With the new Quicksearch you can find and activate any command by typing in what you think you need. Vectorworks will make suggestions based on the text and the most common tools. I wonder what the results are for ‘thingumy?’ Simply hit the F key, the spyglass icon top right or in the Tools menu at the top of the screen. Results are given as either tools or menus. It also remembers the last tool searched for. 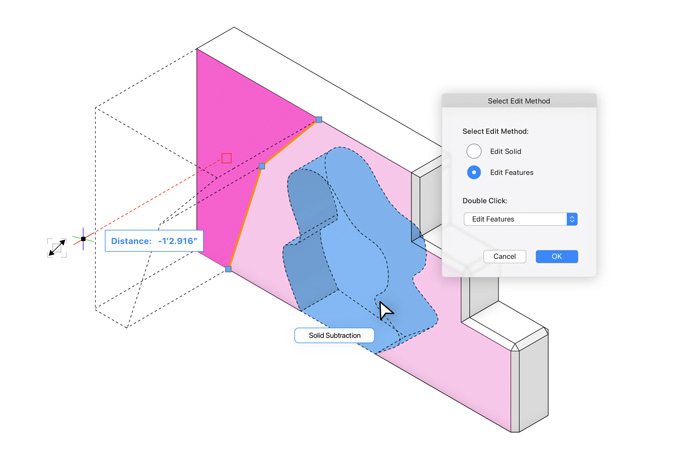 Vectorworks 2021 has a new resource called Materials, which, as you would expect, lets you define materials on 2D and 3D views and sections on objects that support fill. It always shows the correct material in whatever representation style is generated. It eliminates the need for setting extensive property components.

Materials can be compound and are also used to define construction properties and physical properties including specific product data, allowing users to assign any custom properties as needed. This also feeds into material quantities, which can be taken off.

Smartmarkers – drawing labels, section markers, elevation markers and detail callouts now use ‘Object Style’ option. A load of default graphics come with the software but you can design your own from scratch. You can really make your drawings your own.

Site design has seen grading improvements for those who use slope-oriented or point-to-point grading. Networking grade objects automatically update if edits are made to part of a network.

Lighting designers can add pan, throw and tilt for each device. A new Focus Lighting Devices command provides control over visualisation without having to set a focal point for each light, which is time consuming. Additional enhancements to multi-circuit devices make reporting, circuit management, and communication with consoles easier.

All in all, a very functional release with some useful performance and productivity enhancements across-the-board. The direct model enhancements increase flexibility when creating Parasolid geometry and the complete rewrite of the structural grids is excellent. The new materials implementation will be a boon to WYSIWYG display and material choice for rendering.

Vectorworks CEO, Dr. Biplab Sarkar has been CEO since 2016 and prior to that was CTO for seven years where he would have overseen the implanting of Siemens’ Parasolid solid modelling kernel into the heart of Vectorworks (2009), the same technology that’s used in high end aerospace and automotive design.

Vectorworks has been the main Parasolid customer that has been demanding the Siemens kernel team jumps through hoops to provide architectural modelling features, multi-threaded / multi-core and better Mac support. Why is this important? Because the next revolution in AEC will be connecting to digital manufacturing systems and most of the current BIM leaders by volume don’t have solid modelling at the core, which is a considerable benefit. Vectorworks is ahead of the game here.

We talked with Dr. Sarkar around the launch and we discussed how difficult it must be to develop for both PC and Mac, and to get the same functionality on both.

At the time the new M1, ARM processors had not been seen. While having to cajole Siemens into advancing its solid model kernel for architectural use, and then also hassle them for more consistent multithreaded and multicore access, the new M1 processor would need a port of Parasolid to aid development of both Mac to keep up with PC. At the time the Vectorworks team was also evaluating moving the entire graphics pipeline to Apple Metal, which would be required in any move to Apple silicon. All the benchmarks I have seen to date show this first generation of M1 absolutely trouncing this year’s entry-level Intel processors and doing so without generating much heat. It was also a shock to hear that the RAM is built into the actual processor, which is one of the reasons for the speed benefit. We look forward to seeing what Vectorworks will do with the iMac and if it manages to get important components ported over to aid the continuation of the Mac application.