AEC projects have always been collaborative. While BIM gave the design process benefits like coordinated drawings, the added complexity of sharing design data in 3D, from different proprietary systems, from firms with different inhouse standards and, let’s face it, different levels of competency, has driven the demand for validation and checking.

Due to the size of coordinated models, this can’t efficiently happen in the design authoring applications. Thus a whole market has built-up of third-party applications to fulfil a variety of model checking tasks. Historically, the most popular of these have been Navisworks from Autodesk, which is desktop-based and Solibri from Nemestchek, which has different applications based on usage type.

With the move to the cloud, Dutch developer Xinaps has a fresh take called Verifi3D, which came out of beta at the end of summer and should have already had a major update by the time you read this.

Essentially Verifi3D does model collating / viewing, classification, geometry and data validation, clash checking and reporting, aiding ISO 19650 compliance. As it’s in the cloud, Xinaps has been busy hooking up the application to the most used cloud repositories for design data.

With Revit being the most popular BIM tool, it speaks RVT and comes with a plugin for Revit for seamless integration. For open standards, IFC lies at the heart of Verifi3D and can pull together models from multiple sources to check a project. It also hooks into Autodesk BIM360, BIMCollab and BIM Track, with automatic versioning update and simultaneous model linking. Models can, of course, be uploaded from the desktop too.

One of the key benefits of Verifi3D is speed. With a modern cloud infrastructure it certainly shows up older desktop products like Navisworks. File opening, upload from the desktop and filtering can provide substantial benefits in time saved. In some cases customers have said they saved literally hours on some projects.

This performance boost is also seen in model syncing. File linking can be automated and removes the need for a lot of manual work to stitch together document sets.

It’s possible to set-up project access based on roles of members in a team. This could be by job function and / or discipline. Users can also share models, classifications, rule sets and filters between projects and reuse them on any BIM model through project templates that can be built up from previous libraries (stored filters, checks rulesets).

As we were going to press, Xinaps announced that it had co-developed a link between Verifi3D and BIMcollab services, to integrate model checking with issue management. As both applications are SaaS, this can happen seamlessly in the background. BIMcollab is a BCFbased web app used to assign, track and manage issues during the design and construction phases.

This has really exciting possibilities, as when the two systems work in tandem, issues found in Verifi3D checks can be published to BIMcollab in real-time. The user or model owner will be automatically notified of the issue so they can change the design. This opens up all sorts of new possibilities which I don’t think any other model checker can do. This is almost Minority Report ‘precog’ levels of check, verify and solve! 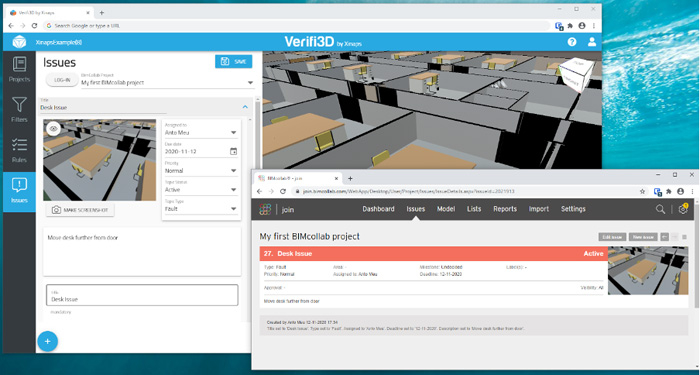 The December update is bringing a pile of goodies: even more speed with IFC engine optimisations, multiple files can now be uploaded at once. Project access can be shared between users via e-mail, there are various improvements to first person navigation and you can zoom to each filtered object in succession.

Xinaps has been working in beta with several really large multi-disciplinary firms over the last two years. This has clearly helped refine the feature set and speed of Verifi3D. As more firms start storing their data in the cloud, desktop-based verification will make less sense, as all the federated drawings will just be an API call away. Verifi3D is already there.

Xinaps has done a good job of persistence of filter and rule sets, throughout all project work, saving time and effort when checking future projects.

It’s kind of hard to work out what’s going on with Navisworks, as Autodesk was rumoured to be no longer developing the product but then recently built a desktop connector for it to work with BIM360 Glue, to augment the features (still) missing from Glue. This workflow, however, still requires Navisworks to be running on the desktop as a client, with all that that entails. Verifi3D is a single environment that was designed to be in the cloud, connected to model libraries stored in BIM360.

Pricing for Verifi3D is € 400 per month per seat and this is a floating licence. As of 1 January 2021, Xinaps will be setting up a UK office, maybe one of the few European firms setting up in post Brexit UK!