In the race to improve the energy performance of buildings, here’s how Sefaira coached a team with limited experience in energy modelling and HVAC design at ASHRAE’s 2015 Lowdown Showdown competition.

How might a four-person interdisciplinary team, with limited experience in energy modelling and HVAC design, collaborate across three time zones and still go on to deliver an impressive proposal for a net zero energy building? That was the challenge facing Shan He, an architecture research associate at Iowa State University; Ken Thomson an engineer at AE Smith Australia; Sravanthi Musunuru, an energy modeller at Building Science Corp USA; and Manalee Nabar, an energy modeller at Bright Power USA.

Most importantly, the design complied with the exacting demands set by the LowDown Showdown modelling challenge, staged by American Society of Heating, Refrigerating and Air-Conditioning Engineers (ASHRAE) and sponsored by the US Department of Energy and the National Renewable Energy Laboratory (NREL).

To begin, the team reviewed the competition requirements to better understand the modelling challenge they faced and the expected outputs for the proposal. From there, they defined a performance-based design workflow that would take advantage of Sefaira’s full product suite.

The real-time capabilities of the Sefaira Architecture Plug-in, it was decided, would be used for testing design options and to create multiple iterations during the initial, fast-paced concept development stage. Sefaira Systems would also be used to carry out HVAC system comparisons and optimisations later on.

This process ensured that every design decision would consider performance impacts, with the software ensuring that model rework and additional set-up time would be reduced — if not eliminated — as the project solution evolved from initial to final concept.

Shan He, the team’s architectural designer, proposed an open floor plan, to increase flexibility and facilitate multiple tenancies. Taking the site’s location within a newly developed business park, into account, she proposed locating the building close to an existing recreation centre and other useful amenities.

Once she had created whitebox models for each concept in Trimble SketchUp, she was able to test their energy and daylight performance using Sefaira’s Architectural Plug-in, a process made easier thanks to the ‘visibility control analysis’ paradigm that Sefaira follows. 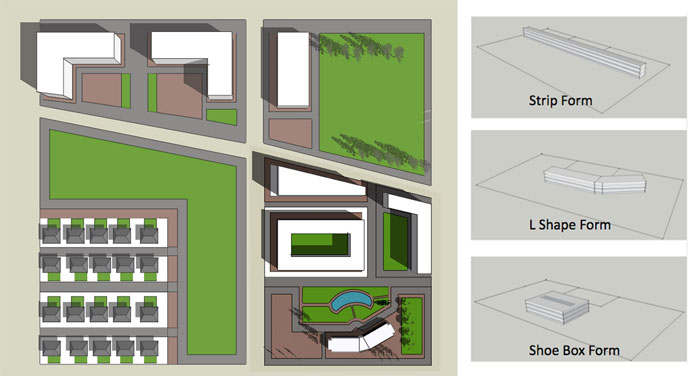 Although the square design option achieved the lowest EUI, its internal spaces received the lowest amount of natural daylight — so the team agreed to focus on an L-shaped building form, in order to balance daylight and energy performance better that could be achieved through a strip or box-shaped design. This L-shaped design would also accommodate the desired number of units per floor and ensure that all building entrances and exits would be closer to the outdoor space, as desired.

Shan focused on a typical office unit in order to investigate the impact that different interior layouts, glazing ratios, window orientation, shading devices and fabric specifications would have on its energy and daylight performance. Shading comparisons showed that a multi- finned shade provided the most optimal daylighting to the interior space, when compared to one option with no shading and another with a simple horizontal projection.

Using Sefaira’s real-time plug-in, Shan was able to test over 70 different models in less than four hours. The result of this iterative process was a significant increase to spatial daylight autonomy, with no negative impact on EUI. 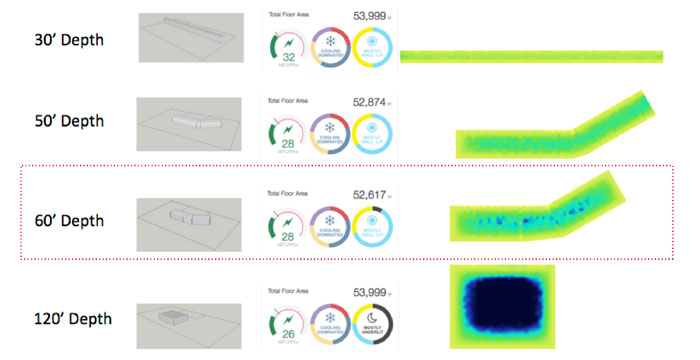 The team uploaded its optimised building form to Sefaira Systems and used the Department of Energy’s envelope and schedule specification for a prototype medium-sized office to define the baseline.

Next, it tested multiple HVAC design options, all with the same baseline values, in order to ensure a controlled comparison.

The baseline HVAC system was a packaged rooftop VAV with reheat, per ASHRAE 90.1-2010. Sefaira Systems calculated its EUI at 51kBTU/ft2/yr. In comparison, one of the team’s proposed systems, a variable refrigerant flow system with DOAS, had an EUI of 2.3 – giving a 95% reduction in EUI and a 28% reduction in annual utility costs.

To reach the net zero energy goal, the team combined the optimised envelope and HVAC system with the energy produced by on-site solar panels (20% efficiency) across the entire roof.

With the final strategy applied, the team just narrowly missed the net zero energy mark: 94% of the building’s energy demand would be met by on-site generation. It is important to highlight that, while their final proposal was extremely similar to the solutions proposed by other teams, Team Sefaira spent a fraction of the time coming to their solution as compared to others. In fact, all of their energy analyses, which totalled 400 simulations from concept to final design, were completed within a total of six hours.

Team Sefaira’s success highlights the ability of the software to reduce the time and cost associated with high-performance design solutions and also to increase a team’s ability to collaborate meaningfully on a challenging project.

For Shan He, it was particularly useful that she could optimise the design such that the energy modellers’ more rigorous analysis in Sefaira Systems confirmed her choices.

2015 was the first year that ASHRAE ran its Lowdown Showdown, but it’ll be holding the challenge again this year, presenting the winning workflow, process and design at its Energy Modelling Conference in Salt Lake City in August.