To help transform a 200 year-old gun tower into a weekend retreat, Piercy Conner architects and Price & Myers 3D Engineering used SolidWorks to ensure that the complex roof structure would satisfy the planning department and be built within budget.

One of the reasons that architects love what they do is that every building they design is different. But it’s fair to say that some buildings are more different than others. Every so often, a project comes around that offers the opportunity to try something that has never been done before. Such was the case for Piercy Conner Architects, when approached by a private client to transform a 200 year-old gun tower on the Suffolk coast into a weekend retreat. In partnership with structural engineers Price & Myers 3D Engineering, Piercy Conner used SolidWorks to ensure that the complex architecture planned for the conversion could actually be built.

Piercy Conner’s design features an ellipse shape, which sits perfectly parallel to the masonry tower, separated by a glazed section to achieve the illusion of floatation.

To defend England from attack by Napoleonic forces, a series of 74 gun towers were built along the East Coast in the 1790s. The expected attack never came and, perhaps because of that, many of these Martello towers remain today. One such tower in Suffolk was recently purchased by a private buyer, with the aim of creating a desirable seaside retreat. Over the years, several towers have been renovated to some extent, but there has never been an attempt to transform one into a luxury, contemporary property. The buyer engaged Piercy Conner Architects to design the conversion.

“The Suffolk tower is in an area of outstanding natural beauty,” explains Stuart Piercy, founding partner of Piercy Conner. “In addition, it has monument status, which puts it in the same protection category as Nelson’s Column. We knew we would have to come up with an extremely sympathetic design since the planning restrictions would be fierce.” The internal design would have its own challenges, but it was the roof that would have to satisfy the planners. “From the start we knew we wanted a contemporary, floating roof,” says Piercy. “This presented two main challenges: satisfying the planning department and designing something that could actually be built within budget.”

Piercy and his team began designing the roof of the tower, initially taking their inspiration from a stealth bomber. “We thought about juxtaposing the defence style of today with that of 200 years ago,” explains Piercy. “But the planners were having none of it.” The next design direction proved more popular. “We settled on a curved, clam shell shape, that would appear to float above the tower.” The architects created a series of CAD models to show the planners exactly how much of the roof would be visible from the ground. Satisfied that the soft, unobtrusive design would blend well into the tower and its surroundings, the planners gave their consent for the project to continue.

Piercy’s design features an ellipse shape, which sits perfectly parallel to the masonry tower, separated by a glazed section to achieve the illusion of floatation. On the sea-facing side the roof lifts slightly to form a roof terrace. The finished roof would feature a tubular steel ring beam supporting steel beams that in turn support timber rafters and a curved plywood skin. A rubber like membrane on the outer surface creates a smooth, seamless finish. “It looks simple and elegant,” says Piercy. “But it’s actually a very complicated idea, since the roof curves in every direction and contains no known geometry. So once we’d designed something that the planners were happy with we then faced the challenge of how to fabricate such a complex roof within a tight budget of only ú100,000.” 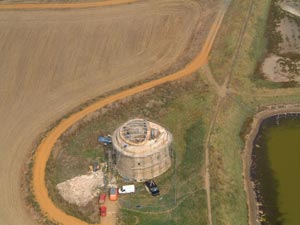 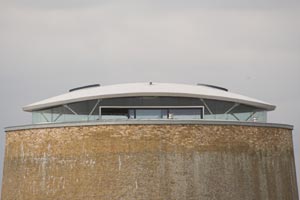 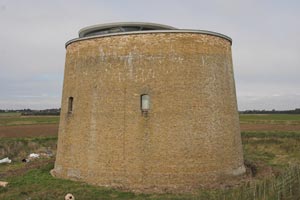 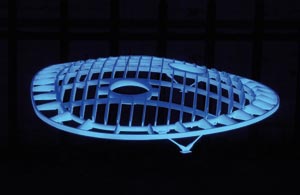 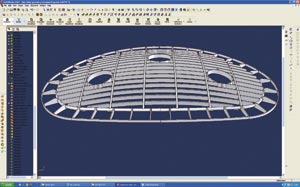 For complex projects such as this, Piercy Conner likes to collaborate with structural engineering firm, Price & Myers – specialists in making extraordinary structures buildable. Price & Myers 3D Engineering department created an intelligent model of the proposed structure in SolidWorks. “You have to use a software you can trust,” says Piercy. “SolidWorks is mathematically stable and you know the data you get will be completely reliable for every stage of the fabrication process.”

The roof’s design created several engineering challenges for the team to solve, but the most pressing was how to stop it from literally flying away. The final shape of the roof is in effect a perfect wing and the engineers calculated that the uplift on the roof could be as much as 22 tonnes. The roof itself weighs only nine tonnes and the Suffolk coastline can be buffeted by winds of up to 100mph. “We used SolidWorks to design the five slender V shaped legs which fix down onto pads anchored a depth of 1.5 metres into the brickwork,” says Piercy. “These braces look great and, contrary to the way they appear, actually hold the roof down, not up.”

Price & Myers used SolidWorks to create all the necessary drawings to make the fabrication process as straightforward as possible. Once the definitive model had been created, this was sectioned to show the structure from every direction. The most important element was the steel ring beam, sectioned to show exactly how it changes shape throughout the structure. “The trick with making a structure like this within budget is being able to describe it to the fabricator in such clear terms that they don’t immediately double their quote,” says Piercy. “SolidWorks enables us to demonstrate the individual sections that make up the overall structure in such a way that the fabricator’s job becomes straightforward.”

Piercy and his team took the design and fabrication information produced in SolidWorks and sat down with their chosen fabricator, a Hull-based firm called CSI, to explain the job. The drawings showed an unfolded version of every section of the roof, demonstrating exactly how each part could be fabricated and fixed together. The fabricators used the SolidWorks drawings to create one-to-one templates of each section of the roof. This was ideal for ensuring that the structural components supported on the ring beam were laid out in exactly the right place. Knowing that the information from SolidWorks would be accurate, the fabricators built the roof in Hull and transported it to Suffolk in sections. “It was a nerve-wracking time,” admits Piercy, “But this is when SolidWorks comes into its own. The roof had been designed and fabricated perfectly.”

Constructing the glass skirt between the roof and the existing tower was an equally straightforward process using the original SolidWorks model. “Once again we unfolded the model to create templates for the glazers,” says Piercy. “This could have been an incredibly complex part of the overall build, but because the roof sits parallel to the masonry, the effect is stunning but doesn’t require intricate glazing. This helps to keep costs down without compromising the original design intent.”

For Piercy Conner, and Price & Myers, systems like SolidWorks really do make complex builds possible. “We managed to get this roof fabricated for about ú95,000,” says Piercy. “There is no way we could have done that without the detailed build information that SolidWorks gave us.” The modelling capabilities of SolidWorks also mean that architects such as Piercy and his team don’t have to compromise their original design intent. “For a building to be great it has to retain those essential design elements that the architect first set out to achieve,” he says. “In SolidWorks, we have found a solution that lets us do just that.”

After two years of designing, planning and constructing, the Suffolk Martello tower is nearing completion. The finished roof rises effortlessly, a subtle modern addition to the 200 year-old masonry below. The tower features no other exterior alteration, creating a triumphant blend of conservation and modernisation. With stunning interior, roof terrace, fantastic sea views, 1.5 metre thick walls and canon placement, this Martello tower must be one of the most desirable, and certainly the most fortified, holiday hideaways on the Suffolk coast.