In Amsterdam’s Eastern Docklands, a 3D printing project is underway, using bioplastics and concrete to bring to life a Dutch canal house with a difference

DUS Architects is a multidisciplinary design firm based in the Netherlands, which is aiming to use digital fabrication techniques to create affordable, tailormade architecture. And what better place to put this idea into practice than in the firm’s home town of Amsterdam, a city already known for architectural treasures: windmills, elaborate drawbridges, gabled facades?

In fact, DUS has taken one of Amsterdam’s most iconic designs — that of the traditional canal house — and used it to demonstrate how 3D printing could help the building industry to answer some of its most pressing challenges.

These include a shortage of good quality housing, as well as the widespread standardisation that results in housing stock when building supplies are massproduced. Another issue is pollution generated by the industry, not just from the production of materials, but also their transportation.

The team at DUS believes that 3D printing can help address all these issues – and the 3D Print Canal House project is a major test of that conviction. This initiative kicked off in 2014 on a temporary building site, designed as a growing expo, where the general public could catch an early glimpse of the future of building.

In September 2015, the project moved to a bigger location and became a permanent building project at Asterweg 49, in Amsterdam’s Eastern Docklands district. Construction on the 700 square-metre canal house is expected to begin in the Spring of 2017.

3D printing will play a role in the creation of all building elements used in the final canal house structure. The material used will be a bioplastic developed by Henkel in collaboration with DUS and based on a natural material, linseed.

The main load-bearing structure of the canal house will be built with concrete, produced in unique shapes with the help of 3D-printed moulds that can be recycled, by shredding the material once a mould is finished with and reprinting it as a new mould.

An added benefit of this ‘smart moulding’ system is that individual building components created in this way can incorporate printed areas inside the concrete element, which in turn can accommodate cables, wires and pipes.

Infills such as walls, panelling and flooring, meanwhile, will be created either from full prints or hybrid prints. Hybrid prints are proving particularly useful in areas such as urban outdoor furniture, where bioplastic allows for a unique shape and concrete allows for durability. DUS has used this approach, for example, in outdoor benches printed for its Europe Building, also in Amsterdam, which played host to the EU Presidency during its recent six-month stay in the Netherlands.

Connecting 3D-printed parts to each other will rely on traditional methods (concrete, bolts and so on) or newer approaches currently under development, including new glues and 3D-printed connecting mechanisms that resemble tie-wraps or cable ties.

This range of materials should deliver the flexibility needed to build different shapes and structures in the house, which once complete will include office space, workshop areas for 3D printing, material recycling facilities, hotel rooms, cafes and more.

Building times for individual components vary, depending on size and complexity, from around 20 minutes to produce a tile, to one day for a 5-metre tall element. But the project is not primarily about speed, according to DUS. It’s a chance to experiment and, besides, the firm is working on other buildings and products along the way. The 3D Print Canal House is expected to be completed at some time in 2018. 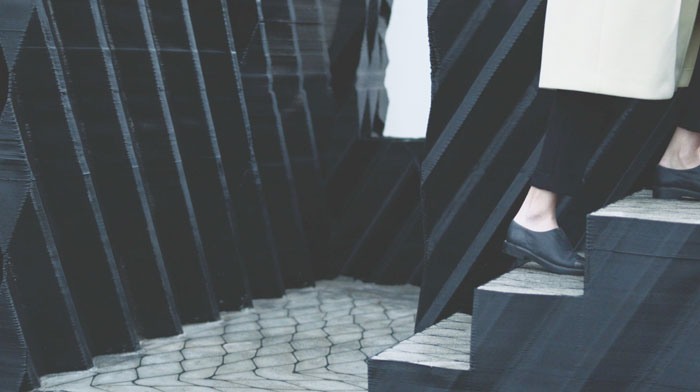 A staircase in the 3D Print Canal House, as seen from the s

The project uses 3D models that typically range from between 20MB and 150MB per print piece – but model sizes for Autodesk Revit projects can weigh in at 500MB and more.

Lenovo’s Flex technology for interconnectivity and network performance, meanwhile, helps to handle GCode files generated by 3D models as they travel over the network from workstation to printer. Network performance is equally critical in handling data flowing the other way, from printer to workstation. This includes printer information, sensor data and images.

As well as using a number of commercially available 3D printers, DUS also created its own 3D printer for rapid prototyping, named the KamerMaker (Dutch for ‘room maker’). This device is capable of 3D printing elements with dimensions up to 2m x 2m x 5m and uses in-house developed software for customisation of printed building products.

The building site of the 3D Print Canal House is currently open to visitors by appointment. In addition, DUS will be hosting several events during 2016 to demonstrate the firm’s use of technology on this project.