Good decision-making depends on everyone working with the best data possible. Rushmoor Borough Council, south-west of London, has done just that by using AutoCAD Map to bring together its design and geographic information.

Access to spatial information is one of the most powerful tools available to town planners, utilities and government. In Rushmoor it is a vital, day to day part of the working of the authority, from those responsible for the upkeep of the councilÝs public buildings, to traffic planners and building control. With around 250 users requiring access to spatial data from several different mapping systems, the call was for a simple, fast way of bringing them together on a single set of information without limiting their ability to carry out their individual roles.

AutoCAD Map 3D is a powerful mapping solution and provides a bridge between CAD and geographic information.

Because of the way that geographical systems had grown within the authority there were a number of different, discrete systems. ESRI ArcSDE was a key part of the authorityÝs strategy, but other parts of the organisation used other software, including AutoCAD Civil. It meant that data could not readily be swapped between departments, and developments in one area need not necessarily be updated in the data sets of other departments.

ýWe hold around 400 active spatial data sets,¯ explained Richard Greaney, GIS officer for Rushmoor Borough Council. ýWe wanted to move to a position where every user could connect to this data, confident they were working with the most accurate, up to date spatial information we possess.¯

It was Autodesk that delivered the solution. AutoCAD Map 3D is a powerful mapping solution in its own right, but it also provides a bridge between CAD and geographic information. By conforming where possible to the evolving Open Geospatial Consortium (OGC) standards it provides a simple and efficient way to share information dynamically, allowing each user to work with the tools that suit them best.

In practice, it means that AutoCAD and ESRI users at Rushmoor Borough Council now share a common data set. Each user maintains access to their preferred tools and way of working, but now they are all working with the same single map information, based on the OS MasterMap for the area.

ýIt was important that we added the new functionality and data into the existing way each user worked,¯ Richard emphasised. ýThe great success of the Autodesk route is that everyone is now using exactly the same system they were before, but with added functionality.¯

This massive benefit to users was delivered without any major upheaval. ýIt was simply a matter of establishing the correct connection to the main GIS datastore, then rolling them out across all the CAD workstations in the council,¯ Richard explained. ýWe took the opportunity to upgrade to AutoCAD Map 3D 2008 at the same time, and the whole rollout went surprisingly smoothly. To access the new, unified data set it is just like opening a folder.¯ How each officer uses the data depends, of course, on the task at hand. The underlying OS MasterMap can be combined with aerial photography, and then the appropriate GIS data added on further layers. That data might be noise contours or monitoring data for environmental health, or it could be road markings or planned new building access for the highways department. CAD and ESRI data work seamlessly together. 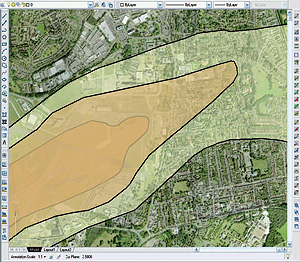 ýThe really key point is that everyone is looking at the same information,¯ said Richard Greaney. ýThis goes a long way to eliminating errors. It is also a big efficiency saving in GIS management: keeping multiple systems up to date meant multiple data loads. Now we just update once ± everyone looks at the same central data.

ýIt has also boosted collaboration,¯ he said. ýPreviously CAD users ± building control, estates and traffic ± were isolated from GIS users. Now they are part of the same user group, and we are actively encouraging them to promote the data they are creating to other users, particularly as they get used to the powerful way that GIS can help them.¯

Implementing this new connectivity, using Autodesk AutoCAD Map as the unifying element to bridge systems, has proved to be a simple yet immensely valuable step for Rushmoor Borough Council. ýIt was generally a trouble-free process ± it felt like a natural progression from where we were,¯ Richard said. ýIt was a lot easier than we expected to achieve connectivity, and already we are seeing increased efficiency for our users and savings in data management time.

ýThis really is just the start for our potential spatial/CAD usage. And most important of all, the users are happy with the set-up ± they see this new approach as a positive step.¯

Forging a connection
Autodesk and the cloud
A level-headed approach to BIM
Collaborating with Revit over WAN
Project: One Blackfriars Road
BE Inspired Netherlands
DJI: the drone ranger
Christmas comes early for users of Unreal Engine as Datasmith made free
Advertisement
Previous Post
Next Post