Autodesk’s One Market headquarters in downtown San Francisco is charged with inspiring innovation. It is used for monthly, themed ‘Design Night’ events and engagement with start-ups and the local community. It also acts as a design gallery for the display of customers’ work.

Outside the Bay City area, and in Europe in particular, however, ‘Autodeskers’ have long complained of a lack of similar outreach facilities. But in October Autodesk capitulated in style, opening a pop-up gallery in the heart of Paris. The free three-week event was held at the Galerie Nikki Diana Marquardt on the edge of Marais.

Autodesk branding was kept to a minimum, alongside a combination of interactive and static displays. The space had a 3D print zone and Fablab, an artist in residence and evening events. It showcased customers’ work in architecture, product design, fashion, automotive, aerospace, 3D printing and laser scanning. Autodesk’s top brass flew in for customer meetings and evening events with talks on a wide variety of design topics.

With over 1,500 visitors in the first four days, Autodesk is considering other pop-up galleries in Germany, Italy and the UK. Local projects were prominently displayed alongside attractions from Pier 9, which is likely to be replicated at future events.

Visitors were given a chance to try out Autodesk’s new 3D printer, Spark, which was designed in the UK and made at Pier 9. Autodesk is using Spark as a testbed for its own 3D printer software development and to promote its brand. It is expected that at some point, fabrication will be moved to a provider with great capacity.

Autodesk gallery showcased a snapshot of innovations currently shaping design from small-scale jewelry to giant infrastructure projects. It was inspiring and educational and, above all, there was no hard sell, which made it a relaxing entry point for industry folk and the public alike. It is a shame the pop-up element means that it will never be in town for long. One wanders what ever next for Autodesk? From this successful gallery outing, I would expect another to pop-up sometime soon.

The first thing attendees saw on entry to the gallery was a highly detailed 3D printed model of the HyperGreen Tower, by Jacques Ferrier Architectures. Standing 246 metres tall, the tower design has a curved, concrete, exterior lattice facade that acts as the building’s primary structural system. The design featured solar cells, wind turbines, a geothermal heating system and a rain water harvesting system. 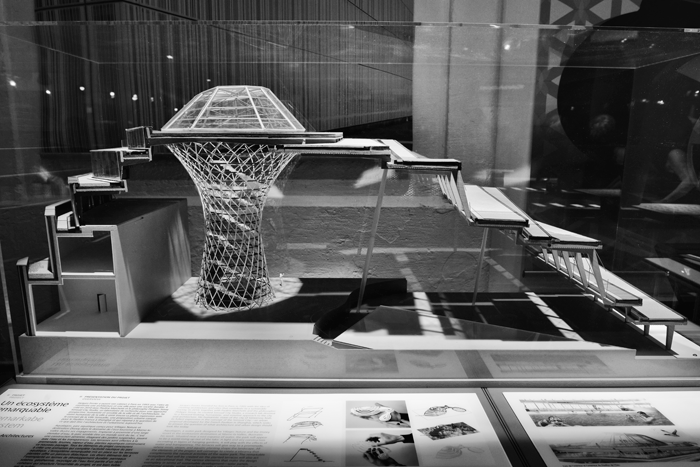 The complex design by Norwegian/US practice Snøhetta was created by cutting huge panels in foam by computer controlled wire. Using these foam patterns as moulds, fibreglass castings were made for façade construction.
These were treated with a special coating and were shipped to site using the foam moulds as protection, resulting in a very light and expressive cladding system. 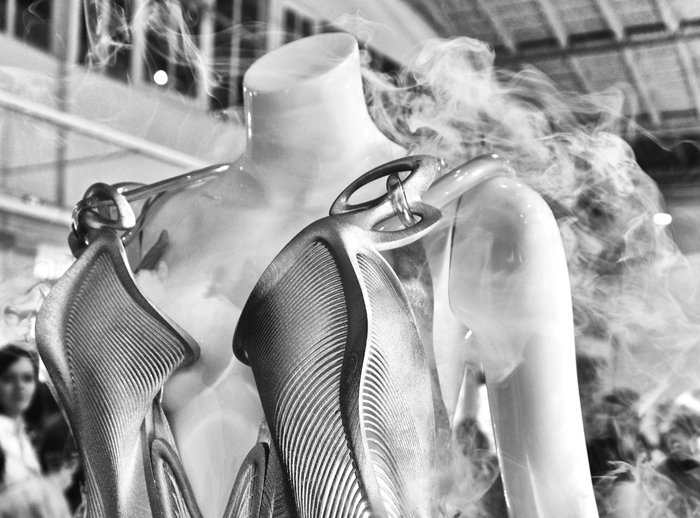 Ms Wipprecht’s 3D printed dress has built-in LED lighting. Should you stand too close to the wearer, the built in sensors trigger the lights to flash, warning the interloper to move away. Should this fail to get a reaction, the dress emits a cloud of dry ice smoke from a necklace/tube. This is either for the wearer to escape into the fog or to irritate the ‘close talker’.

Airbus set out to revolutionise the structural design of aircraft.

The concept plane, beautifully 3D printed and flying over the gallery, has ultra-long slim wings, semi-embedded engines, a U-shaped tail, and lightweight body to improve environmental performance. The bionic structural lattice was optimised by computer to provide the maximum strength for the greatest amount of natural light through a bio-polymer membrane, eliminating the need for windows. Not a design for those who suffer vertigo. 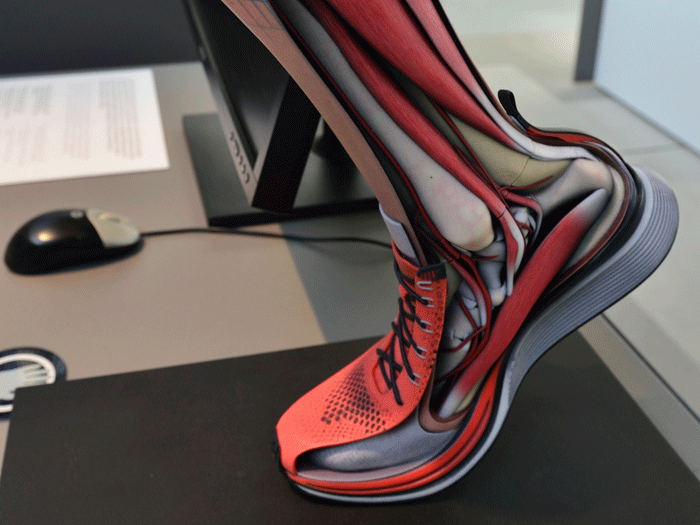 Nike is leading the charge in 3D printing. It has convinced superstar athletes to undergo motion capture in their typical sports. The movement is computerised and simulation and analysis done on the pressure and stresses in their footing. This information is then used to create custom shoes, tuned to the way athletes move.
Nike has also started 3D printing shoes and cleats into the soles of football shoes to get optimum traction on the turf. Using Selective Laser Sintering (SLS) with a proprietary material, Nike has created a fully functional plate and traction system in a fraction of the traditional timeframe and at a fraction of the weight.

One of the more unusual items on display at the gallery was a hacked Makerbot 3D printer that has been reappropriated as a tattoo device. Replacing the extruder head with a needle, the device uses a dismembered fake arm attached with some doodles on it. Apparently the device and concept took just eight hours for students to make and a volunteer has already got ‘inked’ by the machine. 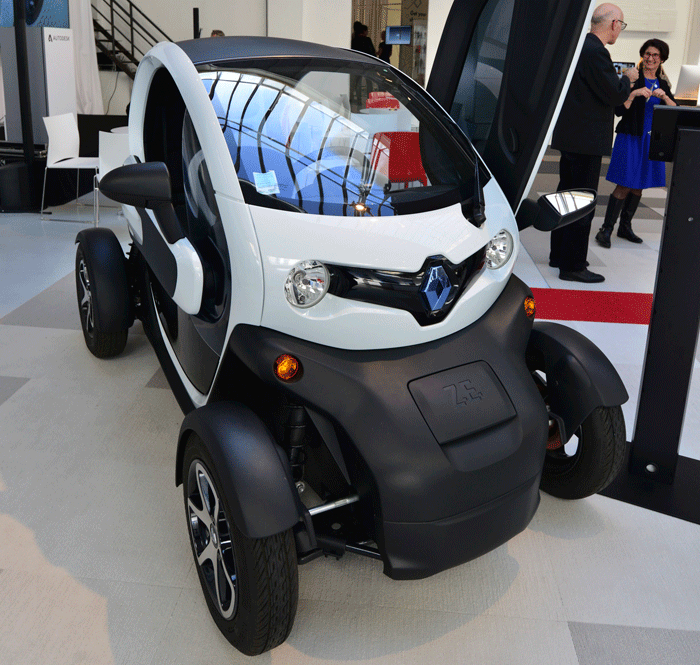 For all who remember Sir Clive Sinclair’s C5, this is probably what it should have been. An electric urban two-seater built for lightness and distance, although I am not sure about the lack of windows in the doors and what that would mean in British weather. 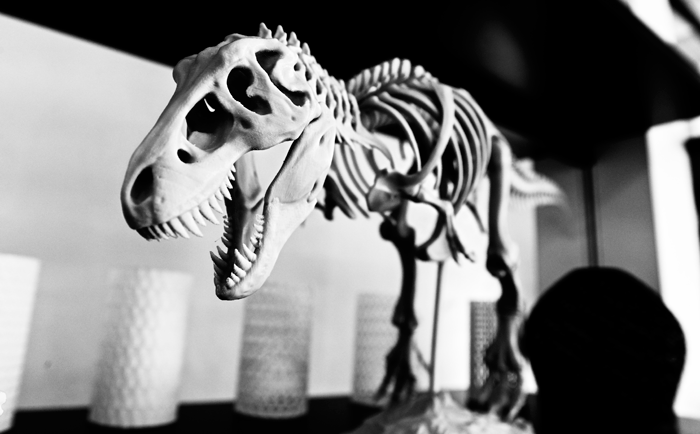 ‘Makers’ Bertier Buyt of leFabShop, and Gary Cige of Usine.io offered advice on 3D printing, fabrication and finding work spaces.
While the noise on the Internet seems to identify the Maker movement as mainly American, it was clear from my visit to Paris that there are many people around the word with the same ambition.
The gallery featured a wall of eight MakerBot Replicator 2, 3D Printers, an Mcor 3D printer and a Roland VersaStudio printer/cutter.
There was a display area for printed parts and some kits for visiting children to assemble. . 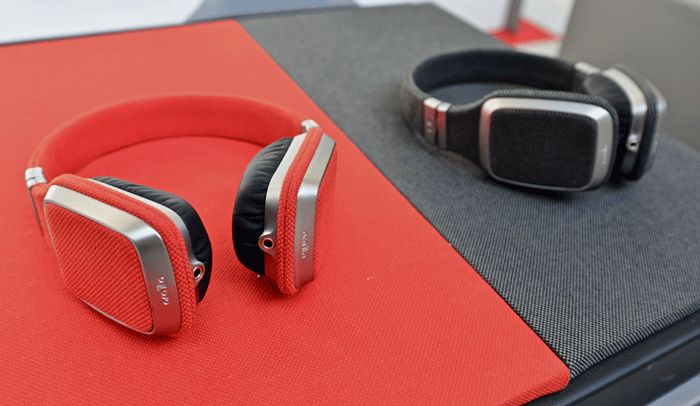 An interactive robot with pen attachment. Through a visual interface users can ‘program the robot’ to draw on wooden squares.
Over time these build up to be complex art patterns. It aims to show that in the future Robots will not always need to be programmed prior to performing tasks.