Already having a mature product in terms of its structural steel modelling capabilities, AceCad is pushing its steel fabrication solution forward by introducing more efficient ways of managing the process from drawing office to site, writes Greg Corke.

Building Information Modelling (BIM), every AEC software marketeerÝs favourite three letter acronym, is starting to gain some real traction in the industry. But when it comes to the structural side of BIM, more often than not, the process stops at the engineer.

When the likes of Autodesk and Bentley talk about structural BIM, itÝs typically about building a 3D structural model, taking it out for round-trip analysis, optimising the design, and then updating the model and automatically generating 2D drawings. But what about the process that follows ± the fabrication of the structure ¾ and the management of that process from drawing office and shop floor to site?

This next stage of the process is what Derby-based structural software developer AceCad Software, is calling Fabrication Information Modelling, or FIM for short. Andrew Manze, AceCadÝs sales director, explains: ýStructural BIM concentrates on the engineerÝs role in the process, but FIM looks at the process from the perspective of the fabricator.

ýFIM takes things further to its conclusion, to site erection ¾ the guy on the shop floor who has bar-coded steelwork and needs to be able to manage the whole production process, or the production manager at a sub contractor who needs to manage all his procurement and supply chain, to order the correct stock and manage that process for each project.¯ 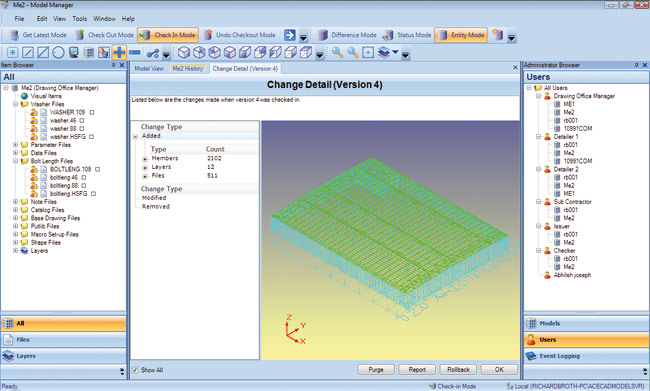 AceCadÝs FIM offering is centred on the companyÝs two flagship products, StruCad and StruM.I.S.NET. StruCad is one of the industryÝs leading 3D structural steel detailing solutions and is built around a powerful parametric engine. StruM.I.S.NET is an information management system, featuring a comprehensive suite of processing, tracking and reporting facilities.

Together they provide steel fabricators with an integrated solution with which to handle everything from modelling, connection design and detailing, through to enquiries and estimating, contract management, material procurement, stock control, and production tracking ¾ all in real time from the moment itÝs been modelled to the moment itÝs been erected on site.

AceCadÝs StruCad lies at the heart of its FIM process and enables fabricators to model entire steelwork structures in 3D ¾ down to the last notch, plate and bolt ¾ then automatically generate drawings, material lists, and CAM data. While this level of modelling/documentation functionality is a given for any steel fabrication solution, AceCadÝs recent development activities have concentrated on making the product much more in tune with the industryÝs changing landscape and global trend to outsource.

Just released this month, StruCad Version 15 includes a brand new Model Management system, which facilitates a controlled multi user environment. This has been developed to enable drawing offices to channel resources so staff can all pitch in and work together effectively on large and urgent jobs, or to enable drawing offices to outsource some of their modelling work overseas ± and most importantly manage that process effectively, in different locations and even in different time zones.

ýWe needed a multi user environment where huge models can be broken down into chunks, but didnÝt want it to be a system where you had to be connected to a network all the time because in the steel fabrication sector a lot of the functions can be distributed over large distances,¯ explains Manze. ýHalf may be modelled in England while the other half modelled in India or China, for example. ItÝs just not practical to run a system thatÝs connected all the time so Model Manager allows users to synchronise the data, over LAN, VPN or Web service.¯

The system works by allowing users to check in/out portions of the model (or a model envelope if the model doesnÝt yet exist) from a central server. Once checked out the 3D data can still be used as a reference by other users; but they canÝt alter the data. 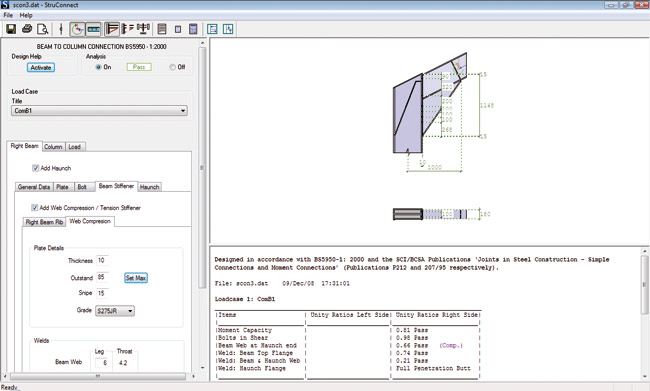 With all this data being pushed around the globe over the Internet one might expect there to be issues with bandwidth. However, according to Manze, it poses no problem and this is down to the wire frame technology that underlies StruCadÝs modelling engine. ýWire technology sends lightweight data, which gets reconstituted into solids, so youÝre talking about tens of MB rather than 100s. Also, once the data has been sent, only the updates need to be checked back in.¯

The management process is controlled at administration level, not only in terms of the area that is assigned to each user, but through the implementation of user levels, restricting exactly what users can do with their assigned areas, down to an individual part level.

Individual drawing office standards can also be managed with the system including material grades and borders, for example. Traditionally, if a contractor had a job on and needed some top-up capacity from a sub-contract drawing office, theyÝd have to provide all this information in a handbook. With the Model Management system, the contractor is able to set up specifications for the job and, if it is sub-contracted, all the standards are pushed down automatically through the system.

The administrator has the ability to look at a history of whatÝs checked in (and out) and who the author is. StruCad provides a complete audit trail of everything that has gone on, right down to whatÝs been issued, including loads and lots. Then, if later on itÝs identified that an error has been made in the modelling process, the whole model can even be rolled back to any point in time.

While StruCad excels in its ability to model, detail and generate NC code and drawings, StruM.I.S .NET takes control of the fabrication process further downstream, managing estimates, contracts, inventory and suppliers, production and budgets. For this latest release the software has been re-written entirely in .NET to facilitate a more flexible, modern and faster platform on which to develop. 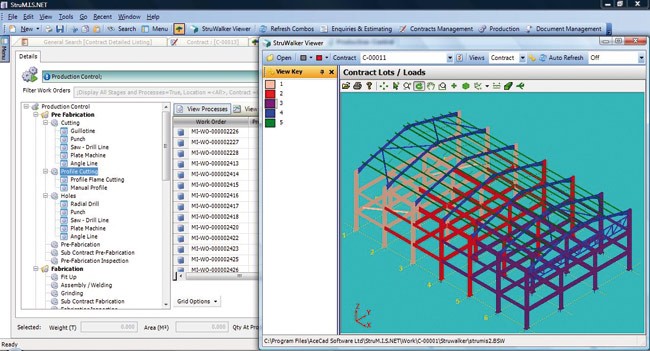 AceCadÝs viewing application, StruWalker, can be used in conjunction with StruM.I.S to provide visual feedback on construction phases and the whereabouts of specific steel members.

Estimating is a bit of a black art, and different fabricators have different ways of dealing with this part of the process. In essence, StruM.I.S .NET is able to manage individual tenders, taking off information from analysis, design and CAD models and supplementing/fine tuning this with material and labour, and additional on-site expenses such as crane hire.

Once a tender has been won, individual contracts can be compiled, based on key information such as material grades, paint specifications, phase, delivery dates, invoice dates, schedule of construction, and even who gets to retain any scrap material.

To help identify specific materials, for example where a mark number appears within StruM.I.S .NET, the associated StruCad drawing can be called upon instantly or its place in the 3D model viewed in StruWalker, an integrated and standalone viewing application from AceCad.

Once all materials have been defined, StruM.I.S .NET can also be used to manage inventory and identify whatÝs in stock and what needs to be ordered. For whatever isnÝt in stock (and isnÝt on order) the software is able to automatically raise a purchase order and even send that data electronically to the supplier.

One of the most powerful capabilities in StruM.I.S .NET is how it manages the production process. Steel can be automatically allocated, routed and tracked around the shop floor as it is cut, drilled, and marked. A number of bar-coding options can also be used so the exact position of each piece of steel can tracked with ease.

Clients can even access live reports over the Internet to keep track of steel, and whether or not itÝs been delivered to site or even constructed. StruWalker can again be used to provide visual feedback on all of this including showing exactly what phase of construction a project has reached at any point in time. This can play a critical role in the decision-making process if last minute changes need to be made as their cost implication can be updated on the fly. 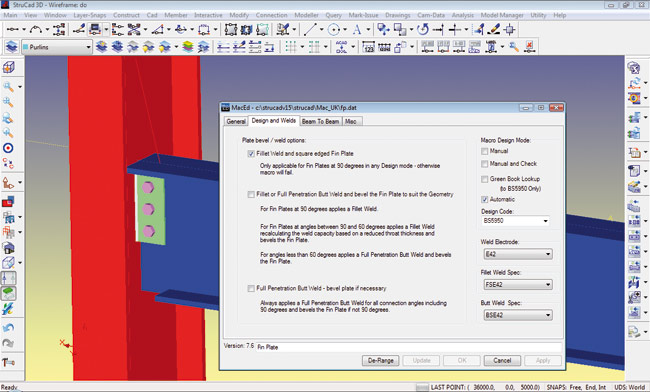 In coining the term Fabrication Information Modelling (FIM), itÝs clear that AceCad is looking to benefit from the success of BIM at the heart of the AEC sector. But marketing hyperbole aside, the FIM acronym actually makes a lot of sense when trying to explain what AceCadÝs StruCad and StruM.I.S .NET products offer the steel fabrication industry.

While Structural BIM concentrates on the engineerÝs role in the process, FIM takes things further to its conclusion, right down to the site erection stage.

While this has been made possible through its StruM.I.S application for some time, the introduction of the Model Manager into StruCad V15 now enables fabricators to manage their extended team much more effectively and get their fabrication modelling and detailing processes even more efficient.

There are other products that do similar things ¾ Tekla Structures and ProSteel on the modelling side, and FabTrol for material management ¾ but AceCAD is the only software developer that has all of this under one roof.

By implementing StruCad and StruM.I.S together it provides greater potential to compress the fabrication process, and introduce material management for procurement much earlier on in the chain. With over 75% of AceCadÝs staff having come from the steel fabrication industry and the companyÝs software technologies honed by its key clients and its own engineering division (which it runs in parallel to its software development team), itÝs a tried and tested process which has already helped the efficient delivery of a wide variety of projects around the globe.