Martyn Day: IES appears to be establishing a track record of getting green building analysis tools to everyone in this industry. Working with Google and supporting SketchUp, which has tens of thousands of professional users, must be an exciting opportunity?
Don McLean: ItÝs very exciting, but I think IÝm long enough in the tooth to know that what I think doesnÝt matter ¾ itÝs what other people think thatÝs important. When you go somewhere and hear other people talking about how excited they are about what you have released, you know youÝve done ok. IÝm really glad people understand the significance of whatÝs happened and what weÝve provided here. IÝm very, very excited about it, and the wider implications of what will happen next.

Martyn Day: It appears that building analysis is moving out from the back room and away from specialists. Do you agree that now anyone with SketchUp can do sustainable design analysis?
Don McLean: We saw to some extent that the tie-in to Revit would give us access to another market. When we first developed our connection to Revit, we concentrated on Revit MEP and a lot of architects asked why we hadnÝt done it for Revit Architecture, as they wanted those tools. Once we did that what we began to find was that there was a great traction in a lot of companies. They told us that the people who really wanted to have access were using SketchUp, and asked why we didnÝt do a version for that application? So we did. 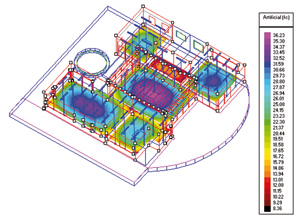 A colourful depiction of the artificial lighting levels within a building under analysis.

Martyn Day: Without any formal training in engineering, are designers really going to understand what the software is telling them?
Don McLean: The free software is very straightforward and easy to use. However, for our professional products, we do a lot of consultancy. We also do a lot of training and weÝre increasingly turning our training and our consultancy into educational messages to try to make designers solve problems in different, sustainable ways.
The trouble is, there are a lot of designers in the industry who are trying to get a handle on all of this, but they are under time constraints. ThereÝs also just so much ÙgreenwashÝ out there at the moment that confusion reigns, and what weÝre trying to do through the consultancy, and particularly the training, is to try to look at different ways of educating people in sustainable design. WeÝve just set up a new course and weÝre actually trying to get it approved by the American Institute of Architecture and also RIIBA, where weÝre trying to teach architects the fundamentals of green building techniques.
IÝm starting to realise that architects know more than they probably realise and itÝs just a question of applying that implicit knowledge with a little bit of additional stuff to help them then begin to pick it up. It requires a little more of a physics background but, really, itÝs just common sense. If you make something hot, it rises; if you make something denser then itÝll heat up. These are little basics, which people do know, but they just donÝt know that they know! We are trying to make sure that architects bring this into their working practices and have tools that they can use quickly to give them results. 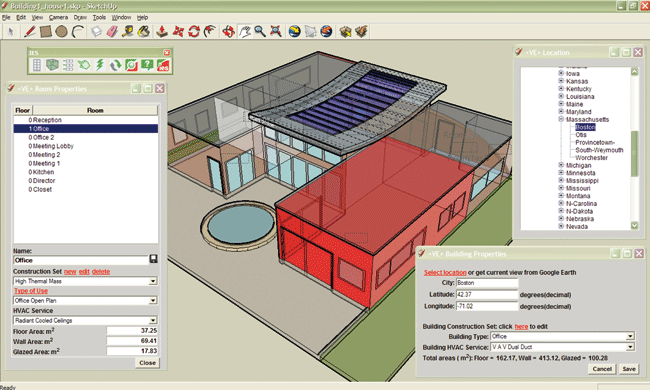 Martyn Day: I guess using the software and experimenting is also a great way to learn?
Don McLean: We have found that people who use our solutions actually become better, quicker because theyÝre trying things out all the time and learning from the results. And once you do this a few times, your ability and understanding increases really quite disproportionately to other ways of learning about sustainable design, like reading a website or something.
Our free tools are part of what we see as important in the educational aspect of sustainability ¾ itÝs to try to get more people able to understand the impact of their design decisions. 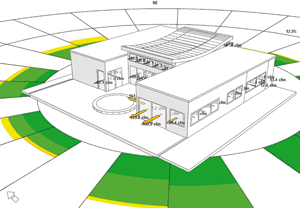 Martyn Day: So what was the original concept around giving away analysis tools?
Don McLean: The idea around our original free product for Revit, launched three or four months ago, was the drive in the States around something called the 2030 challenge (www.architecture2030.org).
America doesnÝt have any building regulations that force sustainable design on architects, itÝs all voluntary. So thereÝs a big movement in America around 2030 challenge, which aims to get all new buildings and major renovations to reduce their fossil-fuel consumption by 50 percent by 2010, incrementally increasing the reduction for new buildings to carbon neutral by 2030.
There are a lot of people signed up to it, but nobody knows how to do it. There are no tools for it. You really need to do analysis, so we provide a tool that is based on our fundamental thermal simulation technology it runs a simulation and gives you three primary bits of information: energy consumption, carbon emission and how the design performs against this 2030 challenge. ThatÝs all it does but itÝs useful.
The way that weÝve made it work is very easy for people to use and see how their designs can be improved. Architects can add and remove components, change the overall construction, materials etc. So for an architect, itÝs not difficult to see what makes carbon output go down; to see that somethingÝs got better. 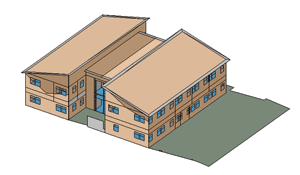 A still from an animation, demonstrating the shadowing cast by an building under analysis.

Martyn Day: Are you frustrated with the industryÝs slow approach to adopting sustainable design?
Don McLean: At the moment climate change is not really affecting people on a day-to-day basis. WeÝre all aware of it but thereÝs no sense of urgency and thatÝs what particularly worries me, especially in the construction industry.
ThereÝs no urgency in that the buildings weÝre putting up right now wonÝt be having a big impact on climate change say in 30, 40, 50, 60 years downstream. And for me, thereÝs an awful lot of emphasis on the wrong kind of areas in terms of sustainability.
I know I say this quite glibly, but you know, people say theyÝre worried about whether they use this kind of material or that kind of material. ThatÝs fine, but it doesnÝt really matter what material you use if youÝre under six metres of water.
So letÝs get the priorities right here. The priority here is reducing carbon and the best way to do that is not by funding lots of wind turbines and things like that, itÝs actually about making us reduce our energy consumption. And in buildings, as we well know, they make such a large proportion ¾ 40 percent of our total energy consumption.
Now IÝm not trying to suggest that we do that tomorrow, but thereÝs so much we could do very quickly and very simply today. We have a number of architects and engineers who are pushing on that front but itÝs to get the mass market to start to do it.
This is where our free tools come in. The only way I can see to start people question what theyÝre doing is to give something away. If itÝs free I have removed one barrier from people at least experimenting. If people find they can save five percent of their energy, theyÝll feel happy and from this we slowly start to build up the momentum.
As itÝs free, I donÝt see any reason why an architect should not now have SketchUp and our free software on their machine to get a quick idea of energy performance in the early stages of the design.

Martyn Day: You donÝt make money from the Revit and SketchUp tools, so whatÝs your business model?
Don McLean: These free tools really excite me. Working with Google and Autodesk has been a big turnaround for us as a relatively small company. However, itÝs not our core business. WeÝve got three levels of software: the freeware; what we call the toolkits, which are predominately aimed at architects that can do things very quickly; and then youÝve got a full software that offers very powerful analysis capabilities, such as Computational Fluid Dynamics (CFD).
Having the three levels of tools means that people can migrate to more detail, should they need it. Even if downloaders of the free tools donÝt want to go to the paid solutions, you can still do good quality sustainable design and we are glad to have chosen to help make sustainable design achievable from that perspective. ThatÝs really what weÝre excited about: getting more and more people get into the concept of sustainable design.