At Isachsen, drones have become one of the most cost-effective tools for surveying projects in fast and non-intrusive ways. Today, the company now conducts regular, often weekly, flights to check that its big projects remain on track

Norwegian construction company Isachsen already owns and operates a fleet of 25 drones and it’s planning to grow that number to 50, putting a drone in the hands of every field operator it employs to map its large construction projects.

In this respect, the $280 million firm, part of BetonmastHæhre, is something of a pioneer. It has already amassed several years of experience in using drones, combined with Pix4D’s drone mapping software, for pre-construction topographic surveys, earthwork calculations and client documentation, among other uses.

These drone technologies (both hardware and software), combined with desktop and cloud processing, enable Isachsen to closely monitor projects, keep track of changes and document them and communicate site status to stakeholders. It is no secret, after all, that unforeseen events and changes of plan on a site often come at considerable cost – and that’s especially true when it comes to the kind of large-scale projects that Isachsen works on, such as roads, tunnels and railways.

Trygve Almquist is a surveyor at Isachsen and also in charge of its drone fleet. His role is to process all the images captured by the company’s field operators, analyse them and then communicate the results, so he is regularly working with Pix4D software to process data. He uses as an example the earthworks for a big tunnel in the mountains in Drammen, Norway, to explain how this combination of drones and Pix4Dbim works for the company. 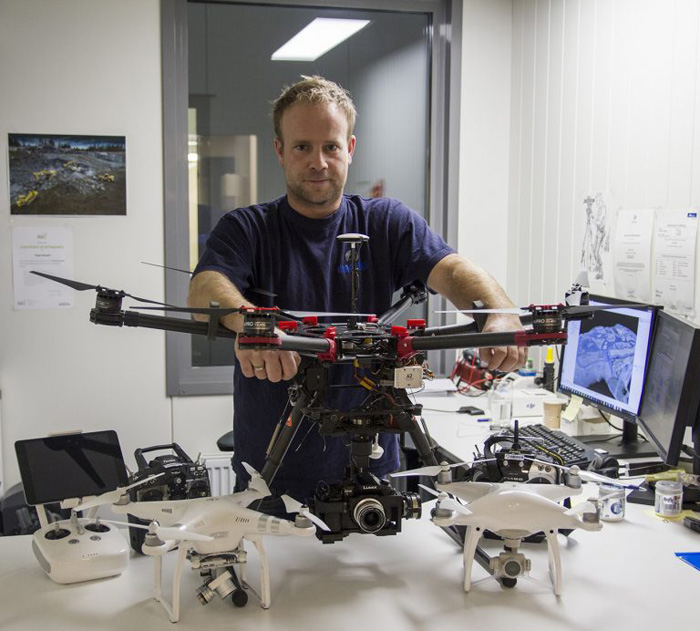 Trygve Almquist, a surveyor at Isachsen, is in charge of the drone fleet

Collecting images from a drone and processing them to create real-time, accurate and measurable 2D and 3D data, such as orthophotos and point clouds, can potentially save thousands of dollars in dirt work on any project of this kind.

In the case of the tunnel project in Drammen, there are three sites to be covered using a DJO Phantom 4 Pro. Ground control points (GCPs) have been distributed permanently over the area of interest and are checked regularly, during flights conducted once a week or at least once a fortnight, in order to get as-built updates. “With this type of site, we need to fly a lot – more often than in mining for instance – because everything changes so quickly on the ground,” says Almquist.

Drones are the aerial eyes of the job site, he explains, helping the company work faster and more productively. Almquist lists some examples of the benefits:

“Getting stockpiles surveyed for volume reconciliations is time-consuming and costly, unless you use a drone to survey your site and drone mapping software to process your data. When surveyors deliver results in a couple of days, drone mapping takes only a few hours. With a drone, we get the big picture of the overall site. We can quickly collect real-time data from projects, to make on-the-ground decisions quicker and identify potential issues before they become costly.”

With Pix4Dbim software, he says, he can choose to process captured images either on the cloud or on the desktop and then upload results from one to the other.

Because he mostly needs 2D orthophoto and 3D point cloud outputs to share with project stakeholders, many of the flights are processed on the cloud only, using Pix4Dbim. It takes Almquist around five to seven minutes to arrange and upload a dataset, he says. Finished results are usually back within one hour and twenty minutes, and he receives an email notification to say they’re ready.

When surveys require more complex measurements and/or higher accuracy, such as cut-and-fill information for earthworks, Almquist uses the Pix4Dbim desktop application to process the data. Processing this way takes a bit longer, but enables him to better control his results, because it offers more advanced editing options and the ability to add ground control points (GCPs). The results are then used to calculate volumes and generate contour maps. 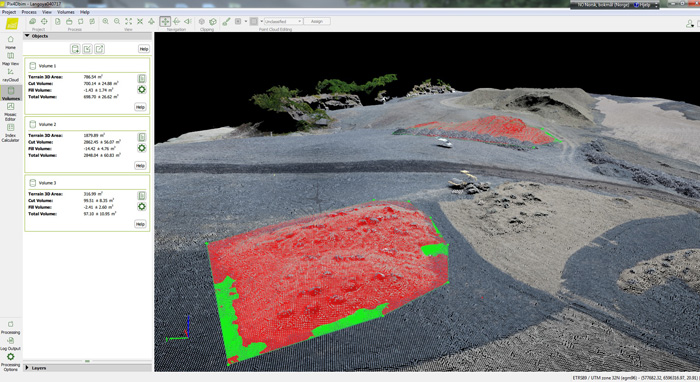 One of the biggest challenges on large construction projects is the sheer number of stakeholders who need to work together and be kept informed about site progress. So Almquist also uses the Pix4Dbim cloud platform to coordinate work between all the project teams, from engineers to field operators. All surveys are available on the platform and stakeholders always know that the dataset from a specific day is available if needed. “If they need a volume calculation, they can call me, I have all the data,” he adds.

By sharing a link to the project, all project members have remote access to the site to visualise and analyse the situation from the drone-generated maps and 3D models.

They are able to extract insight using built-in tools to measure distances and areas, make annotations, follow progress on a timeline and compare the as-built situation with CAD drawings. Deviations can thus be identified more quickly and the team can make faster decisions based on the latest and most accurate facts, rather than guesswork.

Says Almquist: “It definitely enables fast communication between the site and the office. Problems and delays are just avoided. The quality of the 2D orthophoto is very good. The scale is impressively good. The 3D function is also a good addition. We can see the basemap and change its opacity, that’s very useful for comparing the before-and-after situation. The timeline is great. We can go back and forth in time, so we can compare datasets, see the site evolution and better plan the operations.”

He adds that he likes the simplicity of the tools and the user-friendly interface. “That makes it easy to use for people with basic computer knowledge. Everyone can learn how it works in 15 minutes, you don’t need special training to read the results.”

Because Pix4Dbim is used for this kind of collaboration, communication and documentation, it’s done much to smooth out billing and quality control processes, preventing disputes and providing solid evidence of the reasons that changes were made, which were not part of the original project.

Concludes Almquist: “We keep track of what is done and what remains to be done. If there is any disagreement or changes made to the contract, we use those surveys. Those are proofs in case of disputes. Keeping track and documenting through Pix4Dbim cloud potentially saves us thousands of dollars, by proving to our clients the work that’s been done and why it was necessary.”