At the Birmingham Conservatoire, Galliford Try is using Asta Powerproject BIM as its platform for 4D planning in order to orchestrate a polished performance

In a £57 million project for Birmingham City University, construction company Galliford Try is creating the UK’s first new conservatoire since the mid-1980s.

The Birmingham Conservatoire has been designed around multiple performance spaces, to include a 500-seat main concert hall, a 150-seat recital hall and three other venues, as well as teaching facilities.

The project began in August 2015 and is scheduled to compete this coming August, so that the Conservatoire can open for the new 2017/18 academic year in September.

It was designed as a BIM project from the outset. Having always been a believer in quality standards, Galliford Try was among the first wave of contractors to secure its full BIM accreditation.

The project’s BIM model was designed by the architect in Autodesk Revit, into which was incorporated numerous subcontractor programmes. Although it would be up dated regularly, and a comprehensive as-built documentation stack would be compiled by the site team, Galliford Try decided that creating close integration between the model and programme activities would be critical to maintaining control, managing progress, and assuring excellent communications during the project.

The company is a regular user of Asta Powerproject as a planning software platform and adopted the BIM version to deliver that integrated perspective. When the project started, graduate Ibrahim Patel had recently joined the group as a planner, with the new Birmingham Conservatoire as his first project. He was given the task of creating a 4D plan that would give the project team an integrated view of activities and progress of the building in the form of a 3D visualisation. It provided a hub into which all the as-built information marked up on working drawings and documents could be integrated, to maintain a current view of progress. “The 4D BIM model we created in Asta Powerproject BIM gave us a visualisation model alongside our main BIM model,” he explains.

We always have lots of as-built records and drawings on paper. We could now take that information, put it into the 4D BIM model, and gain a 3D representation of that information to see it more clearly. It instantly becomes easier to see both what is planned, and what has happened, in one place.

The visualisation provided an integrated view of progress for the planners, and was made accessible via Microsoft SharePoint to senior management, if they required it. However, it became most valuable when used as the basis for client communication, says Patel.

“The visualisation you create in Asta Powerproject BIM really benefits the client. When they come in for their monthly meeting, we can easily produce a video to show the planned model versus an actual model. That shows them within just a few minutes exactly where the project should be and where it is. Without the video you’d spend lot of time trying to explain where we are and where we should be. With the video, they can see it straight away.”

Subcontractor communication was also a beneficiary, as Patel outlines: “We have progress meetings with individual subcontractors where we pull up the Asta Powerproject programme and go through their works. As well as discussing how far they have come along and anything they are putting in place to get back on track, we can also look ahead. We can re-sequence works to save us time in the future or avoid several contractors working in the same space at the same time,” he says.

The software was used to link as-built information to the visualisation, he continues: “Asta Powerproject BIM gives us a high-level overview of the project. As we get into the nittygritty of activities, we capture information within our as-built documents. For example, for an elevation of brickwork, we have a drawing that is marked up to show the brickwork that has gone up each week, which goes into the as-built document stack. We can take that information and put it into Asta Powerproject BIM, and the model then gives us a visual overview of what has happened too. 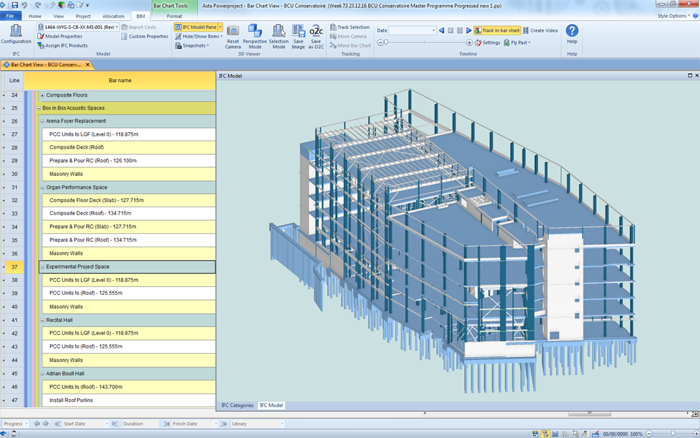 Digital construction technologies are new to some in the construction sector. However, Patel was more than confident about adopting the new software, having recently completed his degree in Architectural Design Technology at Coventry University. He is one of several new entrants bringing in critical digital skills at Galliford Try, and performing important roles as champions of a digital future.

“As a graduate, your eyes have already been opened during your studies as to what technology can do in construction, and how it can move things forward. From my relatively limited experience, I can already see that digital technologies could help transform the speed of information in construction, as well as benefit health and safety and other things. Quite a few graduates are employed at the group, and we are all trying to implement the technologies available. It helps colleagues who are less familiar with technology to see the benefits that are possible.”

That is something that is becoming even clearer as the company also does such things as roll out iPads for on-site use, enabling the company to digitise all the many operational forms required to run the site, perform inspections and write reports.

Patel’s 4D planning work has been such a success that Galliford Try is now working to extend the benefits to another major contract, also in the West Midlands, as it utilises BIM to manage a £40 million contract to deliver a major private rental sector project. This involves delivering 323 apartments, over two high-rise blocks, in the heart of Birmingham.

“[Birmingham Conservatoire] is the first project where we have used 4D planning with Asta Powerproject BIM, so it’s been a big learning curve – but it has not only delivered benefits, but also is a good foundation for potentially stepping into 5D planning later.

“This project was a starting point. Now we’ve seen what it can do, we can roll it out to further projects. Another graduate planner is starting on the next Birmingham project, and I am assisting him where possible in implementing 4D planning.” 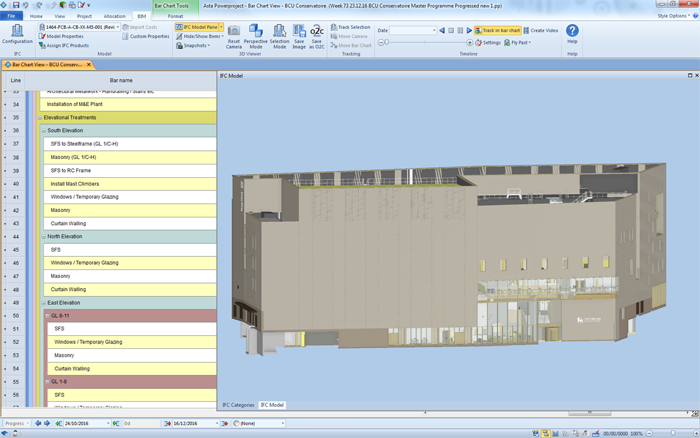 As work continues, it becomes easier to share with subcontractors where the project is and what needs to happen next