The marketing suite for the new Tottenham Hotspur stadium in North London is pushing back boundaries by using the latest VR technology. We speak to Soluis, which helped create the experience for fans and corporate guests.

Scheduled for completion in 2018, the new stadium for London’s Tottenham Hotspur Football Club will be one of the most advanced in the world, with a capacity of 61,000 and a single-tier, home-support stand accommodating 17,000 fans.

As with any modern sporting venue, the stadium will offer an extensive range of premium suites, lounges and pitchside seating to suit all styles, preferences and budgets.

Marketing all these possibilities led to Spurs launching a fully integrated Virtual Reality (VR) marketing suite at its headquarters in North London.

The Spurs Virtual Reality Suite – or ‘SPVRS’, as it has been branded – was devised to showcase the club’s aspirations both on and off the field, utilising the know-how of experienced interactive visualisation firm Soluis.

The company’s first involvement in the project followed an initial batch of early VR work with stadium architect Populous, created to aid the design review process for the stadium. Soon after, the club approached it to explore ways of using a range of interactive platforms to help it market the premium hospitality areas being designed.

“They spent some time reviewing our extensive range of previously delivered leisure and hospitality projects, and were quickly convinced that this would not only help them accelerate the sales cycle, but also help in reinforcing their credentials as a technologically advanced organisation,” explains Soluis CEO Scott Grant.

“The goal was to make visitors to the marketing suite feel valued and generate sufficient impact to ensure a lasting memory of the experience.”

Welcome to the Reality Portal

Soluis worked closely with F3 Architects on the technical aspects of the design for the suite, allowing for a full-size ‘reality portal’ to provide the centrepiece of the installation.

This Reality Portal – a portable, immersive VR dome that can comfortably accommodate a group of standing adults, without the need for headsets – sets the scene with a blend of motion graphics, real-time sequences, computer-generated (CG) animation and booming sound to bring the story to life, raising excitement levels and anticipation.

Further into the experience, VR workstations were arranged in a central viewing area that uses actual stadium seating, allowing users to visualise what sitting inside the new stadium environment will feel like.

As an interesting addition, the entire contents and layout of the SPRVS marketing suite were also prepared as a VR mock-up, to help the football club’s business team to understand the design proposals for the suite.

“High-value people were gathering to discuss a radical new concept with technology that most hadn’t encountered before, so this proved invaluable in accelerating the final stages of the process and allowed some of the later additions to the design to be signed-off notably quicker than previous elements,” says Grant.

Once the project was given the go-ahead, development of the real-time environments began across the both the Reality Portal and Oculus VR stations. The key issues here were getting the most from the assets and guaranteeing their ease of use.

To reduce the need for onsite VR technical experience, Soluis developed a custom software platform to enable all of the different spaces to be accessed via an intuitive touchscreen console. The user interface to this was designed with club sales staff in mind, letting them operate the full system. 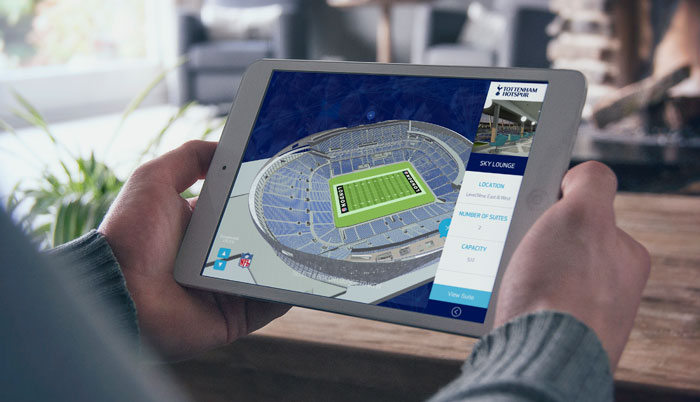 The primary set of apps focused on providing easy access to the interactive stadium model and a complete set of high-quality 360-degree CG views of the premium hospitality spaces.

The versatility of the apps has helped club staff explain much more of the story than a physical model might do, while all staff members are able to carry this capability with them on their own mobile devices.

As a final addition to the suite of apps, an AR photo opportunity was created to enable all visitors to leave the suite with a photo taken of themselves buddying up to a favourite Tottenham Hotspur player or the club’s manager, Mauricio Pochettino.

This involved designing a full-height tracker image to match the style of the suite, and then integrating a range of specially shot green-screen videos to play alongside the visitor in AR.

All the different environments were developed in phases over an 8-month period as various designs were being issued for approval.

Towards the end of this development cycle, it was notable that the visuals created by Soluis for the marketing process were proving extremely useful in finalising key design decisions.

Revit models from both the architect and structural engineer were imported and developed around a largely centralised production pipeline to facilitate creation of CG content and real-time environments.

A degree of optimisation was required to ensure optimal performance of the VR experiences and ensure that visual quality could be maximised for the AR stadium model.

There was a significant amount of effort applied to optimising the stadium model to maintain suitable frame rates in VR, as the ability to smoothly access the associated seating and get a feel for the environment was a key feature for each space.

The design information was delivered in phases for spaces still being finalised, so in some cases, there were existing concept boards and a few reference CG views already produced.

For some of the later spaces, which included some of the larger lounges and restaurants, Soluis worked with the designers to bring the concept to life for the first time in these environments.

Using Unreal Engine as its primary real-time visualisation platform, Soluis has found the software to be an increasingly core element of both its rendering and real-time production pipeline.

“We’ve long held the belief that a centralised approach to visual asset development is a necessity in this age of multi-platform engagement; and this project provided the perfect opportunity to really test ourselves on this belief,” states Grant.

At the flick of a switch, the VR setup can showcase how the stadium will look during different events, such as an NFL game

The latest version of Unreal Engine offered an optimum pipeline to use across the Reality Portal, Oculus Rift headsets and iPad apps.

“We’re always asked if real-time environments will ever match traditional CG production, but we firmly believe that we are there now and that the differences are down to the skill of the artist – and not with any perceived limitations with these platforms.

“You could argue that, on a frame-by-frame basis, an image could still be marginally better than a real-time scene, but in terms of actively visualising space, the real-time experience is many times more effective.”

The other major benefit of this pipeline was that the team could then quickly generate photorealistic environments from the Unreal Engine views, which could then be edited in post-production as standard renders would be.

The system also allowed many individual animation sequences to be created for each suite, lounge or bar, which would otherwise have been extremely prohibitive in terms of costs and time involved.

To dare is to do

“In the past, our team would have perhaps spent a little longer in more familiar 3D platforms before transferring the models into a real-time engine – but with the levels of proficiency we’ve developed over the years, our real-time artists are increasingly capable of processing materials and lighting directly in the engine, which has several benefits,” says Grant.

“The obvious one,” he continues, “is that it saves time in the process and this also has the knock-on effect of ensuring that none of the creative work that goes into elevating the quality of the scene is lost when transferring environments from one format to another.” 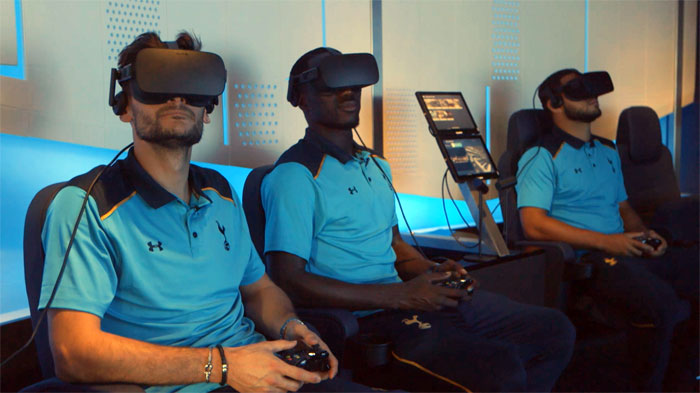 Visitors to the suite – including the team’s own players – have been extremely positive about the experience, as it effectively showcases the ambition and quality of execution to be expected of the new stadium. There’s a video available to view here.

With these results, Soluis sees architectural visualisation evolving from something that people recognise currently as the production of media and imagery for passive viewing, to something that now enables the delivery of genuine ‘memories’ of proposed futures.

“That, for us, is the true purpose of a VR headset, as the visualisation is delivered primarily through the creation of believable real-time environments by talented artists,” says Grant. While some clients might have thought twice about being too adventurous with such a project, Spurs has taken its club motto to heart: To Dare is To Do.