Epic Games is continuing its aggressive push into the AEC sector with the news today that Datasmith, its toolkit for importing and prepping CAD and BIM data for use in Unreal Engine, will now be completely free.

Previously, Datasmith was part of Unreal Studio, which was about to come out of free beta and cost $49/month on subscription. But now it will be a core part of the free Unreal Engine, starting with version 4.24, due for release next month. Other parts of Unreal Studio, including static mesh editing, and the variant manager, which allows users to switch between different configurations at the click of a button, will also be brought into the core engine.

Epic Games has also extended the free availability of Twinmotion, its architect-friendly real time viz tool based on Unreal Engine, that the company previously said would only remain free until November 2019. AEC firms will now be able to download the software for free until the next release, which is anticipated to ship in the first quarter of 2020. Once downloaded, the free version can be used indefinitely.

Marc Petit, the general manager of Unreal Engine’s Enterprise business, told AEC Magazine that there have been 300,000 downloads of Twinmotion in six months, with only a 25% overlap with the 350,000 users that have downloaded Unreal Studio.

Epic Games acquired Twinmotion from Abvent in May 2019 and then promptly gave it away for free. Before then, it cost €1,650 a licence, a price that Petit admits, despite the good download figures, has been a barrier to adoption. “Some people are worried about the price, because it used to be an expensive piece of software,” he says. “[The larger firms] are testing it, but not deploying it en masse.”

But this will change, says Petit. He is keen to stress that when Epic Games starts charging for the software, it will be “considerably cheaper than anything out there.”

“Our commitment is to keep Twinmotion the most accessible and the most affordable visualisation solution,” he says.

Petit did not share prices, but when one considers that real-time viz tool Enscape starts at $469 per year, we imagine it could be as little as a few hundred dollars per year. 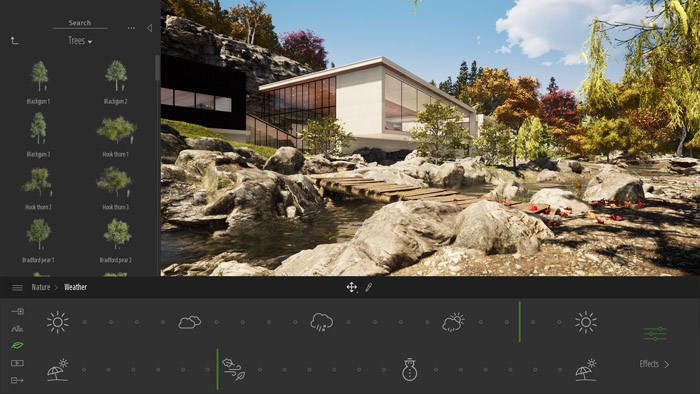 The 2020 version will also bring new functionality to the software. There’ll be a direct link to Rhino and a direct export to Unreal Engine. This is an important piece of the jigsaw as it will give AEC firms a viz workflow from early design validation all the way through to marketing and sales.

Petit did not mention support for Nvidia RTX real time ray tracing, but we know this is on the roadmap and would be surprised if it wasn’t included in the new release.

Epic Games also has some important developments for the core engine. Release 4.24 will add enhanced support for mobile and AR devices. Also, for the first time, users can model inside Unreal. “You can actually create geometry from within the engine, so it makes it a more rounded DCC tool,” says Petit, adding that users will also be able to import point clouds.

The new release will also include visual data prep, which Petit describes as a “kind of completion for Datasmith.”

“You can actually automate the process of converting your CAD, BIM or GIS data into a digital twin,” he says. “All the functions are scriptable and automatable. Of course, you still have to do the recipes yourself, but then the whole process can be automated. And using our visual scripting interface it’s very easy for people.

“For example, you could have all the urinals in the BIM file, and you want to strip them out [to get performance in VR] – all of those processes can now be automated.”

Importantly, all of the functionality within Unreal Engine is available as source code, so third parties can build applications on top of it. Off the record, we’ve heard about some very interesting tools in development.

Epic Games is not stopping with software; it recognises that assets are extremely important to viz workflows. Today, the company has announced the acquisition of Quixel, a Swedish firm that owns Megascans, a huge library of 2D and 3D photogrammetry assets that are used by leading game developers, filmmakers, and visualisation specialists.

“For architecture, it’s a big piece of news because a lot of people were buying Megascans to create nice environments for visualisation,” says Petit. “When you download Unreal Engine 4.24 in December, it’s going to feel like Christmas. Not only you get all of the software for free, but you also get the assets now.”

But will Megascans be available for TwinMotion? “Not yet,” says Petit.

Petit has made the point previously that at Epic Games he is not under the same pressure to make revenue as he was at Autodesk, where he was previously senior VP of Media and Entertainment. With no immediate money set to come in from software sales (with only future revenue planned from Twinmotion) Unreal is betting big on consultancy and training.

Petit sees a very healthy business here, “We’re very happy with that model, so basically the people who want high quality support from us can purchase a support contract, but everybody can actually use the free version.”

In our interview, Petit confirms this was the plan all along, “We threatened to charge for it [Unreal Studio / Datasmith], but we never really meant it,” he says.

But at AEC Magazine we can’t help but wonder if the decision was also influenced by Unity’s renewed focus on the AEC market. Unity owns a rival game engine and is investing very heavily in AEC. It also has a close partnership with Autodesk. It means there is an urgency to seed the market.

Next week at Autodesk University, Unity will almost certainly launch Unity Reflect, which offers a live link to Autodesk Revit and other CAD/BIM applications, including SketchUp and Rhino. The focus is currently on the seamless flow of AEC data, especially metadata, rather than high fidelity visuals, but we are certain the company will be paying close attention to the news coming from Epic Games today.

With growing demand for fast, high-quality real time viz and the need to push out AEC data to multiple devices [AR/VR headsets, tablets and phones], there’s a huge opportunity for the game engine developers. Competition can only be good for the industry as a whole and we’re very excited to see how things play out in 2020.