John Marchant recently visited the site of 5 Churchill place in LondonÝs Doclands to discover how Revit is being used on this latest complex office tower project from HOK architects.

Churchill Place is the new headquarters building of US investment bank Bears Stearns. It was designed by HOK Architects and is currently under construction by Canary Wharf Contractors (CWC). It forms the eastern gateway to Canary Wharf and comprises four buildings. With a floor area of 28,000 m2 net, spread over 14 storeys and with a three-level basement, 5 Churchill Place is a structurally complex office tower adjacent to the global headquarters of Barclays Bank at One Churchill Place.

There were some severe constraints on the design. The site was of irregular shape and built partially over water. The structure is built over an existing 1990s car park and ramps and there were considerable problems to be faced in designing and constructing around these ramps. The building will be predominantly clad in natural stone to its principal elevations but glazed to the north. The shell and core are due to be completed in January 2009 with the fit-out due in May 2009.

Revit was used throughout the design and construction of the project and has been played an instrumental role in delivering the project on time and on budget. ýClearly, there is board level interest in delivering well coordinated projects on time, to budget,¯ says Miles Walker, firmwide CAD Manager at architects HOK. ýOur goals for Revit on this project have surpassed expectationsÍ we will continue to work with Revit (our primary CAD software) to deliver efficient and accurate information, and to provide additional value to our clients worldwide.¯

Curves as a unified whole

There are design precedents for 5 Churchill Place: curves as a unified whole. In 1936, Finnish architect and designer Alvar Aalto created organic glass shapes such as the Aalto Savoy vase, a shape that became a modern icon and a design influence for 5 Churchill Place. Further influences came from the work of Bridget Riley, an English painter and one of the foremost proponents of optical or op-art, art that exploits the fallibility of the human eye. Viewed from the side, the building, according to Miles Walker, is redolent of ýelectric stainless steel bull noses catching the sun and ambient light¯. Viewed from the other direction, Walker detects a ýsense of vertical stone and minimal glass.¯ 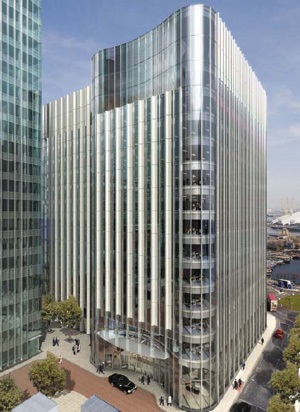 The work of Finnish architect and designer Alvar Aalto, was a major design influence for the organic curved fa?ade of 5 Churchill Place.

The cost of making design changes late on in the design and construction process is much higher than if they are made early on in the process and it is this that the buildingSMART approach concentrates on. The Industry Alliance for Interoperability defines buildingSMART as ýthe dynamic and seamless exchange of accurate, useful information on the built environment among all members of the building community throughout the lifecycle of a facility. HOK has, in effect, planted the BIM seed by adopting the IAIÝs buildingSMART with, according to Walker, ýThe goal to ease work processes and improve interoperability¯ However, itÝs one thing to design a building in 3D. It is another thing to base a whole project on the resultant Building Information Model. Yet that is exactly what has been achieved. Richard Bray, Building Services Coordination Manager for Canary Wharf Contractors, explains, ýThe whole structure has been modelled in Revit and this is the first time that CWC, our architects HOK and our structural engineers WSP Cantor Seinuk have relied on building information modelling in this way.¯

What about the value to construction team and the services contractors? The roof of 5 Churchill Place has been particularly difficult to coordinate because of the use of the top floors as plant rooms. Here, Revit has helped clash detection with the M & E services and made such clashes easy to resolve before construction, cutting sections almost instantaneously, and easily providing schedules. According to James Casson, WSP Cantor Seinuk, ýThere are over 400 construction drawings and a couple of hundred structural drawings and there have been up to ten people working on the same model at the same time. We made sure all our services contractors designed in 3D too and there have been very few problems on site given how complex a job it is.¯ 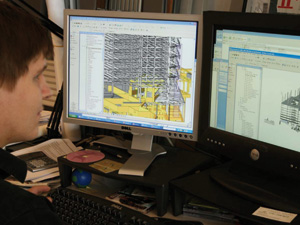 There is a general willingness by all parties to list the benefits. For CWC, Bray comments, ýOver the seven years IÝve been at Canary Wharf, co-ordination was always left for the contractors to do in 2D, so this is a major change. Doing it in 3D does take longer and had we had done it in 2D, the drawings would have been finished earlier. They would, however, not have been correct and there would have been numerous costly and time-consuming clashes to rectify on site. Revit has therefore given us a level of security that we would not have had if we had done it in 2D with problem resolution at the design stage rather than in response to the panic calls from site.¯

According to James Casson, WSP Cantor Seinuk, ýUsing Revit Structure on this project has been positive and it has undoubtedly been a key tool to enable us in a short space of time to meet an extremely fast track construction programme.¯ Terry Crew, Senior CAD Technician at WSP Cantor Seinuk, ýRevit does save CAD resources but it is also about better planning and organisation from the outset. A lot of the time, we used just one person to do the drawings, pulling in others as required. Had we done the project in AutoCAD, weÝd have had several people on the project all the time.¯

Clearly, here is a practice that has made the transition to BIM and has convinced its client, consultants and contractors to do the same. HOKÝs Walker says, ýRevit is our primary CAD system and we are using it on over 100 projects worldwide.¯ He adds, ýWeÝve been fully committed to this for three years now. We are seeing the benefits in the speed of implementing changes and making sure the services fit when construction is under way.¯

There are, however, some special reasons for success. Leadership from a highly competent and persuasive firmwide CAD Manager; board level commitment to and involvement in the buildSMART process; projects with enough at stake to make the effort worthwhile and last but not least significant support from Autodesk across all fronts.

John Marchant is Consulting Editor of AEC Magazine. He also writes case studies for the skilstream partnership, where he is a senior partner.
john.marchant@skilstream.com