Securing the design contract for the National Swimming Centre for the Beijing 2008 Olympics was a task worthy of gold medal distinction. But with the help of MicroStation and Bentley Structural software, Arup and architectural firm PTW of Sydney, Australia, together with CSCEC from Beijing and Shenzhen, beat ten qualifiers for this prestigious, world-class project.

ArupÝs ÙWater CubeÝ design was based on a natural pattern of organic cells and the formation of soap bubbles. Contained within the centreÝs blue bubble walls are the pools for the Olympic swimming and diving competitions, along with seating for 17,000 spectators.

The project had two stages: competition and design. During the competition stage, a large portion of the design was created, but the main task was to develop a method that would enable Arup to produce a 3D model and drawings in the shortest time possible prior to the presentation. During the second stage, Arup incorporated the final features, calculations, and design that would complete the project.

Solution to a daunting proposal

The building structure is a 3D Vierendeel space frame 175 metres on each side and 35 metres high, based on a geometric cell made up of 12 pentagons and two hexagons, which is repeatable in 3D without leaving any empty spaces. Covering this frame are the translucent bubbles, or ETFE pillows.

Using Bentley Structural and MicroStation TriForma, Arup generated a 3D array of the cell, rotated it about two axes, and then sculpted the building. The cut surface planes of the remaining elements form the flanges of the composite structure, while the internal elements form the webs. 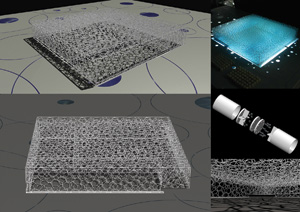 Arup generated a variety of renderings from its 3D model of the National Swimming Centre. (Image courtesy Arup-PTW-CSEC)
Advertisement
Advertisement

Stuart Bull, Arup senior 3D technician, described the modelling and documentation process as a ýdaunting proposal¯. Arup created a 3D centreline wire-frame and exported it to a structural analysis program for engineering. The analysed model was output to a text file containing geometric and structural member design data.

Next, Arup wrote a MicroStation VBA routine that used the text file to create a complete 3D model of the steel structure. By enabling MicroStation Development Language (MDL) functions, the model could be created as surfaces, solids, or structural elements as appropriate.

ýThe ability to use the VBA scripts to create our geometry, which gave us the link from the engineering and analysis model to our working 3D CAD model, was very important,¯ Bull said. With more than 22,000 beams and 12,000 nodes in the structure, the automation by the VBA routine saved Arup months of manual 3D modelling. As part of the competition, Arup, PTW, and CSCEC also had to provide a physical model of its design. This was done by saving a copy of the 3D structural model as a stereolithography (STL) file to create a rapid prototype model.

The physical model was created from a process called SLA, in which liquid epoxy resin is solidified by a laser following the STL file information to make a semi-transparent plastic. This model was presented in the final competition stages.

Although the project wasnÝt scheduled for completion until 2006, ArupÝs design and documentation input ended in the summer of 2004. As Arup looks down the road to other projects, Bull reflects on what made the Beijing Swimming Centre project a success.

ýBentley StructuralÝs capabilities, such as automatic drawing extraction, dramatically reduced the time needed to produce 2D documentation. Since we didnÝt have to worry about that part of our workload, we could focus on the 3D model,¯ he said. ýAnd using a MicroStation VBA routine to automatically model the structure saved us quite a bit of time.

ýAlso, being able to save files in other formats let us quickly issue drawings to clients and consultants in the formats they needed. Yet we didnÝt have to give up the enhanced capabilities that Bentley solutions offer us,¯ Bull said.

ýThat was quite important. If we had been using any other software package, itÝs unlikely we could have produced such complicated geometry and documentation, and integrated it with structural analysis, especially in the timeframe available.¯