Rising more than 80 metres from the ground, the roof of the Singapore Sports Hub is the world’s largest freespanning dome structure. Here’s how an integrated architectural and structural design approach helped make this ambitious project a reality

Arup’s innovative design for the Singapore Sports Hub, a 55,000-seat national stadium, is a model for future sustainable stadium design, according to the company. The firm was appointed off the back of its track record in creating the Beijing National Stadium, the Allianz Arena in Munich and the UK’s City of Manchester Stadium, as part of the greater Marina Bay Masterplan to reposition Singapore as a great place to work, live and play.

The result was the largest sports infrastructure public/private partnership in the world and, from the outset, achieving spectator comfort in a tropical climate was a key priority. Arup designed an ultra-thin dome roof structure with a movable roof that extends over the pitch.

This design not only provides shade during events, but also an energy-efficient cooling system that reaches every seat in the stadium, without compromising on the proximity and quality of view for spectators attending everything from sporting events to Singapore’s National Day Parade.

Spanning three football pitches and rising more than 80 metres from the ground, the Singapore Sports Hub roof was constructed from a series of 3D triangular trusses. Fabricated from circular hollow sections, the architecturally appealing curved lines have been exposed in the roof’s structure. These curved lines posed many challenges to the fabricator; however, these were overcome through the use of Tekla software from Trimble.

The Arup sports venue team used Tekla to optimise the fixed and movable roof design, resulting in an efficient, lightweight and sophisticated form. It recognised from the start that a fully integrated approach to the architectural and structural design would be needed, with a strong emphasis on collaborative design. This, it was hoped, would deliver peace of mind to the architects, main contractors and end users involved, by offering reassurance that the design and products specified weren’t just fit for the job and compliant with various building standards, but also mitigated against the risk of unnecessary costs and disruptions further down the line.

By using specialised, in-house analysis software that was integrated with Tekla BIM through a plug-in, the Arup design team was able to update the Tekla 3D model automatically to match the latest version of the design geometry – something that might not have been possible using traditional solutions.

Sharing model data throughout this project was central to its success, so that all parties could collaborate on building services, the concrete structure work and architecture. Arup was able to catch potential clashes between building services and building structure early and rectify its design. For example, approximately 42km of precast terrace seating had to fit together perfectly with building services such as HVAC.

“For this steel project, it was critical that we used Tekla software, because it was part of the design tool to develop the geometry and efficiencies of the roof structure,” says Mike King, a principal at Arup’s Singapore office and structural leader of the Sports Hub project.

As the 3D model by Arup defined the geometry and member sizes of the roof structure, it was important to ensure that all connection design information was properly imported into the base model.

And in order to ensure that the design team’s intentions were fully reflected in the Tekla model, representatives of Yongnam, the steel contractor in the project, developed a system that checked all the essential data in this model against the design data for each and every intersecting node.

It was also used by the cladding contractors to develop an installation plan and to ensure that their systems fitted within the structure. 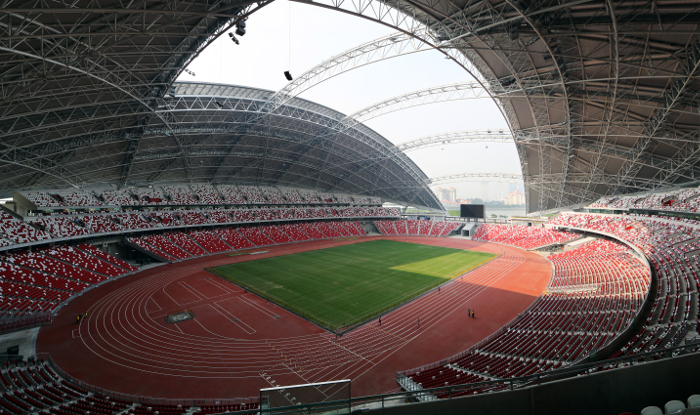 The design of the dome roof structure delivers shade and energy-efficient cooling to 55,000 spectator seats

One of the key challenges of the Sports Hub project was keeping the roof structure’s weight as low as possible, not just to reduce costs but also the project’s carbon footprint. The biggest load on a roof like this tends to be the weight of the steel structure itself – and this was minimised by a process of fine-tuning the design.

“We like Tekla software for these types of structures, as it is a solution that steel fabricators are comfortable using and have confidence in,” says Mike King. “Therefore, we knew that if we did our documentation using Tekla, we could hand that model over to any steel fabricator in the world and they would be able to utilise it to develop their own fabrication model, which ultimately saves time.”

And as well as saving time, using a model-based approach for this project enabled Arup to achieve resource efficiencies and, in particular, a reduction in the quantities of steel needed — a more intelligent way of working for everyone involved.