Greg Corke reports on proceedings at Trimble’s ‘People Count’ event, where the emphasis was firmly on human behaviour, rather than technology

Many BIM conferences get bogged down in the technical detail of COBie data drops, PAS 1192 and Common Data Environments (CDE). These are all important, of course, but it is refreshing to attend an event where technology and standards play second fiddle to the people element of BIM.

It’s widely acknowledged that the construction industry needs to change, but Trimble’s event, ‘People Count: The Culture of Digital Construction’, which took place in Coventry in December 2016, gave attendees some real food for thought on the topic of how teams can better collaborate by changing the way they work.

The psychology of collaboration

Jason Underwood from the University of Salford provided insight into how to change perceived norms in our industry. Underwood is a professor in BIM and construction ICT and programme director of the University’s Master’s degree in BIM & integrated design, but he also has a Master’s degree in psychology, which has helped him understand human behaviours and how we become more collaborative. 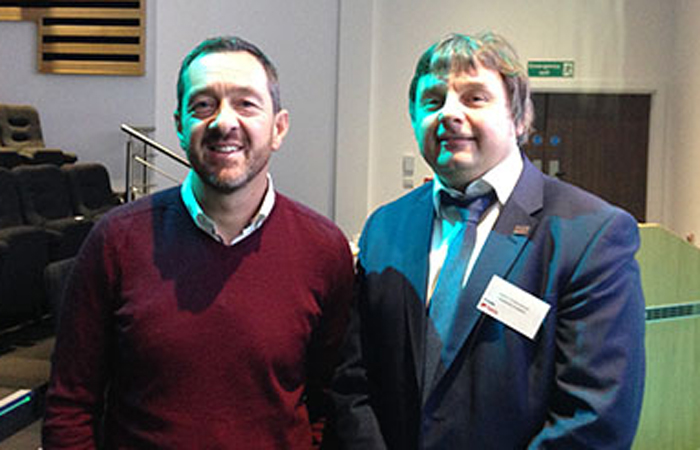 Olympic cyclist and bike designer Chris Boardman MBE gave a keynote on the psychology of winning, pictured left alongside Jason Underwood from the University of Salford

“In terms of BIM, digital construction, whatever you want to call it, for me, about 10% to 20% is about technology,” he said. “Process is important – we’re getting better about that. But 80% to 90% is about sociology. Understanding how people behave. Why do they behave like that? And then working with them to develop them.”

Underwood explained the importance of aligning our individual goals with the shared goals of the team, and why our social heritage makes it so hard to change. True collaboration, he said, is when there is a real willingness to work together for the common good – not because someone has told you to.

Underwood believes one of the big problems with the construction industry is that it is built upon adversarial relationships. The key to changing this is building trust between individuals. “As we are, because we don’t trust each other, we don’t trust each other’s information,” he said. “We’re constantly looking back to cover our backsides. We can’t look forward. We can’t be innovative and we’re not an innovative industry.” Underwood believes education can play a big role in changing this, particularly in its ability to break down identities.

Underwood, whose first degree was in civil engineering, admitted that he left his four-year course with blinkered views about architects. “I’m a civil engineer, me,” he joked. “We make it stand up. You’re an architect. You just make it look pretty. We do the real work. Actually, collectively, we add value to the built environment.”

With this model, Underwood believes graduates might leave university with a more united perspective. “That’s breaking identities down – you’re a built environment professional with a specialism, not a civil engineer or an architect.”

Underwood shared an interesting slide with the audience, which showed research by Barclays into political, technological, cultural and societal influences on different generations – the so-called digital natives versus the digital immigrants.

The research showed that while digital natives (people born after 1985 and sometimes called ‘millennials’) are incredibly tech savvy (and, by implication, wellplaced to drive innovation in construction through new technologies), they are often not as adept at building relationships and understanding the value of relationships as their ‘digital immigrant’ elders.

Communicating face-to-face, the preferred method of the maturists (those born pre-1945) and baby boomers (those born between 1945 and 1960), is very different to communicating through social media. And, as the distributed Generation X (1961 to 1980) staff of this magazine know, the catalyst for change in any company is when people get together in the same room.

“We have to develop their interpersonal skills to be able to collaborate to understand the world from a different perspective, to be able to build relationships.

“A lot of universities now do multi-disciplinary projects. But what do they get measured on? What do they get assessed on? The output, the 3D model, the cost estimate,” he says. “What we don’t do, or we do very little on, is reflect on the process, reflect on the dynamics that went on there. Were there any adversarial behaviours in there? Why do you think that happened and how did you resolve it?”

Jason Hyde of Mott MacDonald is one millennial who is driving change and advancing collaboration through better application of technology.

The civils designer, who is working on an AECOM-Mott MacDonald Joint Venture (JV) project, the Ordsall Chord, joined with AECOM colleague Jagvinder Singh to give a talk on collaboration. This presented the challenges and benefits of delivering one part of a project without producing any 2D drawings.

The Ordsall Chord is a rail track project that will create a link between Manchester city centre’s main train stations for the first time. It includes new bridge structures and the widening of an existing viaduct.

The project is part of Network Rail’s £1bn-plus rail upgrade plan for the North of England. It is being undertaken by the Northern Hub Alliance, where Network Rail (the owner-participant) and other partners work in a single team, collaboratively and without organisational barriers. Importantly, explained Hyde, the Alliance operates on a no-dispute, shared-risk basis.

Hyde explained that one of the key tenets of the Alliance is that the best people must be used in key roles, regardless of their employer.

“We’ll do the design and the calculations but we’ll get Severfield to produce the model and drawings,” said Hyde. “Because they are quite clearly fastest at doing it, they’re going to be cheaper at doing it and they are going to do a better job.”

Severfield’s detailers were brought to AECOM-Mott MacDonald’s offices and embedded within the design team. “We retain all responsibility for the model – that’s quite important. It is an AECOMMott MacDonald model,” says Hyde. 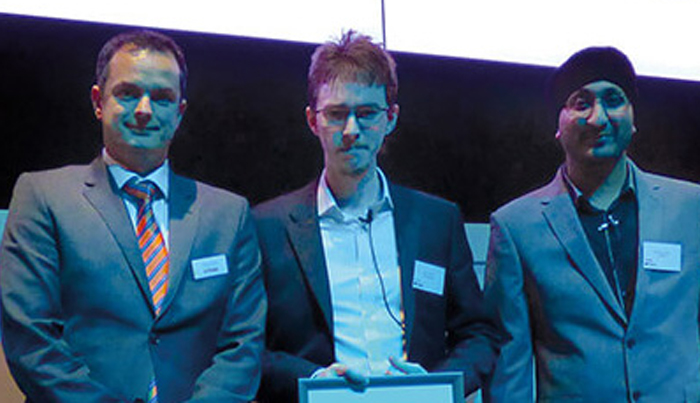 In addition to modelling speed and efficiency, Severfield’s upfront involvement and the inherent trust it established in the model meant there was no need to have separate design and fabrication models. A combined model was used to produce both the designer’s drawings and the fabrication drawings.

One of the most interesting aspects of Hyde’s story involved the process whereby Severfield was chosen as the steelwork fabricator, through a series of behavioural workshops, in which the Severfield team really stood out from the competition at the tender stage.

They demonstrated a willingness and capacity to challenge conventional working methods, as Hyde explains. “They produced good quality but, more importantly, the way they behaved and interacted with both the design team and the wider Alliance was the thing that won them the job.”

Encouraged by this progressive way of working, Hyde wanted to take an even bigger step forward for another part of the project, a footbridge over the River Irwell. To this end, he proposed to get rid of 2D drawings altogether, managing design and fabrication through a single 3D model.

“I got a lot of looks when I suggested this in the office,” says Hyde. “Quite a few people were not happy about this. How do we approve the model without a drawing? How are we going to sign this off ?”

With some gentle persuasion and the promise that, if everyone was not happy, they could fall back on traditional processes, Hyde managed to overcome initial resistance. He got all parties – designer, checker, fabricator, construction team and approval team – to come together in one room for sign-off.

“We turned that approval process from one person signing it off, to eight people representing the main body of the Alliance signing it off and collectively saying, ‘Yes, this is the way forward.’ We gave access to calculation files and live access to models.

“It took us five and a half hours to get through it, but we came out with an approved model. The whole design taken to approval, issued straight to fabrication as one model, no drawings. Just one piece of paper with a signature on it,” said Hyde proudly. “If we could have convinced them to do the signatures electronically, I would have left with an even bigger smile on my face.

“In that one meeting, we took a fourweek approval programme down to 5.5 hours. That is a massive time saving,” he says, adding that it also significantly reduced the number of change orders.

The overall benefits have been huge, as Hyde explained. “We’ve transferred 100% of the knowledge from the design team to the fabrication team by having them as part of our team,” adding that there have been £10k of savings by not doing drawings for the footbridge.

The fabricator also believes he saved 50% of his time in the programme by transferring it this way and not having drawings. The site team also benefited, by enhancing its knowledge through providing models and encouraging the use of viewing software on site.

Hyde is realistic about how this collaborative model-based approach might be applied to other projects, explaining that the footbridge was a relatively simple project. “We’re hoping to do this a bit more, but we are also very aware that this doesn’t apply in every situation. We could not follow this example with the other bridge. It was too complicated,” he says.

Trimble’s conference also featured some other notable presentations. David Lash, product manager in the structures division at Trimble, shared some interesting facts on RFIs (Requests for Information). These included the average number of RFIs per project (796), and the average time before a submitted RFI receives its first response (eight days). All of this leads to delays and adds cost but, as Lash pointed out, most engineers do not know how much profit they lose because of RFIs.

Lash explained that the number of RFIs in a project can be significantly reduced by introducing a structured approach to LoD (Level of Definition). Everyone needs to buy into this and it needs to be clear what information needs to be delivered by certain dates in the project. Everyone then needs to work off the same schedule, he said. It is important that all parties know how reliable the information is within any given model.

LoD, as defined by stage three of the digital plan of works (DPoW), in particular, can help avoid RFIs. Clients need to ask for this and not just request that a project is delivered in a specific file format.

Of course, using software that is capable of delivering a model to the required LoDs is important. Here, Lash pointed out, Tekla Structures scores highly. He added that Tekla Structures has built-in tools to allow users to check the LoD within a model. It’s also possible to run similar reports on Revit models, he said.

But as Trimble acknowledged ahead of the ‘People Count’ event, “we can provide you with some of the best software in the world, but it is people who make the difference and the way we work together will enable our industry to progress.” In this respect, the event did a good job of delivering on its promise.