At the point where HS2’s main line from London branches out to Birmingham and Leeds, Ineco used software from Bentley Systems to design and document the optimal track alignment for trains to pass each other safely, even at high speeds

From a technical point of view, the Birmingham Delta Junction is the most complex corridor of the first phase of building HS2

The design of the Birmingham Delta Junction was always likely to be one of the most complex aspects of the ambitious and often controversial project to build the UK’s High Speed Two (HS2) railway line.

The junction, after all, marks the spot where the main line co-exists with branches to Birmingham and Leeds. It’s a place characterised by many intersections and where trains will race past each other at maximum speeds of 400kph and commercial speeds of 350kph, points out Fernando Tejedor, senior project manager and railway team leader at Ineco, the transport engineering and consultancy company contracted to work on HS2.

It’s also a vital element of one of the UK’s most high-profile infrastructure projects, which its proponents claim will offer passengers more seating capacity and 50% shorter journey times between cities, as well as new jobs and regeneration opportunities across the UK.

In order to model the terrain of the Birmingham Delta Junction, design the optimal track alignment and generate the required documentation for this project, Ineco turned to software from Bentley Systems. At the same time, the company was looking to help a geographically dispersed design team collaborate and meet a challenging six-month deadline.

“From a technical point of view, the Birmingham Delta Junction is the most complex corridor of the first phase of HS2,” says Tejedor. This first phase involves the development of the London-Birmingham Connection. A second phase will focus on further connections to Manchester and Leeds, while a third will provide connections to Glasgow and Edinburgh.

For a start, there were 21 points of conflict with associated infrastructure to take into account, including five motorway crossings, various high-voltage power lines, river and canal crossings, plus minor roads and an existing, conventional railway line.

Plus, there was the safety aspect to consider. Says Tejedor: “These connections produce a very complex operation scheme, allowing the movement of trains in all possible directions every three minutes – and at 400kph – without interfering with each other.”

In response, Ineco conducted two studies with a view to developing innovations that were seen as potentially critical to supporting high speeds on the new railway. The first focused on the design of a rail turnout and the second on the design of a ballast section.

This work involved Ineco experts based in London, Madrid and Seville, as well as some in Wales. “One of the biggest challenges facing the project team was coordinating the various working groups and enabling them to share data and collaborate efficiently while working remotely,” says Tejedor.

“This required an engineering information management system and environment that could ensure that each team member, regardless of where they sat in the world, was able to access the latest version of the data, as well as templates to enable design standardisation and related applications.”

MicroStation was used by Ineco for information modelling, generation and manipulation of graphics, plus the creation of guidelines for developing route alignment options. This allowed engineers to “create terrain models from LiDAR information provided from 94 flights at a 20cm precision”, according to Francisco Luque, a civil engineer and alignment designer at Ineco.

Following horizontal and vertical alignment design according to HS2’s standards, Ineco designed and located turnouts using Bentley Rail Track’s switch placement feature. Where standard switches did not meet the 230kph design criteria for the junction, they used the feature’s Turnout Generator. Multiple templates were then developed to streamline and standardise the design of the railway formation, so designers could handle complex sections that included retaining walls, platform junctions, culverts, catenary masts and sleepers.

“Using Bentley software and the common data environment it provides meant we could easily incorporate 3D models for all the different technical disciplines involved, consider environmental factors for the project and ensure that data from other sources was handled with ease,” says Luque.

The outputs of this design and information modelling process included plans, profiles, cross sections and 3D views. The visualisation capabilities offered by MicroStation and Bentley Rail Track made it easy for Ineco to communicate the design to all stakeholders; for example, they could provide a realistic visualisation that demonstrated clearly how the design would integrate with the existing physical environment at various intersecting points. 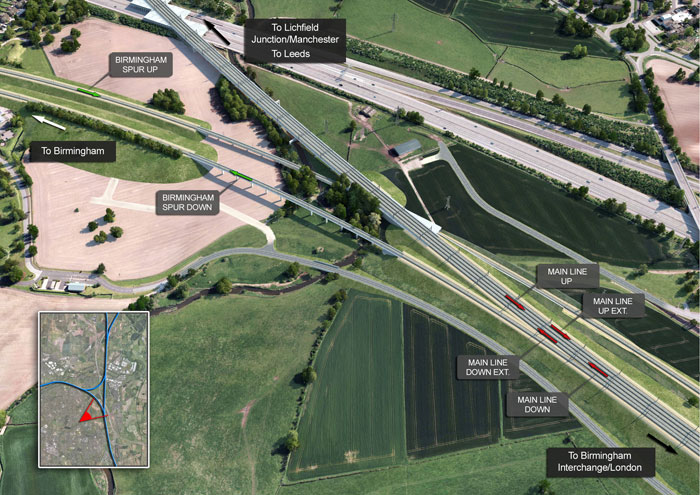 “Efficiency gains were significant and we were able to reduce the amount of resources used on the project by up to 30 percent,” says Tejedor.

ProjectWise also played a vital role in helping team members to manage documentation generated by both HS2 and its own consultants, while its delta file transfer functionality meant that information could be exchanged quickly and securely.

“It was a magnificent tool for sharing and exchanging files,” reflects Pablo Ramos, Ineco’s UK country manager. “The integration of ProjectWise and Bentley Rail Track enabled [us] to easily deploy project preferences across the distributed team, ensure engineers and designers adhered consistently to standards across all offices and delivery the same high standards of quality demanded by the client.”