The 168 metre tall observation wheel, aptly named “High Roller”, is the focal point of The LINQ, a new quarter-mile open-air shopping, dining, and entertainment district on the Las Vegas, Nevada, Strip. Featuring 28 spherical cabins supported by a circular wheel rim, the ride creates an immersive audio, video, and lighting experience while providing dizzying views of the city for up to 1,120 people each turn.

Arup served as engineer of record as part of the project team commissioned by Caesars Entertainment Corporation to develop the US$550 million district. The firm performed structural, geotechnical, mechanical, and electrical engineering, as well as acoustics and fire safety consulting for the observation wheel, which sits opposite Caesars Palace.

As the primary building information modelling (BIM) software used by the team, Bentley’s Structural Modeler enabled the seamless integration with other applications that was instrumental in 3D co-ordination and delivery of the project.

When it opened to the public in March 2014, the High Roller fulfilled the client’s goal of becoming the tallest observation wheel in the world, surpassing the London Eye and the Singapore Flyer. The 161-metre-diameter wheel will rotate as many as 650,000 times before it has outlived its 50-year design life. 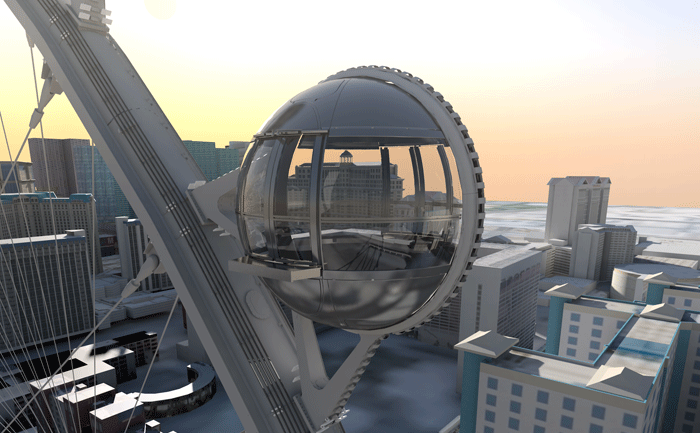 The structure was designed to resist fatigue and withstand concentrated stress on bearings, steelwork, cables and fittings associated with turning 28 cabins, each weighing 44,000 pounds plus occupant load for the duration of the 30-minute ride.

To maximise sight lines from within the cabins, the rim element and visible support structure had to be minimised. As a result, the wheel is constructed with tensioned spokes and a unique single rim that is kept in compression. Numerous detailed stress analyses were conducted to optimise attachments to the rim required for power, communication, lighting and safety. All elements and supporting brackets were modelled in Bentley’s Structural Modeler prior to shop drawing production.

The narrow footprint of the site presented a number of challenges for the design team. The High Roller is situated over an existing road adjacent to a monorail, so the potential locations for the support legs were limited. After extensive design studies, Arup determined that the best approach was to support the hub of the wheel using four inclined legs each 2.8 metres in diameter, with a single transverse brace founded across the road. The support legs are inclined to provide enough width such that the cables of the wheel serve as an efficient lateral system while minimising the structure’s footprint.

Wind tunnel tests were performed to predict wind-induced motion and damping requirements. Consequently, the support legs contain a total of thirteen tuned mass dampers to arrest vibrations that might negatively impact the ride experience for passengers.

Passengers experience a floating sensation as the wheel rotates. The spherical cabin shape presented an architecturally arresting design and, at the same time, provided spacious interiors and unobstructed panoramic views. The cabins also presented a climate control challenge to prevent the desert temperatures and solar gain from creating a hot-box environment. Arup’s engineers optimised the design of the cabin air-conditioning and glazing, so the spherical panels are double glazed to limit the air-conditioner power demands.

Arup overcame these design challenges by using a number of software packages, and selecting each application to fulfill a specific purpose. At the early stages of design, McNeel’s Rhinoceros freeform modelling software was chosen to provide quick and accurate conceptual modelling. GSA Suite, a structural design and analysis package by Oasys (Arup’s software house), was selected for early analysis of simplified beam-element models.

When a highly sophisticated BIM application was required, Arup chose Bentley’s Structural Modeler. Other programs were applied as the project advanced.

At the concept stage, as the wheel’s structural geometry became more defined, Arup created a parametric model using GenerativeComponents, Bentley’s associative and parametric modelling system for automating the design processes and accelerating design iterations. The parametric model helped to set all the variables for the wheel geometry and discover which dimensions drove the design. The geometry was then exported to the GSA Suite for structural analysis. 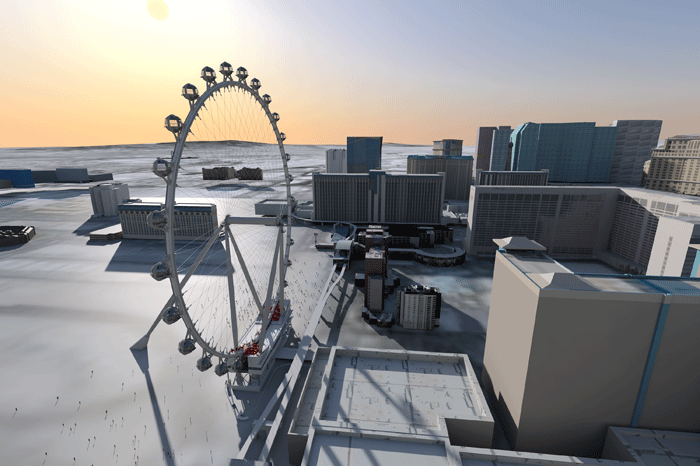 Analysis revealed that sections of the wheel would undergo stress fluctuations during normal operation. These fracture-critical elements included the rim, with heavy stress at the six o’clock position and light stress at the 12 o’clock position. Arup created detailed finite element models using LS-DYNA, a general-purpose finite element program by Livermore Software Technology Corporation, to identify the range and location of stress as the wheel completes each rotation.

The interoperability of the software applications was crucial to the process of generating accurate fatigue stress calculations. For example, the detailed rim model included every bolt, conduit attachment, lighting fixture, access hatch, etc. This rim model was created in Rhinoceros, transferred to Structural Modeler for design, imported to Altair HyperMesh (a high-performance finite element pre-processor), and finally analysed in LS-DYNA. This revealed hotspots where stresses had to be reduced; then the process was repeated.

Structural Modeler was used to combine the outputs from all other third party products into a global co-ordinated model. Even the complex manufacturing models for the drive systems created with Dassault Systèmes’ SolidWorks products were imported seamlessly via the Parasolid import functionality. An overall project co-ordination model was exported from Bentley software to Autodesk’s Navisworks project review software.

By regularly updating the Navisworks model and making it accessible to all design parties, Arup was able to interface more effectively with teams that were designing other components of the project. The fully integrated, shared geometric model encouraged co-ordination among disciplines and companies. As a result, dimensional clashes were identified early in the design process and addressed prior to fabrication, saving the client time and money. 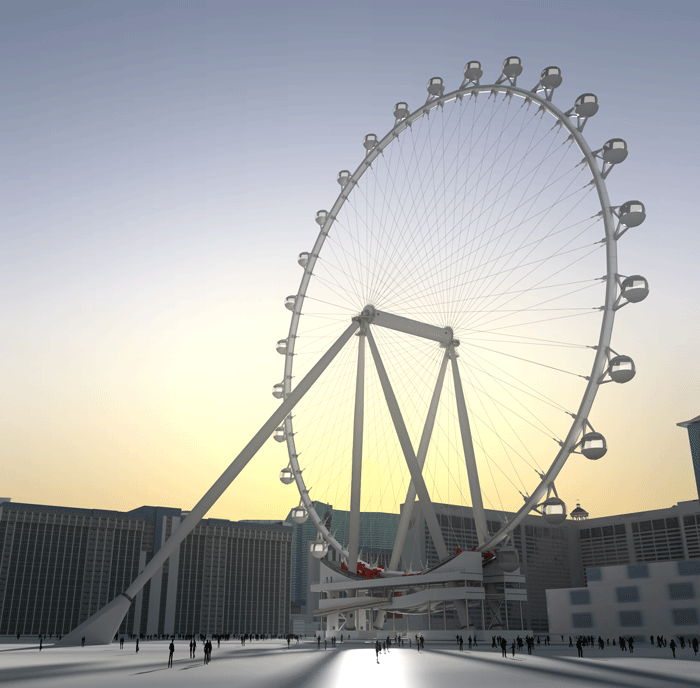 To document the project, Arup relied upon Bentley’s AECOsim Building Designer, a BIM application that enables multi-discipline teams to design, analyse, construct, document, and visualise buildings of any size, form and complexity. The dynamic view tools were used to create views of every component of the wheel. This enabled a rapid workflow that allowed Arup to meet tight project deadlines for this challenging project.

As the primary BIM application used for the High Roller, Structural Modeler provided the precision required to build a complex, atypical structure.

“The 3D modelling was vital to bring together all the custom-made elements,” Arup Senior BIM Technician Stephen Corney explained. “The integration of Bentley products with other software also facilitated collaboration among project team members. The ability to import and export various file formats from other consultants involved in the design process was instrumental to 3D co-ordination and delivery of the project.”

The High Roller design is not only structurally efficient but also yields superior fatigue performance for a fairground-style Ferris wheel. Planned to operate 18 hours a day for 50 years, the iconic ride is detailed to withstand fatigue at the point of every weld, penetration, and attachment. It will endure as an engineering feat and world-class tourist attraction on the Las Vegas Strip.