The Bradford College David Hockney Building, was designed by Bond Bryan Architects and delivered using an open BIM process, which incorporated COBie deliverables. The eco-friendly building has a light and airy feel and is sympathetic to the large-scale mill and warehouse buildings that characterise parts of Bradford. It is centred around the college’s vision of creating a space that encourages and supports innovative forms of teaching and learning.

In 2008, the college embarked upon a comprehensive redevelopment strategy funded by the Learning and Skills Council. In 2009, the LSC withdrew the funds and the college was forced to reconsider its strategy with a majority self-funded project within a volatile and challenging marketplace. With assistance from Bond Bryan Architects, it devised a reduced scale development that, at its core, retained the original aims of embracing educational transformation within a flexible environment, while realising efficiencies in space utilisation and providing flexible-use spaces to accommodate changing learning methods.

The development is approximately 24,000 m sq with a construction cost of approximately £38m. This represents outstanding value for money. At the outset of the construction works, the team were challenged to save £2m of Value Engineering. Neither quality nor vision was diluted thanks to a strong team approach, with elements of the project being enhanced collaboration on value engineering. The exceptional quality and workmanship achieved by the subcontractors throughout is indicative of this process.

Externally, the development draws upon the historic precedents set by the mill buildings situated within Bradford, while seeking to create an economic solution with locally sourced (Brighouse) natural sandstone. It pays homage to the textile industry of Bradford by replicating the concept of a fabric weave within the coloured segments of the elevations. This was created using a cladding system that allowed the builders to achieve water-tightness more quickly and was less labour intensive on site.

Internally, the scheme was viewed as a single entity collaborative space, surrounded by specialist teaching zones. This required a move away from traditional, teacher-led styles of delivery in smaller cellular classrooms, and into larger, more flexible spaces that offer a range of potential learning environments. 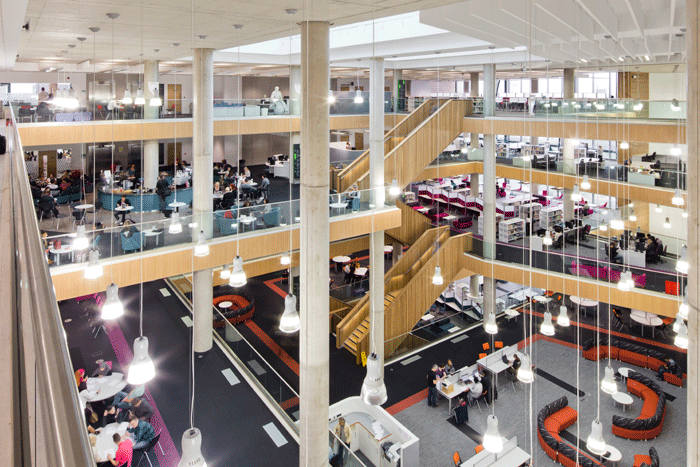 Inherent sustainability was a key component of the design and the supply chain was involved from an early stage. Lean construction workshops helped create efficiencies but also fostered an environment of collaboration. The traditional concrete frame was re-designed as a post-tensioned solution saving a third off the concrete. This reduced the amount of deliveries to the site.

All timber used was from registered sustainable sources where possible, including the plywood hoardings that enclosed the site. These were used for shuttering the retaining walls in the external works scheme. Other systems of construction were chosen with sustainability in mind.

The Building Research Establishment carried out a pre-demolition audit on the existing buildings in order to identify opportunities for recycling or re-using materials. Some 98% of these buildings were identified as re-usable or recyclable.

Since 2012, Bond Bryan Architects has focused on using open rather than native data, as they see it as an important part of their future and the future of the construction industry as a whole. Open data will lead to greater consistency and quality.

Producing consistent, high quality models and data for others to use has been the company focus for the past several years. The real implementation was driven by the Bradford College project. The aim was to demonstrate open workflows on a live project as well as to establish more consistent data deliverables for use by contractors, consultants and clients. Working with the contractor BAM Construct UK, Bond Bryan Architects immediately identified a number of issues with model exchange using the IFC open format. Within the firm, the central BIM team supported the project team to initially find temporary solutions to these issues. This was followed up with more detailed research to understand and finally resolve them.

The architects collaborated with BAM and other vendors to find permanent solutions. Centering the approach around IFC also influenced the firms’ development plan for COBie, the UK Government’s data deliverable from 2016.

“Given the plethora of software available, the most logical way to deliver this data is using IFC,” Bond Bryan Architects BIM manager and Associate Director Rob Jackson says. “Throughout the Bradford College project we discussed with BAM their data needs and began to understand how COBie could be integrated. This has resulted in us building in data as a standard deliverable for all new projects rather than an added extra.

“There is still some way to go to fully integrate but we continue to work with vendors to further integrate the remaining requirements. We are now delivering 60%-70% of the requirements of COBie due to our commitment to IFC, and this is allowing us to show others how they can benefit from our data.”

Bond Bryan Architects integrated the lessons learned from Bradford College into the model authoring tool templates. Their knowledge has led to Mr Jackson being asked to join the buildingSMART Technical Group and the AEC (UK) BIM Committee, which helps develop technology implementation guidance.

The extra effort also led to the team assisting Graphisoft in the development of a UK&I specific Archicad template released in 2014. This work not only benefitted this project, but had wider benefits for the industry by sharing the knowledge and feedback to vendors and ultimately resulting in improvements in software solutions.

In 2014, it became evident that once outputs were standardised, it was also necessary to find a way to ensure the data was correct.

Bond Bryan Architects’ models use Graphisoft Archicad as well as a variety of software to produce digital visualisations including Autodesk 3ds Max, Lumion, Graphisoft BIMx, Graphisoft Archicad, Abvent’s Artlantis, and Maxon Cinema 4D. The original visuals were produced in-house between March 2012 and June 2013, while the photographs were taken, also in-house, in August 2014.

The design team, client team and main contractor adopted a pro-active approach to the project that resulted in very few issues arising during construction. An additional project, Bradford College Advanced Technology Centre, was subsequently awarded to the same design and delivery team.

The college occupied the building in September 2014, and have reported reduced staffing costs, improved team working and student supervision along with improved student achievement levels.

The project was not only highlighted as an example for innovation in education space but also as a pathfinder project for BIM for the entire team.