In 1996 the European Commission announced an ambitious plan to create a pan-European high speed rail network as part of its wider Trans-European Transport Networks scheme. The plan envisages improvements to primary roads, railways, inland waterways, airports, seaports, inland ports and traffic management systems, so as to provide integrated and intermodal long-distance high-speed routes for the movement of people and freight throughout Europe. The recently completed 621-kilometre high-speed rail line connecting Madrid, Zaragoza, and Barcelona completes the main axis of travel of between Spain and France.

To build this vital section of the transport network, one of Spain’s leading construction companies Sacyr was engaged to redefine the geometry of the existing railway corridor in Barcelona and make room for the new line. 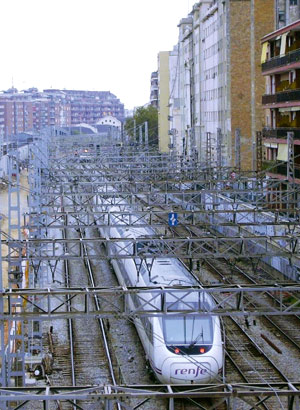 New tracks, tunnels, and platforms had to be built for the Alta Velocidad Española high-speed train at Barcelona Sants railway station.

In all, Sacyr installed more than 1,951 metres of new standard gauge line between L’Hospitalet de Llobregat, immediately southwest of Barcelona, and the Barcelona Sants station.

L’Hospitalet de Llobregat is one of the European Union’s most densely populated cities, forcing new railway corridors to be built underground. About 1,524 metres of the new track is in deep tunnels, and the remainder is in a false tunnel between piled walls. Vertical grades are as steep as 33 percent to avoid interference with existing metro tunnels and to facilitate train deceleration to 80 kilometres per hour near the railway station. “We dealt with some outstanding challenges,” said Sacyr’s railway division technical manager Arturo Zazo. The company designed and constructed two international standard-gauge, high-speed line terminations at the station, including underground routing below the groundwater table, without disrupting daily traffic of up to 600 trains per day on the six existing Iberian-gauge lines.

The existing lines required interim and new final locations, and the high-speed lines required new tunnels and loading/unloading facilities. High-tech columns in a variety of configurations provided tunnel support. “MicroStation was a great help for the critical task of checking the loading and design of these columns, particularly the 3D capabilities,” Mr Zazo said. “Interrelating these results with Bentley Rail Track’s output was also essential.” 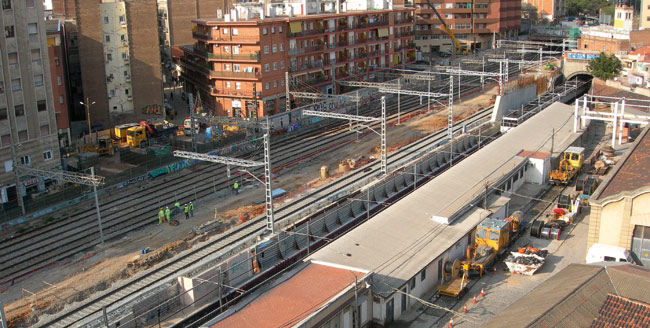 Further complicating the already difficult task of track realignment was the extremely close proximity of buildings and support structures. Not only did tracks have to be moved several times, they also had to be placed precisely with no overlap during various stages of development. Critical railroad geometries had to be maintained constantly.

“As a starting point, it was necessary to thoroughly and accurately record the existing geometry of every track as well as the actual location of each and every turnout,” Mr Zazo explained. “This preliminary study helped us to define and design the interim and final location of tracks and turnouts, and it helped us to minimise the interference at different phases of construction.”

Bentley Rail Track alignment design software and InRoads were used to co-ordinate this critical work. The ability to calculate track geometry that adhered to different parameters was essential to designing track layouts. Specifically, the ability to put in constraints such as restricted clearances, tunnel crossings, and time-variant constraints related to demolition and new structure allowed Sacyr’s team of 50 designers to work quickly and test multiple solutions. Using 3D analysis facilitated interference and obstruction studies. This rapid design prototyping was enhanced by the ability to output graphic calculation results quickly. 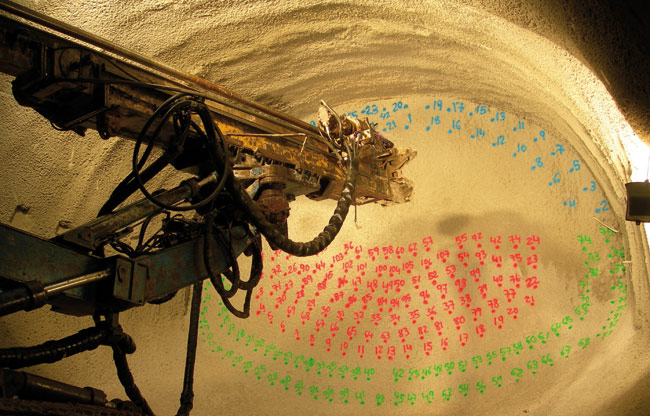 Spain opened its first Alta Velocidad Española high-speed train route in 1992, between Madrid and Seville. The network has grown to nearly 2,000 kilometres and stretches from Malaga on the south coast to Barcelona, which is north and east.

The line has reduced travel time between Madrid and Barcelona from six hours to about two hours and 40 minutes, with 17 trains running at maximum speeds of nearly 300 kilometres per hour from six in the morning to nine at night daily. About six million passengers used the service in its first year. By 2011, nearly eight million passengers are expected to use high-speed rail as an alternative to auto and air transportation.

“We couldn’t have done this work without the ability to combine the precise railway geometry needed with the ability to check 3D constraints in the model — especially since we had to work through many solutions quickly in order to accommodate interim track layouts,” Mr Zazo said. “Bentley software provided us with a comprehensive portfolio of essential applications to face any kind of civil infrastructure challenge — technology, power, flexibility, and efficiency all in one.”

Spain’s Iberian gauge railroad tracks are incompatible with the tracks of surrounding countries, so another important benefit of completing the Madrid-Zaragoza-Barcelona line is that it forges a rail connection between Spain and the rest of the continent.

Integrating new, high-speed lines into existing facilities is a complex task requiring not only exceptional design skills, but also rigorous attention to logistics to ensure that ongoing and vital transportation is not disrupted. By using the right tools to perform rigorous as-built surveying, maintain critical track geometries, and eliminate obstructions and interferences, Sacyr completed a milestone project while keeping Spanish transportation on track.