The Goodwood Festival of Speed is famous for its celebration of motoring. The annual hill climb features historic motor racing vehicles and every year it brings together some of the greatest competition cars and drivers from the world of motor sport. Famous faces have included Sir Stirling Moss, Jenson Button, Lewis Hamilton, Fernando Alonso, Nigel Mansell and Mika Hakkinen.

The Land Rover central feature outside Goodwood house towered above the milling crowd.

Held in the grounds of Goodwood House, West Sussex, it was first started in 1993 by the present Earl of March in order to bring motor racing back to the Goodwood estate – a location steeped in British motor racing history. From 25,000 visitors at the inaugural 1993 event, attendance at the Festival of Speed has grown to accommodate 150,000 visitors each year.

The racing centres outside Goodwood house, where each year a stunning visual display is erected to wow the milling crowd. In 2008 designer Gerry Judah, alongside a structural engineer and metalwork company, Littlehampton Welding, created a crowd-stopping super-structure from 106 tonnes, or 3,415 separate parts of grade S275 mild steel.

The Land Rover Central Feature, built to celebrate the 60th anniversary of Land Rover, rose 35 metres above the crowd and spread out 26 metres in girth. The hollow nest-like display consisted of a lattice-like construction of welded frames with single rakers between the frames.

Featuring five Land Rovers fixed to the steel structure and suspended above the passing crowds, the display was left unpainted to give it a rugged, rock-like texture, as though the vehicles were traversing a particularly rocky terrain.

The outstanding design concept was made possible through the use of 3D Building Information Modelling (BIM). Littlehampton Welding used Tekla Structures 13.1 BIM software to simplify a very complex 3D structure onto 2D workshop drawings, which were used to fabricate the structure.

The project called for an exacting set of design and build standards to be met. As the structure was intended for display at a specific event, completion beyond the schedule was not an option. The structure had to be fabricated as simply and efficiently as possible, while costs had to be kept to a minimum. In addition, as the heavyweight structure was suspended above the crowds below, it was vital that it was constructed accurately with no room for error as the safety of visitors to the festival was of the highest importance.

Featuring five Land Rovers fixed to the steel structure, the display had a rugged, rock-like texture, as though the vehicles were traversing a particularly rocky terrain.

To achieve this, Tekla Structures 13.1 BIM was used to create and share the model with all stakeholders involved in the project. The structure was modelled by a single Tekla Structures user working from a 3D analysis model in DXF file format produced by the structural engineer.

Due to the very tight schedule it was important that the build process start as soon as possible. Fabrication at the lower levels of the structure began while the levels above were still being drawn and the upper sections were being fabricated as the first sections were being fitted on site. Steve Horrod, senior draughtsman at Littlehampton Welding, explains the process: The structure was designed on a 1,500 square grid.

We accurately marked out this grid onto our steel workshop floor and built each frame to this grid. This saved a lot of time having to keep setting-out each frame and increased the accuracy of the fabrication.

Having confidence that Tekla’s 3D model was correct meant we could start fabrication of the lower frames while still modelling the frames above.

Detailed design plans helped to increase efficiency throughout the project. Visual decisions, such as where to place the cars, for example, were able to be made as the structure was constructed. 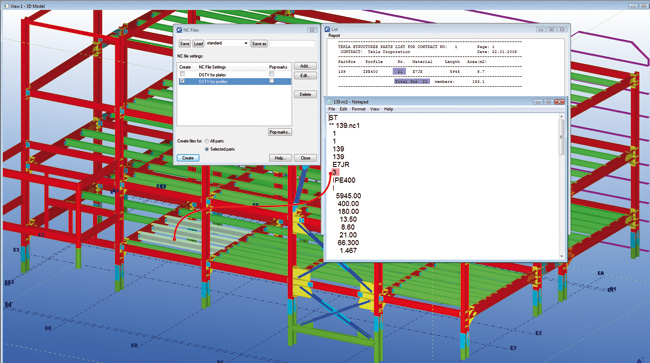 Having a 3D model enabled isometric drawings of each phase to be produced, therefore giving the site erectors a very visual interpretation of the complex structure they were building, explains Mr Horrod.

Tekla’s 3D model enabled decisions on the location, and position of the cars on the structure to be made, to ensure that a high visual impact was achieved, says Mr Horrod. By taking coloured ‘snapshots’ of the model this information was easily passed onto the designer for his approval.

Tekla Structures gave Littlehampton Welding the ability to export parts of the structure as 3D DXF files to enable the engineer to check the model as it progressed without having to produce a lot of extra drawings.

That also meant a reduced margin for errors as the build progressed. Through the ‘snapshots’, the engineers and designer could see at a glance if there were any particular problems that needed resolving, meaning time saved on site where it mattered most, says Mr Horrod.

The software also allowed Littlehampton Welding to communicate better with its client Land Rover UK by providing 3D images which gave an accurate impression of what the completed structure would look like and to provide an idea of what the patrons at the show would see from their position on the ground.

With improved communication, and a concurrent fabrication and build process, Littlehampton Welding saved six days on site, completing construction in three weeks, and cutting costs on staff and plant hire. The company had planned to work weekends in order to complete the structure within the desired timescale, but found there was no need for it. The goal of creating an eye-catching display piece, ready to be exhibited at the Goodwood Festival, was met on budget and ahead of schedule.

The Land Rover Central Feature was a fitting celebration of engineering and motor sports, which was only just overshadowed by British racing sensation Lewis Hamilton, who starred in the final day’s events. Fresh from his British Grand Prix victory at Silverstone, the teenager joined the celebration with a series of demonstrations aboard his F1 car.

Six days later the Land Rover Central Feature was dismantled and removed from the site. The grounds of Goodwood House were peaceful once again, waiting in anticipation for next year’s festival and the tests of motoring and engineering it would bring.