The Great Western Electrification Programme represents an investment of £1.5 billion that will allow faster, quieter travel, with increased seating capacity, and improved reliability on one of the United Kingdom’s oldest and busiest railways. This program will enhance the railway line between London and Oxford, Newbury, Bristol and Cardiff.

With a project of such scope, owner-operator Network Rail needed a way to incorporate enormous amounts of survey data with design models from multiple consultants, to aid efficient project collaboration and streamline interactions between designers and contractors.

The Great Western Electrification Programme will enhance the railway line between London and Oxford, Newbury, Bristol and Cardiff

In addition, to encourage efficient data collaboration and increase productivity, Network Rail followed the BS 1192 code of practice for the collaborative production of architectural, engineering and construction information.

When construction is complete, Network Rail will then be able to use the 3D information model to support its asset management program.

Among this project’s many requirements is the need to assess, retrofit, or construct significant amounts of infrastructure, including 1,000 kilometres of single-track, 12,000 steel piles and 4,000 reinforced concrete foundations, and 164 structures that require gauge clearance analysis – including bridge interventions, lowering of track, canopy cuts, and more. Managing such a project requires efficient collaboration between Network Rail and the organisation’s many business partners and subcontractors.

Using Bentley Descartes, Network Rail has established a scalable 3D information model as the geo-coordination platform to aggregate the as-constructed and design information, including scalable terrain models, orthoimages, Bentley i-models (containers for open infrastructure information exchange), and DGN files. The model is used to streamline the interaction between design consultants and contractors by enabling the coordination in a 3D environment of all the designs from design consultants.

By combining a large terrain model draped with thousands of orthoimages, point clouds acquired by helicopter, and designs provided in the DGN format and i-models – which Bentley Descartes supports natively – the scalable 3D information model provides a unique environment to enable collaborative review, condition assessment, and construction simulation together with 4D animations.

But the value of the 3D information model goes beyond the design and construction phases, to support Network Rail’s longer-term asset management program by providing a live 3D map that indexes and references asset documentation. As a long-time user of Bentley software, Network Rail uses ProjectWise as its engineering information management platform to enable team collaboration and data exchange in a secure environment among all partners and stakeholders.

John Nolan, CAD manager at Network Rail explained, “We have been early adopters of Bentley Descartes V8i (SELECTseries 4) and this new release provided us with exactly what we needed. The software’s ability to create scalable terrain models now allows us to create and manage terrain models with hundreds of millions of points. With its fast scalable terrain model manipulation and very powerful modelling tools, Bentley Descartes allows us to integrate point clouds and engineering data into intelligent hybrid models.” 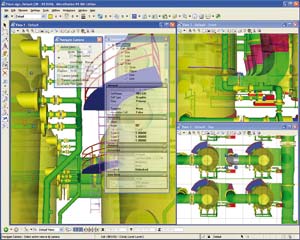 Some of the challenges of this project included the lack of up-to-date information on existing assets and potential inaccuracies in existing documentation. To provide surveys of the existing track conditions, data acquisition was outsourced, with aerial LiDAR used for open areas and laser scanning technology for tunnels. High resolution orthoimages were also acquired. The point clouds were coloured and classified initially as ground and non-ground classes.

In order to assess vegetation for clearance, the non-ground point-cloud data was also merged into the 3D information model. By integrating the coloured point cloud of the vegetation into the model, Network Rail was able to identify vegetation areas that needed to be reduced to meet the necessary clearance for the new overhead electrical infrastructure.

John Nolan explained, “The modelling capability of Bentley Descartes V8i (SELECTseries 4) addresses tunnel modelling perfectly. By defining a template of the tunnel cross-section and adjusting this template along the alignment, we were able to model tunnels in 3D with real-time visualisation of the generated 3D surface, which allowed us to assess quality as we digitised the model.” 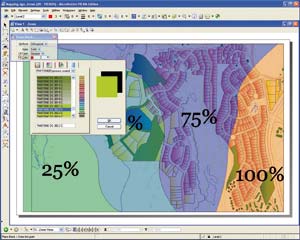 In addition to streamlining the process among suppliers, and supporting BS 1192, the creation of an information rich scalable 3D model including terrain data, point clouds, orthoimages, and i-models, provides numerous opportunities to extend the project’s return on investment from the project.

The integrated model allows the creation of 4D schedule simulation showing each construction phase, supports project review, enables clash detection, and also allows driver training and signal sighting. In addition, the model is very effective for showing local authorities and individual landowners what effect, if any, the overhead line electrification (OLE) works will have on them.

The Great Western Electrification Programme is currently in the design and construction stage, but Network Rail is already planning for operations and maintenance by establishing an intelligent information model to support long-term asset management.

The scalable 3D information model will be reused and enriched to aggregate engineering files including DGNs and i-models, and to index asset information. Asset documentation, PDFs, images, and videos, are managed with ProjectWise and indexed in the scalable 3D information model. Users can therefore navigate and interact with the 3D model, and, by clicking on an asset, access associated documentation stored in ProjectWise.