The 3D lidar scan is a game-changer for architectural practices. Here, Jacob Down of Poynton Bradbury Wynter Cole Architects draws on the firm’s experiences with the technology to explain why he thinks it will soon become more widespreadT

Over the last 12 months, there has been a fundamental industry shift in the techniques used by surveyors to capture the spatial volumes and site features of landforms and buildings.

Surveyors are no longer relied upon to judge which site or building features should be measured and recorded. This decision-making process, previously subject to the discretion of a human, has been handed to machines. Human subjectivity is no longer an issue. A passing seagull can now be surveyed with the same precision and accuracy as a downstand beam, thanks to the rise of the 3D lidar scan within architectural practices.

Here at Poynton Bradbury Wynter Cole Architects in the picturesque seaside town of St Ives, far from my architectural upbringing at the Bartlett School of Architecture at University College London, I was fascinated to discover that many local surveying firms now utilise 3D lidar scanning technology. This enables them to capture the spatial data necessary to produce their conventional 2D site topographical and 2D measured building surveys.

Having experienced first-hand the technology in my Bartlett years, I was already familiar not just with the immense accuracy of full-colour HDR point cloud outputs, but also their deeply seductive imagery. I therefore knew that it was only a matter of time before the 3D lidar scan became a key component of our architectural workflows, superseding conventional 2D survey drawings.

The benefits of utilising the technology were demonstrated at Rock House, a two-and-a-half storey replacement dwelling on Carncrows Rock, deep within St Ives’ conservation area. The design for this project sees a historic north gable retained, with the remainder of the building replaced by a contemporary reinterpretation of the existing one, maintaining its sea views and providing new ones from a mezzanine viewing platform.

A 3D lidar scan was undertaken by CESurveys and used to capture the existing building and immediate surrounding context to forensic levels of accuracy. Most notably, this included the complex geometry of the granite outcrop on which the building was situated; the architectural scars present on the undulating granite of the north gable; and the sensitive nature and unique characteristics of the conservation area and Grade II-listed cottages immediately adjacent.

By nature of the scanning process, the occupation and the ‘flavour’ of the place were captured and frozen in time as the geometry of the common and banal were captured alongside bricks and mortar. All of this data, captured as a precisely measured set of full-colour or greyscale points in space, can now be digitally revisited, inspected and interrogated remotely at any time in the future.

More conventional surveying techniques would not only have been problematic, but also would have produced drawings of limited use, offering limited information.

The point cloud data generated from the scan, correctly positioned in cartesian space, was issued by the surveyors. Utilising Autodesk Recap 360, the point cloud could then immediately be viewed and interrogated by architects. They could then take dimensions from any point to any point and rotate and view the scene from any angle, internally or externally, enabling them to examine aspects of the site that may have been unattainable in the real-world physical context.

Furthermore, this data was then linked directly into Autodesk Revit, becoming a fundamental point of reference from which the proposal was developed. Parts of the existing point cloud were manipulated or omitted within Recap 360, creating multiple variations to meet the project requirements. The end result is a series of point clouds linked into the Revit model, which can be strategically turned on and off to fulfil the purposes or demands of the drawing or BIM model.

Challenging features of the site, such as the complex geometry of the rocky outcrop, the proximity of neighbouring windows with their inherent issues of overlooking and rights to light and the need to maintain the property’s sea views were all examined in plan, section, elevation, 3D axonometric and 3D perspective through the presence of the point cloud.

This enabled the practice to foresee and design out any areas of contention very early on in the design process, resulting in a smooth and successful planning outcome. The point cloud is now informing the technical design and site logistics for the project as it progresses towards a start on site for late autumn. 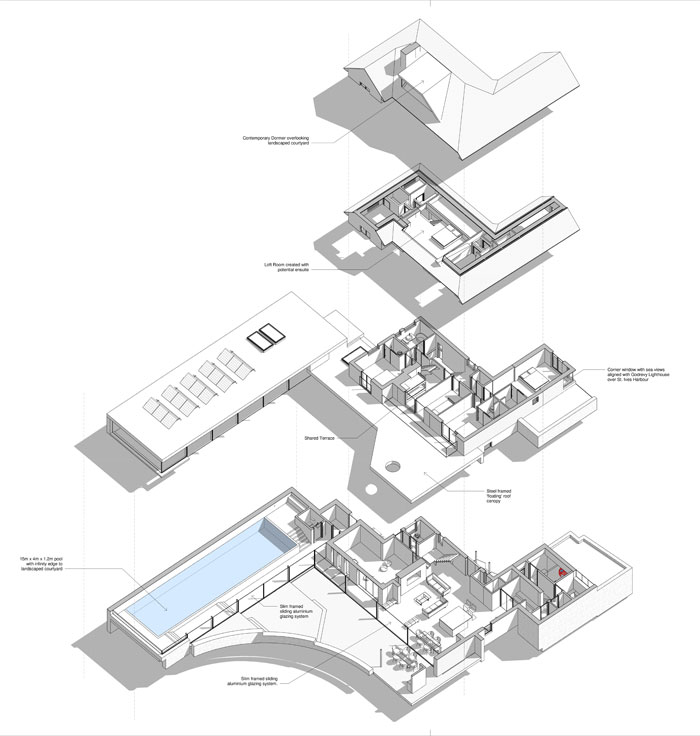 Axonometric view of a proposal for the Old Vicarage, a private dwelling also situated in St Ives’ Conservation Area

A dip in the Jubilee Pool

Our work on the Jubilee Pool, an Art Deco, Grade II-listed structure situated on the eastern end of Penzance’s promenade, also utilised the 3D scanning technology. The project involved the design of a universally accessible pedestrian route from promenade level to water-entry level, linking a myriad of sweeping curved platforms of varying levels in between.

With the need for Listed Building Consent, the point cloud of the existing was spliced with proposed ramped interventions, providing highly accurate 3D imagery for the client and for obtaining statutory consents.

The key difference of this 3D imagery from the conventional rendered and Photoshop montages more commonly seen in the profession is the geometrical accuracy of the surrounding context. The point cloud freezes the three-dimensional properties of the space to within accuracies of 1mm. This data, combined with the proposal in the same digital space, enables any view or angle of the proposed to be generated in perfect perspective, arming the architect with a powerful tool to confidently illustrate how one’s proposal will sit in its surrounding context, within these given tolerances.

Furthermore, the digital camera can be manoeuvred through the scene in real time, or rendered out as animation, providing viewers with a perspectively perfect parallax experience of the proposed design.

The view from the Old Vicarage

A project that explored the potential of the point cloud a step further took place at The Old Vicarage, a private dwelling situated in St. Ives’ Conservation area. The project involved extensive remodelling of the existing building, along with the inclusion of a pool house in a private courtyard to the rear.

Following a 3D lidar scan undertaken by 3DMSI, the existing building was remodelled in Revit through close utilisation of the point cloud. In turn, the architectural proposal was developed from the client’s brief, as well as from the physical site constraints and site opportunities, all of which were captured in the point cloud data.

Although the building was less than 80 metres from the ocean, it struggled to offer any substantial sea views. However, by combining the lidar data of the site and its immediate surrounding context with lidar data captured from the air of the landscapes of St Ives and Godrevy, a landmark vista towards Godrevy Lighthouse over St. Ives Bay and harbour was created from the proposed bedroom extension. This was framed through a glazed corner window and aligned with the summer solstice sunrise when viewed from bed level.

A 6.5km section was drawn, illustrating the line of sight from the bedroom window to the local landmark across St Ives Bay. This was backed up with a digitally generated 3D perspective of the framed vista, demonstrating the landmark’s presence through the tanglement of the town’s fabric from the proposed bed level.

By combining detailed site scans with airborne landscape scans, architects can look to develop truly site-specific architectural responses that capitalise on key views, vistas and site assets at landscape scale. They can also foresee and design out issues around overlooking, overshadowing and rights to light at a forensically intimate scale.

The 3D lidar scan is a game-changer within architectural practice. It presents architects with unprecedented levels of geometric site information, reducing tolerances and margins for error, helping to de-risk projects prior to commencement on site, and opening up huge design opportunities through new levels of accuracy.

As the technology and associated software advances, it is the manipulation of the native point cloud data itself that will prove most valuable, for it is within the points that the accuracy lies. As scanto- BIM applications become more prevalent and refined, moreover, it is only a matter of time before we see widespread adoption of 3D lidar scans throughout the industry.